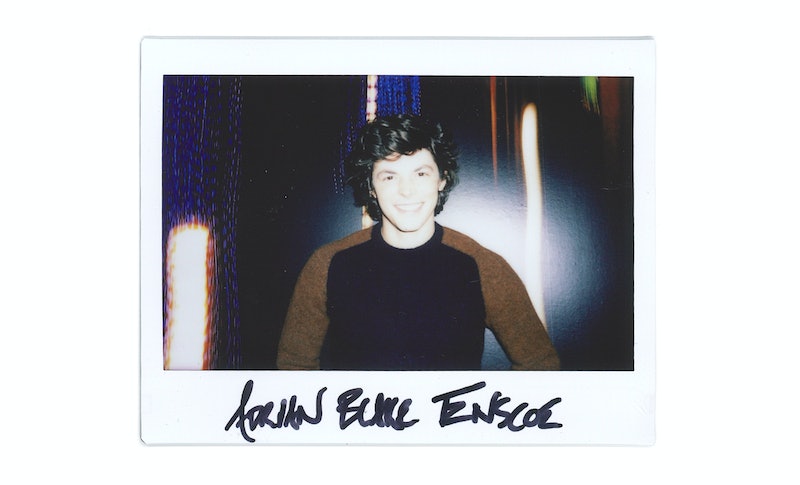 When celebrities hang out with Bustle writers, we want to give them the chance to leave their mark. Literally. So we hand them a pen, a piece of paper, a few questions, and ask them to get creative. This time, Dickinson's Adrian Blake Enscoe is leaving his mark in the Bustle Booth.

In preparation his first-ever starring TV role on Apple TV+'s new series Dickinson, Adrian Blake Enscoe went down a deep Emily Dickinson rabbit hole. "There’s a couple of amazing blogs dedicated to the history of Amherst College," he says, referring to the school in the Massachusetts town where the Dickinson family lived. "They have everything. It's like a whole universe."

Enscoe's role in the Emily Dickinson Universe? Austin Dickinson, the poet's older brother and Amherst's resident heartthrob. "He’s kind of a quintessential dude," says Enscoe, a theater actor who also plays in the band Bandits on the Run. "I just really tried to play into thinking of myself as a straight G, you know?"

That rather modern character description is fitting for Dickinson, which is part 19th century biopic and part 21st century fantasy. "We’re basing a lot on actual facts," Enscoe says, "but also there’s the aspect of Emily’s poetry and the imagery in her poems that is kind of being combined in a surreal fashion with her real life."

Some of Dickinson's most bizarre moments include Wiz Khalifa as the corporeal embodiment of Death inviting Hailee Steinfeld's Emily into his carriage to smoke a blunt, and a house party in which the teens do opium, talk to a sentient bee, and twerk in corsets. While it's not exactly the teens-gone-wild drama of Euphoria, the series created by Alena Smith casts Steinfeld's Emily Dickinson as a Gen-Z icon who is more woke and definitely much hornier than we've ever seen her before.

It's why Enscoe wanted his character, who is stuck in a love triangle with his sister for the affection of his fiancée Sue Gilbert, to feel relatable to now. Growing up in the small upstate New York town of Earlville where there was one traffic light and an opera house, Enscoe understood small-town hierarchy. "I really dove into the symbols of status that Austin occupies," he says. "Having a horse, a father who is congressman, having a house built right on the main street, that's a big-ass deal."

Austin is more than just a rich kid, though. Through Emily's constant pushing of the boundaries, he's starting to understand his privilege and how it's become a cover for his insecurities. "I like to think he’s not his father Mr. Dickinson, he’s not steeped in the patriarchy to the point where he can’t see it at all," Enscoe says. "There is hope for him."

For those obsessed with Enscoe's hair in Dickinson, which is modeled after the real Austin's luscious locks, there's also hope for you, too. "The hair has its own arc," he jokes. "It’s funny, you’re building each little part, every little wing," he says of the look that took 40 minutes and five different products to achieve. "We kept being like, 'How did the guys in the 1850s do this all by themselves?'"

That question may be rhetorical, but Enscoe did offer answers to some of Bustle's questions in his Bustle Booth questionnaire below.

More like this
Keyla Monterroso Mejia Is Finally The Star Of The Show
By Gabrielle Bondi
Armani Jackson Is Following In His Famous Actor Sister’s Footsteps
By Catharina Cheung
'Consent' Is Not Just One Person’s Story, But Hundreds
By Shahed Ezaydi
Hailee Kaleem Wright's Topsy-Turvy Path From MTV To Broadway
By Samantha Leach
Get Even More From Bustle — Sign Up For The Newsletter
From hair trends to relationship advice, our daily newsletter has everything you need to sound like a person who’s on TikTok, even if you aren’t.