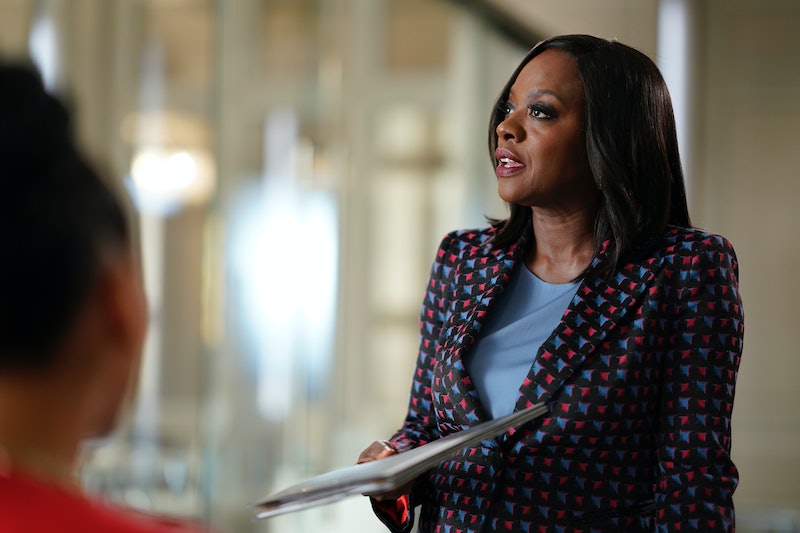 The mystery of How To Get Away With Murder Season 6 has centered on Laurel and Christopher’s disappearance — was she taken by her family? Did she slip away on purpose? Is she even still alive? Of course, Annalise Keating is in the middle of it all, because Annalise may have helped Laurel disappear on How To Get Away With Murder. That’s right — the woman who has proven to be a liar over and over again has probably lied about one more thing.

Frank has been hot on Laurel’s trail (at least, he thinks he is) since Season 6 opened, because he loves her and he wants her to come back. Enter a deserted warehouse, Laurel’s brother Xavier, and Frank getting nearly beaten to death by Xavier and his goons. Xavier and Frank both want to know where Laurel is, and according to Xavier, all signs point back to Annalise — for a tidy payment from Laurel, Annalise allegedly helped her escape. And yes, Annalise does have an account at that same offshore bank that Laurel’s family hides their money, but she swears it's just a coincidence.

It’s unbelievable that Bonnie still believes Annalise’s excuses and lies. When Bonnie approached Annalise about the money, Annalise said she had squirreled away some cash in case Bonnie and Frank leave her and she has to start over, which is the definition of gaslighting. Even if Bonnie and Frank left Annalise all alone, Annalise is a whip-smart attorney with the ability to crush any case. She won a class-action lawsuit against the government! Any blame she tossed at Bonnie and Frank was simply to make Bonnie feel bad, because Bonnie always feels bad when it comes to Annalise.

But it still doesn’t explain why Annalise has that much money at the same Caribbean bank the Castillos operate from. At the end of the episode, Annalise discovers that her money in that bank is actually gone, and she doesn’t know why. So if Laurel did pay her, someone else has that account number and was able to withdraw money. Was it the FBI? Was it Laurel, who had maybe given Annalise the money for safekeeping until she was able to take it out of the account? Anything is possible at this point.

Post-rehab, Annalise is out for Annalise, as showrunner Pete Nowalk told Variety. “She got some really clear advice,” he said. “It’s the life preserver rule, you put it on yourself first and then you try to save someone else.” Nowalk continued to say that Annalise’s actions in Season 6 are “heroic” in a way because she is sticking with this group of murderers (even though she is a murderer, too, technically), but it’s hard to see it that way. Annalise has been complicit in everything the Keating 4 has done. All the killings, all the lies, all the investigations — they all go back to her. She’s the adult in the situation here, so whether or not she means to be, she’s responsible for everything that has happened up until now.

When Annalise is backed against the wall, like she is here because of her money being gone and the Keating 4 losing trust in her, she lashes out. Things will only get worse. Now, it seems, she’s helped Laurel slip away from her. The question is why, and it’s clear we won’t know until How To Get Away With Murder starts to wrap things up. But one thing is for sure — Annalise has a lot of explaining to do.