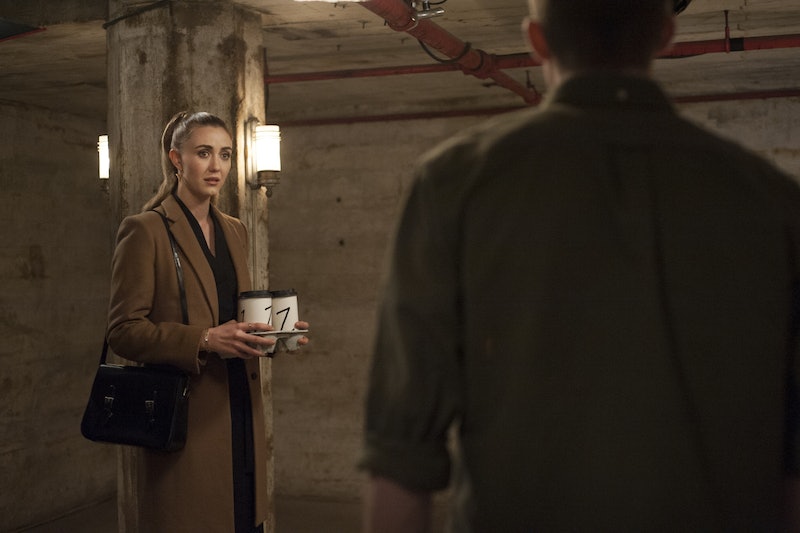 The premiere of the Twin Peaks revival revisited the tone of the original series, when it killed off Tracy and Sam in a scene that began in satisfaction and ended with terror. This moment, both bloody and horrifying, may indicate that the malevolent presence from the first two seasons is still around. Has BOB returned to Twin Peaks to do more damage? Did BOB kill Tracy and Sam?

Experienced Twin Peaks fans, may have caught on to a potential explanation. The doomed couple, played by Madeline Zima and Ben Rosenfield, were hooking up before the faceless creature appeared in the glass box Sam was meant to be monitoring, shocking viewers and frightening the characters. This is BOB's Modus Operandi. The entity thrives on both fear and pleasure, mixed with a little perversion.

BOB (played by Frank Silva in Twin Peaks Seasons 1 and 2, plus the movie Fire Walk With Me) is representative of the darkness that supplies most of Season 2's narrative arc. And there is definitely potential for a character like this to return again in the revival. Was Tracy and Sam's murder BOB's announcement that he's still around?

The last time anyone has seen BOB is when he possessed Agent Cooper's body at the end of the original series, with the real Agent Cooper being imprisoned in the Black Lodge. When Twin Peaks returned, Evil Cooper — looking very BOB-esque with his long hair and creepy persona — is thoroughly enjoying his stay while the real Cooper has been trapped for 25 years. Is BOB still working through Cooper? Can he leave that body and do things independently?Figuring out the who, where, or what of BOB may be one of the trickiest parts to the revival.

Strangely, the story of Silva coming to play the demonic BOB is in perfect harmony with Twin Peaks and its quirky, unsettling nature.

According to Twin Peaks set lore, appearing in pieces on sites like Slate, Silva was originally a set dresser on the series. He was apparently standing in the wrong place for one particular shot featuring Grace Zabriskie, who played Laura's mother Sarah Palmer. His reflection appeared in the shot in a mirror behind Zabriskie, and David Lynch was inspired to include it in the final cut. BOB was born.

Unfortunately, Silva passed away in 1995. Without the actor to reprise his role as BOB, fans will have to use their best Agent Cooper skills to determine who or what represents the BOB presence in the revival. While BOB's appearance in the original series was brief, his creepy demeanor and what he's capable of in terms of violence remain a powerful thread throughout Twin Peaks.

Since BOB originated as a reflection in a mirror, it could be argued that a glass box is a logical next step. And Tracy and Sam's deaths were creepy, bloody, and weird, which are all staples whenever BOB is involved. As the resident Twin Peaks demon, BOB is capable of the level of carnage brought the pair, but whether he actually killed them — or something else terrible has surfaced in New York City — still remains unseen.