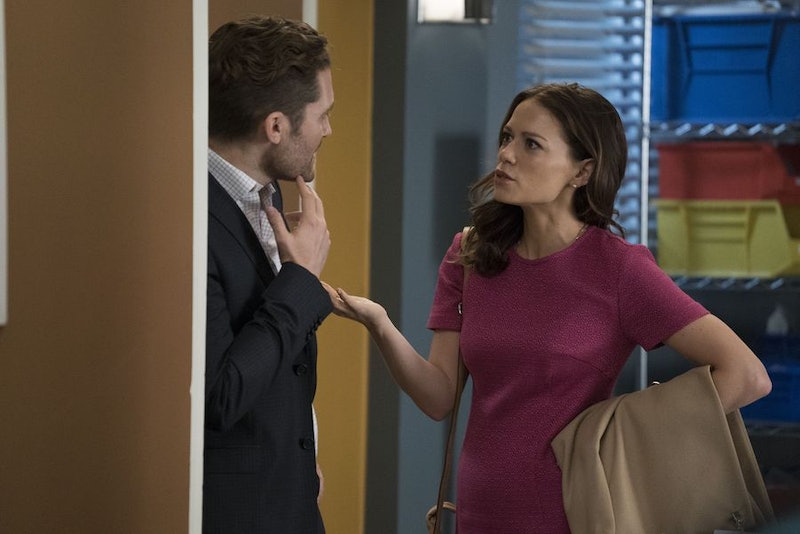 Grey's Anatomy (executive producer, 152 episodes: Krista Vernoff) has never met a serious topic it didn't like, and in "1-800-799-7233" it tackled domestic violence. (The episode is named after the National Domestic Violence Hotline.) Paul Stadler, Jo Wilson's abusive husband, had finally found her, and he let her know that he can come back at any time. It's not completely surprising, then, that Paul ended up in a hit-and-run crash hours later. The list of suspects, though, is longer than you might think - did Jenny hit Paul with her car on Grey's Anatomy?

Like any good manipulator, Paul came prepped to Grey Sloan and with his fiancée, Jenny, in tow. In a moment alone, Jo gave Jenny the low-down of the horrific abuse, and Jenny still left with Paul. It's easy to assume that Jo or Karev, who has distinct and definite impulse control issues, decided to take Paul out. Paul threatened Jo, and with Paul still alive, Jo knows that he could make her life a living hell. Jo doesn't want that. Karev doesn't want that. And so… they could have made a decision to have an accident. And even though this was a violent act, especially with how badly Paul used to beat Jo, I do understand it.

But we can't discount Jenny. While they were alone, Jo told Jenny the excesses of Paul's abuse. She said:

Through all of that speech, Jenny's face changed. It was subtle, but it was the recognition of a woman that knows that the call is coming from inside the house, and she sure as hell needs to get out. Jenny may have gone home with Paul, but she also could have realized that she can't end up like Jo did — or worse. If Jo hadn't left Paul, there's a distinct chance that he would have killed her. A man like Paul could easily kill Jenny, too, and maybe, for a fleeting moment, she thought that hitting him and killing him was her way out.

Of course, this gets complicated, because in the preview for "Personal Jesus," Jenny tells Jo that she won't tell anyone it was Jo who was driving.

Say what? Both women have motive and opportunity to kill Paul, so maybe this is a "let's tell them we both did it" thing so that the cops really never know who hit Paul. Both Jenny and Jo stand to gain if Paul isn't around. It's the only way they'll both remain safe.

Though viewers don't yet know who ran over Paul, one thing is for certain - Paul's visit to Grey Sloan has emboldened Jo to move forward. Camilla Luddington, who plays Jo, told TVGuide, "I don't know if moving forward, she would necessarily feel so open to describe [the abuse] to someone again. But I do think it's the beginning of Jo finding her voice. Even though [Paul] threatened her, I think we'll see [her] grow in confidence… I don't think she feels that she is silenced anymore."

Did Jo hit Paul? Did Jenny? Did Alex? Grey's Anatomy (producer, 80 episodes: Elisabeth Finch) will hopefully reveal the assailant, but in the meantime, viewers can be thankful that Jo's ordeal with her abusive ex is (hopefully) nearly over.