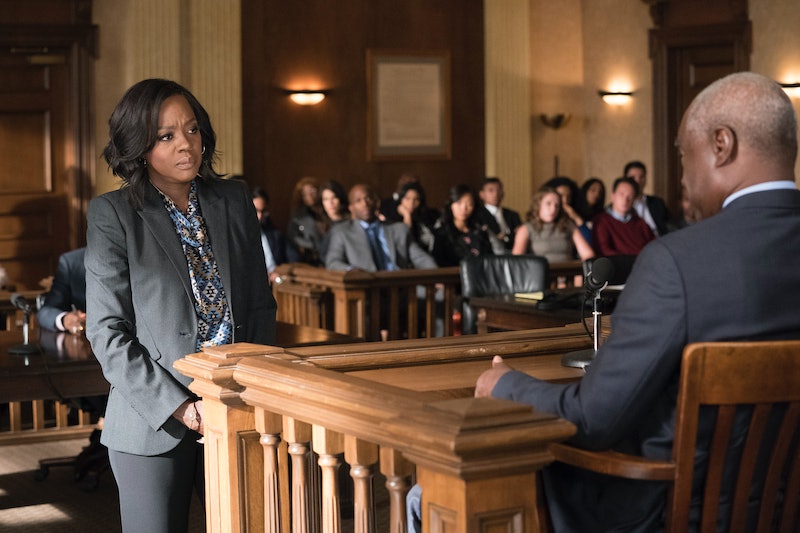 Annalise Keating is a woman of secrets, but for Season 5 of How To Get Away With Murder, the show has shifted to the secrets of the others — Bonnie, Gabriel, Frank. Annalise is just facilitating the secret keeping while also trying to bring upon a serious class-action lawsuit to the state of Pennsylvania. She was working with Governor Birkhead, who Annalise believes was being Nate's dad's murder. But when she threatens her with a press conference, Birkhead drops a bomb. She says she'll reveal "the adoption papers" on HTGAWM if Annalise does anything to threaten her political reputation. Oh, dang — adoption papers? What else are these people hiding?

Let's recap a bit, because this season has been a whirlwind of scandal, conspiracy theories, and a very real, important ongoing case challenging the criminal justice system. After working out a deal with Annalise to get Nate's father pardoned for murder, Birkhead had her own prison security guards kill Nate Sr. and then attempt to cover it up by making it seem as if Nate Sr. was violent and they were just trying to restrain him during transport.

No one believes this story, though. The collective reaction of the cast members on the show when they heard this version was, "Yeah, right." But when Annalise called out Governor Birkhead to tell her that she was coming for her, Birkhead first try to gaslight Annalise, telling her that she sounded irrational and "unstable." When Keating just wouldn't quit — because that's not her style — Birkhead told her that in a background check, some adoption papers with Annalise's name had come up. And that these adoption papers could ruin her image, yet again, just when she had rebuilt it in the Philly legal community.

Longtime viewers know that the only baby Annalise had was a stillborn, killed when she was in a car accident many years ago. Annalise is still (rightfully) destroyed from her son's death, so it doesn't seem possible that she's been lying about her son's death this whole time. Is the baby actually alive and she gave him up for adoption and everything we've seen so far about that storyline is a lie? Could be, but even Annalise has limits to her own madness.

That leaves two more options as to who the adoption papers could refer to; Wes, who is dead, and Gabriel, our new resident mystery student. Frank has a tail on Gabriel, and he's trying to figure out any and everything about this kid. Nothing of substance so far, but the fact that Gabriel is dead-set on getting an invite to Connor and Oliver's wedding is a little suspicious.

Numerous rumors abound on the Internet that Gabriel is Bonnie's son — she was raped and gave birth to a baby when she was 15 years old. Though her family said the baby died, the baby was actually taken to a hospital by Bonnie's father and sister and then taken back by her sister to be given to another family.

Bonnie just found out that her baby isn't dead, and she's taking it hard (obviously). She's been lied to her whole life. What if Annalise had something to do with Bonnie's son being given to another family? Arranging an adoption under total secrecy from Bonnie? Bonnie would never forgive Annalise for this, and it's something that Birkhead may have insight into — Bonnie works for the District Attorney, who works for the Governor. Don't underestimate this Birkhead lady.

No matter how you slice it, Annalise's adoption papers on How To Get Away With Murder spell trouble for the star attorney, and just as she was beginning to get everything back together. Figures.

More like this
Here’s When 'She-Hulk' Takes Place In The MCU
By Brad Witter
How Marvel’s 'She-Hulk' Changes Her Comic Book Origin Story
By Brad Witter
Here’s Why 'Pretty Little Liars: Original Sin' Season 2 “Won’t Be The Same”
By Kadin Burnett
17 Years Ago, 'Hannah Montana' Reportedly Almost Cast This 'Gossip Girl' Star
By Grace Wehniainen
Get Even More From Bustle — Sign Up For The Newsletter