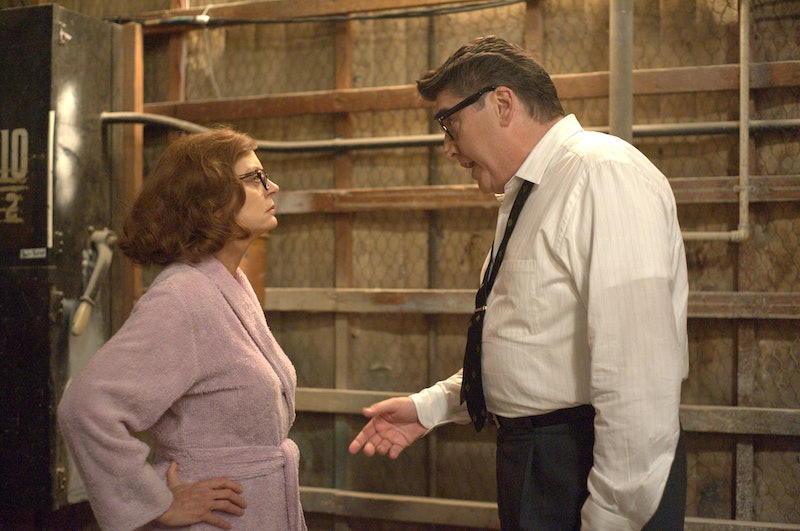 Entertainment lovers will never get over juicy Hollywood gossip and Ryan Murphy knows that full well as indicated by Feud: Bette and Joan. Perhaps that's why the second episode of Feud shows Bette Davis and Robert Aldrich sleeping together. While this seems realistic enough — and adds to the drama of the series since Feud's Joan Crawford is intimidated by the idea — did Davis and Aldrich really have an affair? This part of the making of What Ever Happened To Baby Jane? might just be a fabrication by Murphy and company.

Even with only two episodes under its belt, Feud has made it clear that Crawford had an alleged habit of sleeping with her directors and costars, something that, as The Hollywood Reporter notes, real history agrees with. Rex Reed wrote in The New York Times that Davis also reportedly had her fair share of lovers, but that either woman had actually slept with Aldrich is difficult to find. I'm not saying that Crawford hadn't tried to seduce him or that Davis didn't sleep with him, like as seen in "The Other Woman" episode, but just that there is no definitive source saying either woman did.

What is interesting to note is that multiple sources say that Davis asked Aldrich if he was sleeping with Crawford before she would agree to be in What Ever Happened Baby Jane?. Andrea Passafiume wrote for TCM that Davis had said on the subject:

"Miss Crawford was famous for developing a 'meaningful relationship' with either her male star or her director ... She felt these relationships gave her a certain power, and there is no doubt in my mind that they did. I do not know, or care, if she was the sexual athlete others have described. My guess is that she was a very skilled sexual politician."

Because of this, it's implied Davis did not want to move forward with the role of Baby Jane Hudson if Aldrich and Crawford were sleeping together. Thankfully, for film buffs, the director said even though he'd allegedly had the opportunity, he claimed he hadn't slept with Crawford — and so Davis said yes to the film. Passafiume also noted that Davis said, "As the producer-director, one of the challenges of [Aldrich's] job was to show no partiality of any kind to either of his female stars ... And he didn't."

This idea of "no partiality" was echoed by another Davis statement that creator and host of the You Must Remember This podcast, Karina Longworth, documented. As noted in Slate, Longworth confirmed that Davis wanted to make sure Aldrich and Crawford weren't having sex. According to Longworth, Davis said, "It wasn't that I cared about his private life, or hers either. That's a matter of taste. I didn't want him favoring her with more close-ups."

Davis and Aldrich worked together again after the 1962 movie in Hush… Hush, Sweet Charlotte, which was written by the same author who wrote What Ever Happened To Baby Jane? and was supposed to star Crawford too. As Longworth noted:

"Crawford was paranoid that Davis and Aldrich were sleeping together — just as Davis had been regarding Aldrich and Crawford before Baby Jane — and her suspicions that she was being given the opposite of the star treatment at Davis' request was given some credence when for some reason no one was sent to pick Crawford up from the airport when she arrived in Baton Rouge for a location shoot."

(Crawford ended up being replaced by Davis' friend Olivia de Havilland in the film due to absences from the set.)

This idea of Crawford and Davis being paranoid about one another sleeping with their director is something that Feud shows, but takes it one step further by having Crawford's fears realized. That's not officially confirmed by history, but Susan Sarandon, who plays Davis in Feud and did her fair share of research, told Los Angeles Times that these two women allegedly "slept with a lot of the same men, and directors. The studios really played them against each other in order to control them, to make sure they weren’t that powerful." So, even if Aldrich wasn't a man that these women tried to have sex with — or actually had sex with — there was still plenty enough for Crawford and Davis to Feud over.

More like this
UK Viewers Will Have To Wait To Watch The Handmaid’s Tale S5
By Maxine Harrison
Paul Mescal, Man Of Mystery
By Samantha Leach and Heather Hazzan
Mike Flanagan Teases 'The Midnight Club' In This Exclusive, Creepy Clip
By Grace Wehniainen
'The Rings Of Power' Episode 6 May Reveal Sauron’s Identity
By Grace Wehniainen
Get Even More From Bustle — Sign Up For The Newsletter