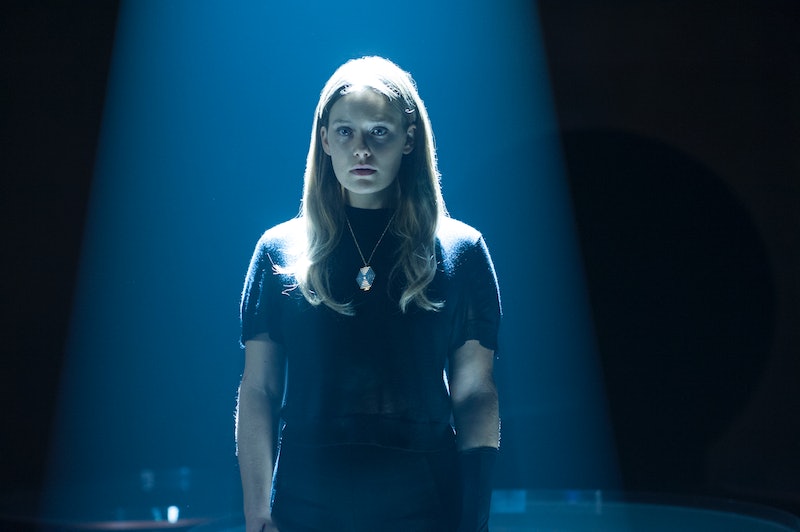 Spoilers ahead for Legion "Chapter 18." Is the future written in stone, or can it be changed? That question is a staple of science-fiction stories involving time travel, and it has now officially come into play on FX's Marvel comics series. Did Syd change the future on Legion, or is everything still playing out as it always had? That's the lingering question heading into the Season 2 finale, as Amahl Farouk has finally reunited his mind with his body, and David Haller seems to have taken a turn for the dark side.

The episode opens with the sight of David sitting on a throne surrounded by skeletons, with his minion Lenny — her mouth stained with blood — writing on the floor at his feet. Fans of the X-Men comics on which Legion is based will take particular note of David's grooming: in this scene, presumably a glimpse of the bleak future that Future Syd warned about, the character is finally sporting his signature spiked hair from the comics. (He's also referred to as "Legion" for the first time, by Melanie in the present-day timeline.)

As a Farouk-infested Melanie points out to Syd, yes, David is gifted with immense powers and was haunted by a demon for most of his life; but neither of those things is as dangerous as the simple fact that he's insane. And he does seem to enjoy torturing Oliver Bird for information a little too much. So is David's descent into villainy preordained at this point? Or can he still be saved? …And can the Shadow King still be stopped?

Farouk seems pretty unbeatable at this point, given that the penultimate episode of the season ends with the evil mutant winning the race and finally reuniting with his body. But, as is often the way with these twisty-turny sci-fi stories, could Farouk's temporary victory ironically lead to his ultimate downfall? After all, the mere fact that he reunited with his body implies that the future that Future Syd came from has been changed.

When Future Syd first visited present-David, she asked him to help Farouk reunite with his body, because Farouk would be needed in the future to help defeat an even worse villain. (Of course, she neglected to mention that this supervillain was David himself.) She told him that, in her timeline, David bashed Farouk's skull in somewhere in the desert before the Shadow King could find his corporeal form. She urged him to avoid this fatal encounter and ally himself with his nemesis instead.

Of course, the season could still end with David bashing Farouk's head in; but the fact that Farouk rejoins his body at all implies that things are changing. When Melanie shows Syd that her own future self warned of David's impending villainy, Present Syd insists that the future isn't written yet, and that they could change things and help David avoid that path.

Maybe she's right. If Future Syd's warnings really did change things, they could start a ripple effect that could lead to Farouk's defeat and David's salvation. But would that just be a temporary solution to a larger problem? There's no denying that David is unstable; even if the exact path to Future Syd's timeline is changed, there are plenty of ways that the episode's terrifying glimpse of "Legion" could still come to pass. Maybe every road eventually leads to David becoming a monster. Maybe this story has always been a tragedy, with David destined to fall into villainy.

Or maybe both things can be true. Maybe the changes in the present didn't change the future… but rather splintered off a new reality running parallel to Future Syd's timeline. Legion did recently introduce the concept of the multiverse; maybe there are now two dimensions with two different Davids, one becoming a hero and one becoming a villain. If so, will Legion end with David facing off against an evil version of himself from a parallel reality? Seems like an appropriate conclusion to a series to that's always been obsessed with the self and questions of identity and reality.