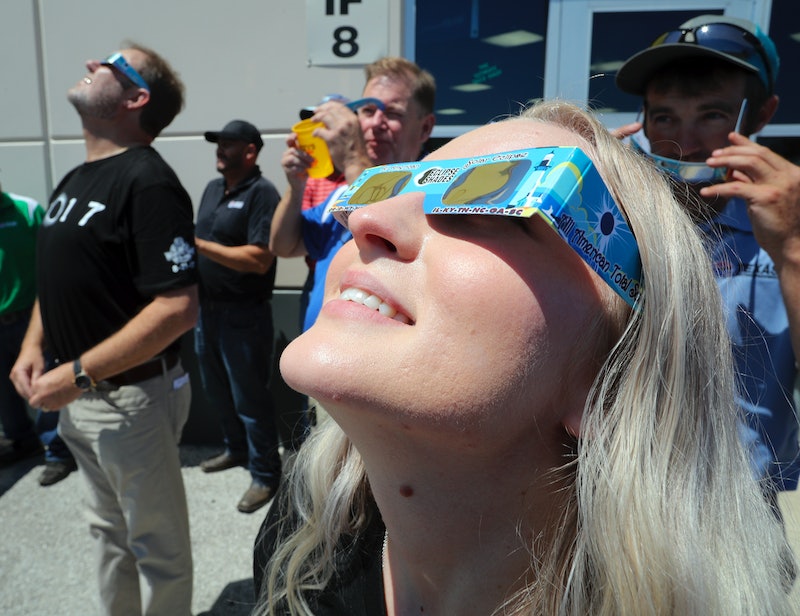 There’s been a lot of talk about the idea that the August 21 solar eclipse — which, as a reminder, happens when a new moon passes in front of the sun — could be messing with women’s periods this month. This isn’t a new thing — the idea that there's a connection between the moon and women’s menstrual cycles has been around for a long time. Back before calendars and clocks, women used the moon to keep track of where they were in their cycle. A lot of New Age spiritualists refer to a woman’s period as her “moon time.” Even the word “menstruation” comes from the Latin word “mensis,” which is related to the Greek word for moon. But a recent study of 7.5 million menstrual cycles by the female health app Clue found that there’s no actual connection between the moon cycle and each individual woman’s menstrual cycle.

"We analyzed 7.5 million cycles of Clue users and found that the start of the period is equally likely to fall on any day of the month, regardless of the lunar phase," Dr. Wheeler tells Bustle. "Given the length of the average menstrual cycle (29 days) and the lunar cycle (29.5 days), one in two women will have their period start within three days of the full or the new moon. For someone with a relatively regular cycle this may look like their cycles always start around the same lunar phase — but there will be equally many people with their period starting on any other day of the lunar cycle."

In addition to being a data scientist with Clue, Dr. Wheeler has a PhD in astrophysics from the University of Oxford and also spent three years as a postdoctoral researcher at the Leibniz Institute for Astrophysics in Potsdam, Germany. She examined data from Clue’s 1.5 million users, which included 7.5 million menstrual cycles, and found that periods started randomly throughout the month and not — as is commonly stated by people who believe that women’s cycles sync with the moon — with the new moon.

Connecting the moon and women’s cycles might not be total bunk, however. Before technology and artificial light and the millions of other things that divorce the modern human from nature, it’s not inconceivable that women did sync with the moon. Proponents of the idea point out that the moon cycle is 29.5 days, while the average menstrual cycle is 29 days. Jenn Sinrich points out in her piece in Marie Claire that both the menstrual cycle and the moon cycle have four phases: menstrual, follicular, ovulatory, and luteal and new moon, waxing moon, full moon, and waning moon.

But modern humans simply don’t interact with the moon — and with nature in general — the way we used to. We eat processed foods. We take hormones to control our reproduction. We have lights that we turn on at night so we can keep doing whatever it is we’re doing. Our diet is processed and full of scientific changes that have resulted in a very well-fed population, but undoubtedly isn’t very “natural” anymore. We’re surrounded by objects made from plastic and steel and pressure treated wood. So it’s not terribly surprising that women aren’t syncing up with the moon, if we ever were. Dr. Wheeler thinks the association is probably less science, more faith.

"I am not an expert in the anthropology of the menstrual cycle, but I can speak to this as someone with a PhD in astrophysics," Dr. Wheeler says. "Both the moon’s gravity and the light it reflects are too weak to influence physiological processes in our bodies, no matter how in touch with nature we are. Moon’s effect on tides is often what gets brought up in these conversations ('if the moon is powerful enough to cause tides on Earth, imagine what it could do to your body'). Tides occur because the gravitational pull on one side of the body is different than the pull on the other side. These differences are large enough to cause tides on the scale of the Earth, but not on the scale of a human body. What is possible is that people thought we were in sync with the moon more when we were more in touch with nature (and lived in places with less light pollution), simply because we used to notice the moon more — speaking to confirmation bias and not an actual correlation."

I love the idea of women’s menstrual cycles syncing with the moon. There’s something so lovely about picturing a universal connection between that beautiful, glowing orb and all of the women in the world. I also believe that there are certain things our bodies understand that science hasn’t yet figure out and, honestly, the moon’s effect on our bodies might be one of those things. But it’s hard to argue with the data and the data says that women’s periods start equally throughout the month, not with any moon cycle. So, sorry, that means it’s unlikely that the solar eclipse is messing with your menstrual cycle.