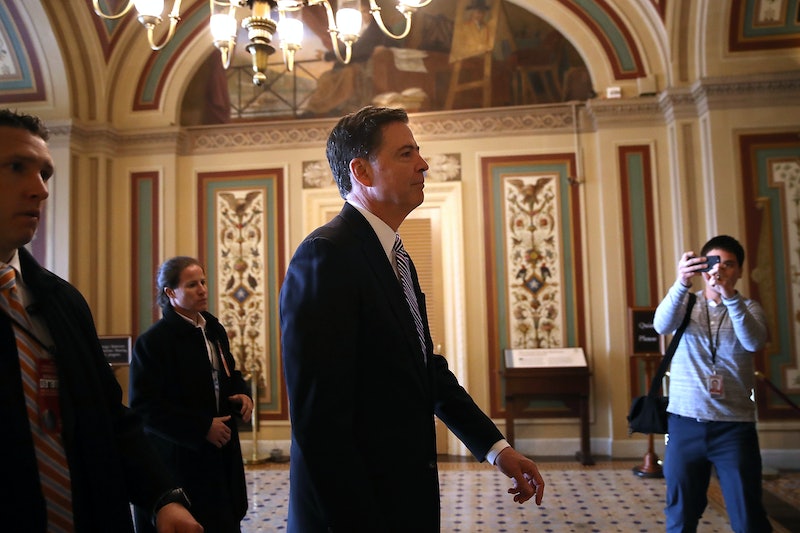 On Thursday, two former White House ethics lawyers brought up a startling point in an op-ed for USA Today regarding President Trump's decision to fire former FBI Director James Comey. Sure, the decision seemed abrupt and obviously suspicious, considering Comey was also leading the investigation into Russia's alleged interference with the 2016 presidential election. Trump has denied ties between his campaign and Russian officials, and has also claimed he had been considering firing the FBI director since day one in the Oval Office. Regardless, these ethics lawyers think that by firing Comey, Trump did worse than break the law.

To be clear, Trump did not necessarily break the law by firing Comey. As president, he retains the power to appoint and thereby dismiss the leader of the bureau. But Laurence Tribe, a professor at Harvard Law; Richard Painter, a former ethics lawyer for President George W. Bush; and Norman Eisen, a former ethics lawyer under President Obama, are well aware of that. In their nuanced article appropriately titled "Firing Comey Is Worse Than Breaking a Law," they wrote:

What the president did was worse. It was a challenge to the very premises of our system of checks and balances precisely because it violated no mere letter of the law but its essential spirit. No one, not even a president, is above the law. And thus no public official, high or petty, can simply fire those our system trusts to investigate and remedy that official’s possible bribery, treason, or other disloyalty to the nation.

So, here's where things get tricky. Though Trump firing Comey was legal, it's also possible that it was an "obstruction of justice," a punishable offense that occurs when an otherwise lawful act is wrought with corruption. The New York Times published a helpful piece by journalist Charlie Savage explaining the concept. When it comes down to it, proving that Trump's decision to fire Comey was an obstruction of justice wouldn't be an easy task.

But Trump's critics jumped on the opportunity to decry Deputy White House Press Secretary Sarah Huckabee's implication on Thursday that Comey's firing was related to the Russia investigation.

However, earlier that same day, Huckabee Sanders claimed that Comey being fired would not alter the investigation. Still, her statement, which contradicts the original claim that Comey was being fired because of the way he handled the Hillary Clinton email investigation, raises eyebrows.

As opposed to demanding that Trump be impeached for firing Comey, the authors of the USA Today op-ed stress the need for an objective special investigation into Trump's campaign and Russia. Only then will the nation really understand why Trump fired Comey and if, in fact, he had anything to hide.