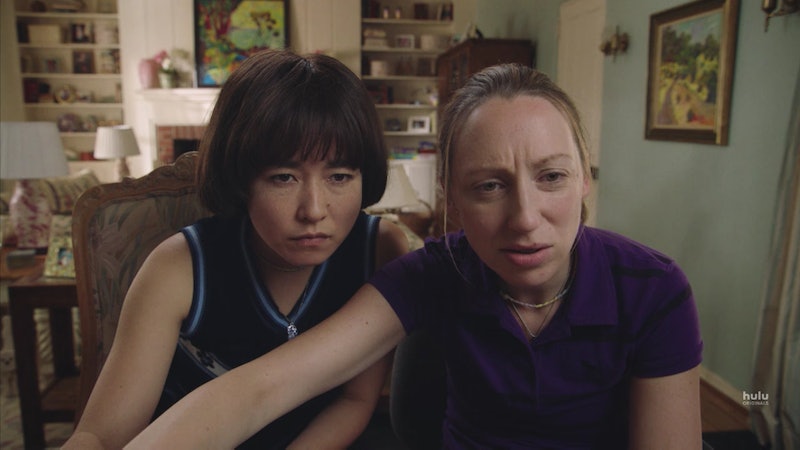 Whether you've been going on first dates over FaceTime, attending sex parties on Zoom, or exchanging explicit photos via text, digital dating during the coronavirus pandemic has been having a major moment. But it’s not its first moment — or even its second or third. Sure, better technology is now making it easier to connect with strangers than ever before. (And I honestly don’t know what I’d do if I had to go through this without high-speed wifi, which, I know, is a very first world perspective, and also very true.) But anyone who gets a little dopamine hit when they see the phrase “a/s/l” knows that online dating is in no way, shape, or form a product of being stuck in self-isolation. It's been around for a while. In fact, it's how I met my first lover.

My first introduction to the world of online dating was reading over my older sister’s shoulder while she chatted with strangers on our family's desktop. By the time I was 12, I was sneaking into those AOL chat rooms myself. By then, I’d had my period for two years, was wearing a C-cup bra, and was more than a little curious about sex. I also knew, from my sister's experience, that age, sex, and location weren't questions that people who were looking to make “friends” asked. In other words, they were all looking to "cyber."

These messages gave me a chance to explore different kinds of sex without actually having sex.

My first full-on digital relationship started in an AOL chat room and moved over to AOL Instant Messenger (AIM), with a man whose screen name was xXAnaxagorasXx. (Mine was madonnaminime.) He sent me photos of his face from when he was younger, and I sent him one overexposed polaroid of me. We didn’t send each other any explicit photos (this was before camera phones, and you had to literally scan anything you sent online), but we did talk a lot about BDSM-y things we wanted to do with each other.

In my memory, those conversations were extremely scandalous. In reality, they were probably fairly tame, at least by my 2020 standards. Regardless, those messages gave me a chance to explore different kinds of sex without actually having sex. They were a safe space for me to examine my desires and to feel desired, to figure out what turned me on, and to turn someone else on. They were integral to my development as a sexual person.

Myisha Battle, a Bay Area sex and dating coach and host of the positive sex podcast Down for Whatever, tells Bustle that conversations about what you’re into, even if you can’t do those things together, can be a great way to avoid “sexual misalignment.”

“A big part of dating is trying to find people with whom you feel safe and comfortable being your full sexual self,” Battle tells Bustle. “Even if you’re keeping relationships purely digital, there should be some amount of sexy talk and flirtation to give clues about what you value in a sexual relationship.”

I’m not the only person who’s been experimenting with full-on sexual and romantic digital relationships over the past couple of decades. Take, for example, that episode of PEN15, where Maya meets a guy on AOL Instant Messenger (AIM) called “Flymiamibro22” who she thinks is much older and who becomes her “boyfriend.” Or more than half of the relationships on 90 Day Fiancé. Or your uncle who met a woman on Match.com who he moved to Minnesota for. Or even just that one person you exchanged dirty messages with on Tinder before getting bored and blocking them. We've all been woven into a long, interconnected web of virtual relationships for years, without even knowing we're part of history.

"Online dating has been around in a variety of forms since about the mid-'90s, with Match.com starting in 1995 and celebrating its 25th anniversary this year," Dr. Nicola Fox Hamilton, Ph.D., a cyberpsychologist, tells Bustle. "However, people were meeting online before official dating sites existed, and continue to meet and form relationships outside of online dating now. Gaming, online communities, and social media are all popular meeting places."

Virtual-first and digital-only dating and relationships may feel novel right now, but we’ve practiced for this. Is this your first time dipping your toes into the “a/s/l” dating pool? If so, welcome! It’s a very weird and very fun world you’re about to enter. And the possibilities are, quite literally, infinite.