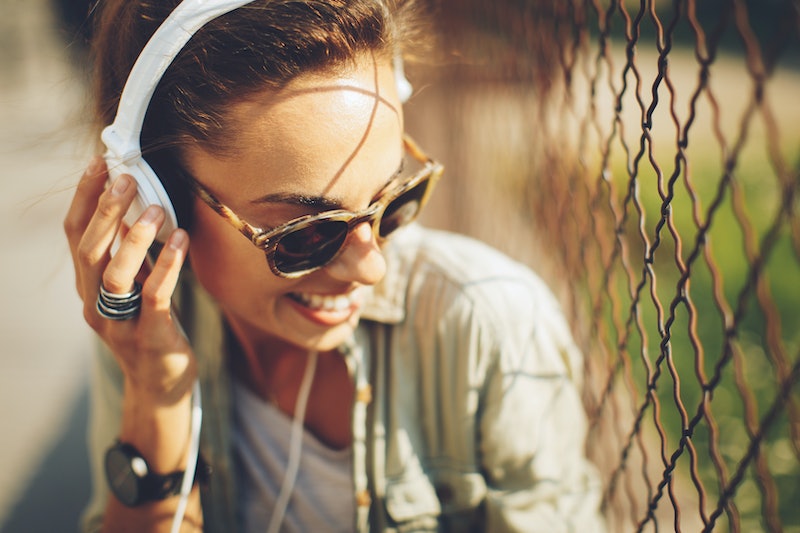 Disney has been changing our lives since we were old enough to watch movies, and for nearly a century, they've taken us on countless adventures through magical places and unforgettable fairytales, and shown us what it means to believe in magic. Now, they're making moves to keep up with their millennial fans. Hey, even the most famous animation company has to evolve. In an effort to appeal to an audience that's growing up, Disney is launching podcasts to its consumers, WWD reports — plus a bunch of other cool surprises.

The announcement came at the annual NewFront presentation in Manhattan's West Village, says WWD. With millennials and Gen Zers making up over 70 percent of Disney's audience, it makes sense the brand is looking to appeal to an older age group. Thus, through Disney Digital Network, the company plans to release at least one podcast a year. This year, it'll be "Disney Backstage," which looks at stories behind the production of movies like The Lion King.

They're not stopping there, though — it gets even better. Disney is also teaming up with Tastemade, a video network centered around cooking and travel, for Disney-themed cooking shows geared toward millennials. According to CNBC, this new programming will be called Disney Eats, and it will feature cooking shows and products for families.

Some of these shows, says CNBC, include "Kitchen Little," where kids work side-by-side with famous chefs, and "Tiny Kitchen," where chefs will create tiny replicas of Disney food. The goal is to help bring adults and children together in the kitchen. Plus, they'll have tons of branded products, like bakeware and even cookbooks. Disney spatulas and whisks? Take my money! While we typically think of cheeseburger pizza and rose gold churros when it comes to Disney food, these shows won't be like that. Just like Disney once demanded of its own advertisers, their culinary creations will meet certain nutritional standards.

On top of the podcasts and cooking shows, you can add a relaunch of Disney's mobile app, plus new programming for Facebook Watch. The brand is getting a major facelift.

These changes might not sound anything like the Disney flicks we grew up with, but I don't think they're supposed to. The goal doesn't seem to be to appeal to today's children; it's to stay in touch with a crowd of adults who grew up with Disney, and also to help bridge the gap between them and today's kids. Don't worry, though: the Disney films and characters we grew up with aren't going anywhere, and you can still expect them to continue creating amazing animated films.

From a business standpoint, Disney is making a seriously profitable call — although that comes as no surprise. The podcast industry specifically has been skyrocketing over the last few years. According to research by the Interactive Advertising Bureau and PwC, shared in Backyard Media, podcast advertising revenue in 2016 totaled about $119 million, and they projected 2017 to hit $220 million. Not only is the podcast industry making more money, but its rate of growth has been increasing. 2015 to 2016 saw a 72 percent increase, while 2016 to 2017 demonstrated an 85 percent increase.

Perhaps it's the ease of access and convenience of podcasts, the variety, and the price tag that would explain why so many of us love them. Podcast Insights reveals just how many of us have listened to podcasts: 44 percent of the U.S. population! As of this month, Fast Company shares, Apple has more than 525,000 shows and over 18.5 million episodes available — and these numbers are rapidly growing. Who wouldn't want a piece of that pie?

Keep your eyes peeled for tons of new Disney excitement, millennials. They're coming for you.

More like this
Kim Cattrall Had A 'Sex And The City' Reunion With Creator Darren Star
By Grace Wehniainen
Shania Twain Replaced Brad Pitt’s Name In “That Don’t Impress Me Much” At The PCAs
By Jake Viswanath
17 Photos Of The 'Wednesday' Cast Vs. The 1991 'Addams Family' Cast
By Grace Wehniainen
The 'Kenan & Kel' Reunion On 'SNL' Took A Dramatic Turn, Thanks To Keke Palmer
By Brad Witter
Get Even More From Bustle — Sign Up For The Newsletter