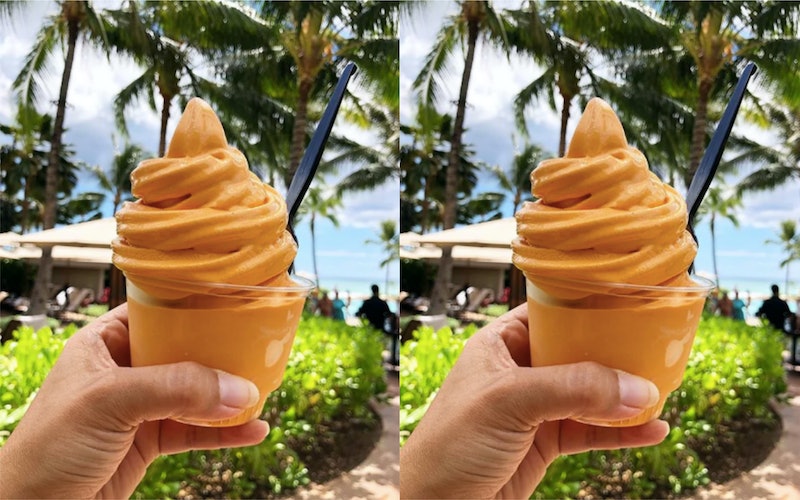 As hard as it is to believe, not every part of the country gets colder in the fall. Lifelong east coast residents like myself look forward to the season in part because of crisp air and ample hoodie-wearing opportunities. But, some areas never truly stray from the weather the rest of us associate with summer. Coincidentally, the so-called happiest place on earth has a location in one of these regions. Naturally, Disney has not struggled to come up with a way to embrace fall food in the heat. At a Disney resort in Hawaii, you can enjoy pumpkin soft serve ice cream — dubbed "pumpkin spice Dole Whip" — during the fall.

The average high temperature in Ko Olina, Hawaii, where Disney’s Aulani Resort and Spa is located, is 84 degrees in October. Rarely does it dip below the high 60s, so sweater weather is not really a thing. But, before you think that negates possible fall festivities to be had, trust that Disney has it covered. Hot apple cider might not provide the same comfort in warm weather as it does in the cold, but when it’s warm out, you can treat yourself to something objectively better.

According to Instagram users PBandJellyJen and iheartdisneyland, you can find the pumpkin soft serve at the Ulu Cafe on the resort. But, it is not readily advertised. PBandJellyJen writes that it is not listed on the menu, but that she asked an employee about it. For a spectacularly spooky sweet, you can even get it topped with candy corn.

Whether or not this is the only pumpkin product available at the Aulani Resort and Spa is unclear, but the abundance of pumpkin treats at other Disney theme park locations should also be noted.

Topping the list of unconventional pumpkin treats has to be cotton candy. It may be standard theme park fare, but did you know you can get some that tastes like pumpkin? Since it is Disney, of course it isn’t just any old cotton candy gracing menus. For $8 at Cotton Candy Creations in Downtown Disney, guests can snag a massive Jack Skellington pumpkin-shaped cotton candy. After reaching out to Disney, Bustle also confirmed you can get a white, vanilla-flavored Jack Skellington Cotton Candy.

Both utilize cookie dust to create Jack’s face, and both come served on a stick — perfect for transporting and Instagramming, alike.

An unexpected treat you can also find at Disney this Halloween season is pumpkin spice churros, which are deep fried and served hot with cream cheese dipping sauce. The Disney Parks Blog reports you can find churros at three specific locations throughout the park: at the churro cart near the Haunted Mansion in New Orleans Square; at Willie’s Churros on Buena Vista Street; and at the Cozy Cone Motel in Cars Land.

Wherever your Halloween plans take you, you can count on Disney to have a perfect treat for your travels. But, there is something to be said about enjoying the spookiest day of the year poolside with some ice cream in hand.