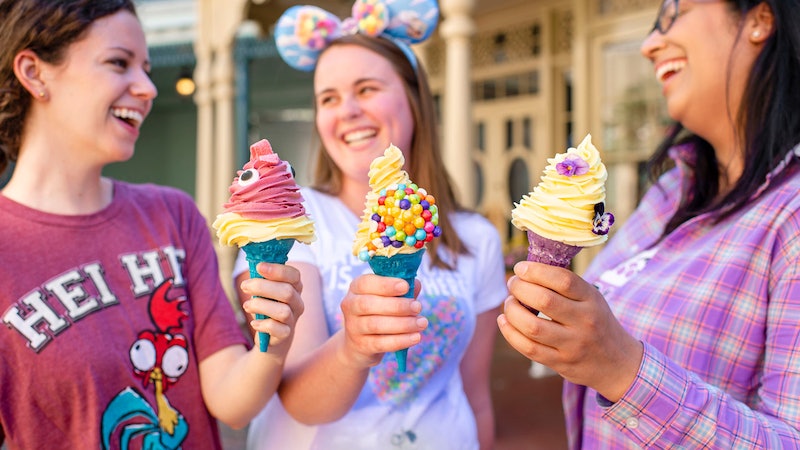 It seems like every couple of weeks, we hear about new treats and eats making their debuts at the Disney parks — and you know what? I’m not even mad about it. I could read about whimsically-themed food items all day and never get bored. That is why I am very much here for the new themed ice cream cones Disney World just launched at the Magic Kingdom: They’re beautiful; they’re probably delicious, and one of them even looks like Hei Hei from Moana.

I can’t explain why, exactly, but the idea of an ice cream cone shaped like an exceedingly stupid rooster just… really does it for me.

The Disney parks have been really going to town with their cupcakes in recent years (see: Mermaid Cupcakes, Unicorn Cupcakes, etc.), but we’ve seen comparatively fewer frozen treats get plussed up in quite the same way. In some ways, that’s understandable; ice cream and soft serve are a lot harder to work with than cake and frosting due to the fact that they, y’know, melt. But it’s a nice change of pace to see some themed cones emerge from the House of the Mouse — and these ones are particularly fantastical.

Themed after Moana, Tangled, and Up, the three cones each bear their own distinctive names and appearances: The Hei Hei cone recreates Hei Hei the rooster in frozen form; the Lost Princess cone takes is cues from Rapunzel; and the Adventure Is Out There cone look to Carl Fredricksen’s fanciful flying house for inspiration. Each is available at a different spot in the Magic Kingdom, although they all cost the same ($5.29 apiece), and they all hit the scene on Feb. 24.

Here are the details on the new cones and where to find them: