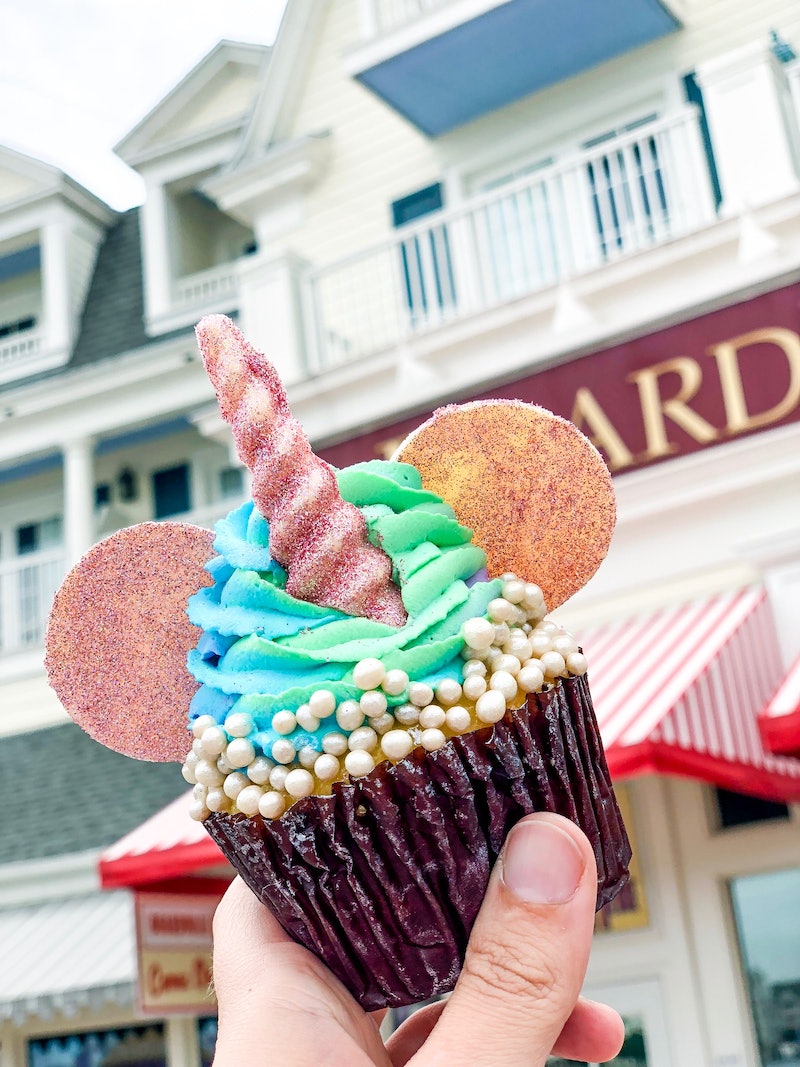 The Walt Disney World Resort in Orlando, Fla. has certainly been stepping up its dessert game lately, releasing wave after wave of fanciful cupcakes decorated with everything from chocolate mouse ears to edible glitter — but this Unicorn Mickey Cupcake from Disney World’s BoardWalk Bakery might just be the most spectacular offering yet. The newest kid on the sparkly, unicorn-populated block puts a magical twist on an already-beloved classic — the Mickey ear cupcake — and, well… I think it’s safe to say that dessert will never be the same again.

Located at Disney’s BoardWalk — which, by the way, gets my vote for the completely made-up prize of Most Entertaining Disney World Resort Hotel — the BoardWalk Bakery actually underwent extensive renovations in 2013; it was so popular that its original location needed to be doubled in size to accommodate the crowds. Both before and after the renovations, it’s been a popular spot for breakfast, boasting options like an egg and cheese breakfast sandwich served on a croissant and some pretty incredible-looking muffins — but what it’s really know for is its eye-catching assortment of pastries. The cupcakes in particular literally take the cake.

And this cupcake really pulls out all the stops:

The Unicorn Mickey Cupcake comes complete not just with a unicorn horn, but also with its own set of Mickey ears. According to Intagrammer @brbgoingtodisney, who also blogs at brbgoingtodisney.com, the cake itself is lemon and has been topped with whipped frosting tinted to look like a colorful, tie-dyed swirl. Inside is a raspberry filling (which one Twitter user actually described not just as raspberry cream, but as “wild berry lemonade mousse” — color me intrigued); the ears and horn are made of white chocolate; and lastly, the whole thing has been dusted with edible pink glitter to lend it a little extra magic.

The specialty cupcakes served at the BoardWalk Bakery, as well as throughout Disney's various parks and properties, aren’t exactly cheap; they’re typically around $5.99 a pop, which both the BoardWalk Bakery menu and @brbdoingtodisney confirm is the case for the Unicorn Mickey Cupcake. But, I mean… just look at that thing:

Worth it? I would say so. If you have a Disney Dining Plan, you can also use one snack credit to grab one of these treats, according to @brbgoingtodisney.

But although the BoardWalk Bakery’s offering is the latest treat adorned with a unicorn horn to grace Disney World’s expansive menu, it’s far from the only one available. For example, when Disney unleashed a selection of desserts designed to fit in with the ubiquitous rose gold trend in February, a Rose Gold Unicorn Cupcake arrived at the Victorian-theme Grand Floridian Resort & Spa’s quick-service restaurant, the Gasparilla Island Grill:

According to the Disney Parks Blog, this treat consists of “rose gold sponge” (I don’t really know what flavor “rose gold” is, but I’m willing to roll with it) stuffed with a hazelnut cream cheese filling. It may not have Mickey ears, but it does have an adorable little pair of unicorn ears to go along with its horn.

During Pride Month this year, the Main Street Bakery — located (where else?) in the Magic Kingdom’s Main Street, U.S.A. land — also put a unicorn cupcake on the menu; this one, however, was a Rainbow Unicorn Cupcake.

Blog Mickey’s review noted that the cake was admittedly “standard tasting”; however, the appeal was in the presentation: The cake itself was “infused with rainbow sprinkles” (which I’m taking to mean that it was essentially Funfetti cake) — and the whole treat was filled with rainbow and Mickey-shaped sprinkles. When you cracked open the thing, the sprinkles spilled out like the cupcake was a piñata. The unicorn’s horn, of course, was rainbow-striped.

A Strawberry Lemonade Unicorn Cupcake also arrived on the scene at the All-Star Music Resort back in March:

Like the Pride Month offering at the Main Street Bakery, this earlier incarnation was filled with rainbow sprinkles, according to Chip & Co. The horn, however, wasn’t made of chocolate; it was a wafer cookie (or maybe an ice cream cone. Same difference, right?).

And if you’re willing to venture beyond Disney World and over to, say, the Disneyland Resort in Anaheim, California, you can get an Iridescent Cupcake at Jolly Holiday Bakery Café at Disneyland Park, both Clarabelle’s Hand Scooped Ice Cream and Fiddler, Fifer, and Practical Café at California Adventure, and the Coffee House at the Disneyland Hotel:

For what it’s worth, this particular treat sounds like the most interesting of all the unicorn cupcakes available at Disney parks; Disney Parks Blog notes that the cake is passion fruit-flavored, the filling is passion fruit and mango, and the topping is white chocolate Champagne mousse.

And, hey, if unicorns aren’t your thing, you can also get a Mermaid Cupcake at Disneyland now, too. Just sayin'.

One thing’s for sure: At the Most Magical Place On Earth, there’s no shortage of equally magical desserts. If you happen to be either at Disney World this very minute or located in the Orlando area, head to the BoardWalk Bakery to grab your very own Unicorn Mickey Cupcake. Go on. Do it for the ‘gram — and for your sweet tooth. Heck, and yes.