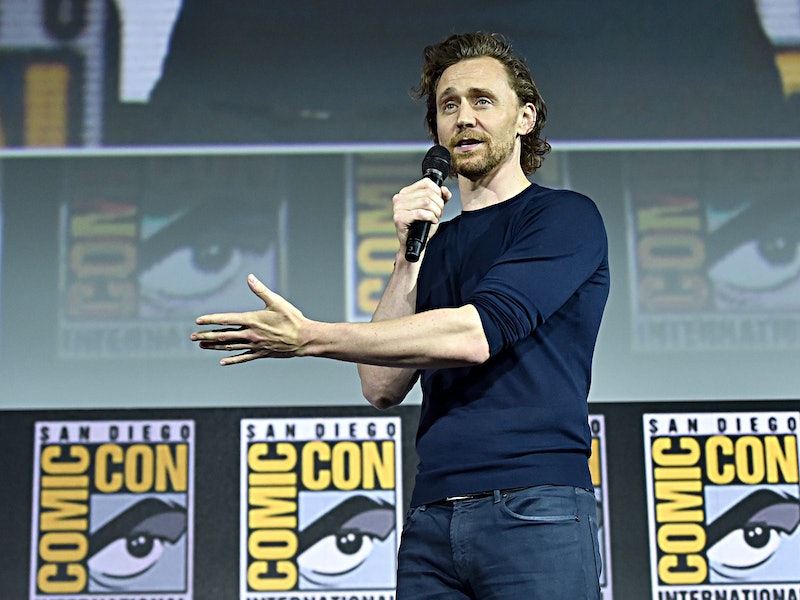 Comic-Con continued to double as Christmas morning for Marvel fans on Saturday, July 20 when Marvel Studios unveiled its Phase 4 plans. There were several high-profile movies announced (Natalie Portman as a female Thor? Black Widow solo project finally confirmed!), but even more surprising was just how much quality content fans can expect on the Disney+ streaming platform. Disney+'s Marvel TV shows were announced and all five (!!) will utilize some of your favorite MCU stars and characters.

Not only was it a big moment for MCU loyalists, who can expect series The Falcon and the Winter Soldier, WandaVision, Hawkeye, Loki, and What If...?, in 2020 and 2021, but it also marked the official arrival of Disney+'s prominence as a streamer. In April, it was revealed that Disney+ would launch November 12, 2019 and be home to a hefty collection of Disney-inspired content, including the five Marvel shows confirmed at Comic-Con on Saturday.

At the time, details on which actors would be returning as their superhero personas were limited. But with the onstage presence of many of the MCU performers, more cred was given to shelling out $6.99 monthly for a subscription. The Comic-Con announcement also carries extra meaning in the aftermath of Avengers: Endgame, when audiences are anxiously awaiting the returns of their coveted Avengers.

The Falcon and the Winter Soldier

Now this is a buddy team-up series to look forward to. Marvel Studios President Kevin Feige confirmed Anthony Mackie (Sam Wilson/The Falcon) and Sebastian Stan (Bucky Barnes/The Winter Soldier) would be returning to their Captain America-adjacent roles. Both actors appeared onstage, hyping the crowd for a series where the two will "fight together against evil" in the wake of Endgame. Also on hand to fill a villainous void? Daniel Brühl's Baron Zemo, seen in Captain America: Civil War.

This original series will see star-crossed superheroes Vision and Wanda Maximoff/Scarlet Witch together again. Although there is no word on just how the show will work following the Endgame tragedy for the pair, actors Paul Bettany and Elizabeth Olsen will both star in the show. And they'll be joined by MCU newbie Teyonah Parris, who will play a grown-up Monica Rambeau. That character made her onscreen debut in Captain Marvel.

Jeremy Renner is returning to his bow-wielding onscreen role and welcoming a new character to the fold. Well-known comics presence Kate Bishop will reportedly be "an integral part of the series." The Verge previously said that Renner's Clint Barton will hand the role off to his protégé in Bishop.

Fan-favorite villain Loki is triumphantly returning to the screen in this titular original series. Tom Hiddleston celebrated the new project alongside the audience, hinting that his character got his hands on the Infinity Stone and cheated death, making it possible for him to re-emerge unscathed, per The A.V. Club.

Perhaps the series most shrouded in mystery — until now — was the MCU's first animated series, What If...?, which will appeal to the conspiracy theorist in everyone. Feige teased that the show will "present alternate realities in the Marvel universe" and utilize familiar faces from the MCU. Jeffrey Wright was announced as The Watcher, a comic book fave, but a whole lot of Marvel veterans will be reprising their roles for the animated series.

The appetite for MCU favorites is seemingly endless, making this latest slate of Disney+ Marvel shows a meal worth savoring.