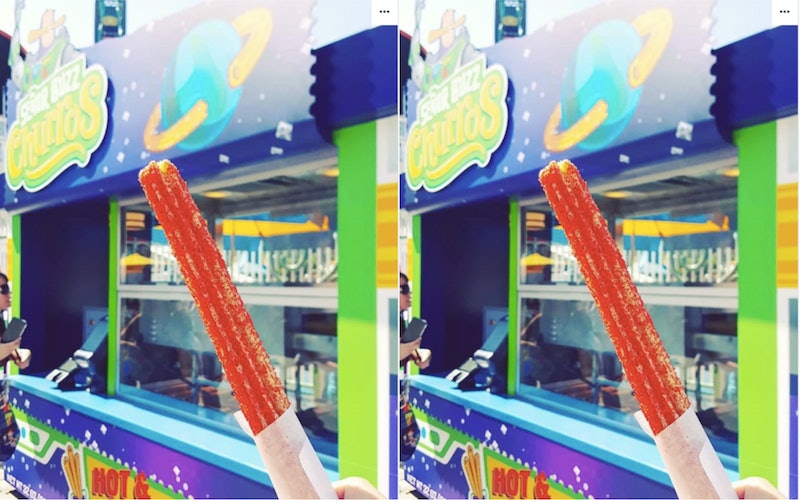 I love Disneyland for many reasons — the rides, the characters, the gorgeous castle (channeling my inner Cinderella, obv.), and of course, the array of food to much on and drinks to slurp up in between rides. Speaking of drool-worthy bites, the company just launched their most adventurous and bold snack to date: the spicy Caliente Churro at Disneyland, available at the new Pixar Pier.

The savory treat can be found at the Señor Buzz Churros stand, which boasts everything from classic churros to more flavorful ones such as cinnamon sugar galaxy. The fiery spicy caliente edition allegedly tastes like it was "dipped in a vat of Cinnamon Red Hots," according to Topher Wallace, a writer for WDW News Today. Jenny Flake of the @disneyhungry Instagram account also says it "tastes like sweet and spicy Red Hots," which means it's brand must be pretty strong. Although I haven't tried it in person yet, my body is already craving the spicy-sweet combo and I'm willing to risk dirty, bright-orange hands to chow down on this ultimate snack. Alongside the spicy Caliente Churro, also has a Cinnamon Sugar Galaxy Churro for people more interested in traditional churro fare, according to PopSugar.

And just in case you needed anymore reason to be obsessed with it, the Instagrams that have come out of the park in the few days since its launch are truly mouthwatering.

The Cinnamon Sugar Galaxy Churro has been popping up on Insta, too — multicolored sprinkles and all.

Even if you're not a churro fan, Pixar Pier still has lots more to offer for even the pickiest of eaters. The newest Disney showcase opened on June 23 as part of the renovation of Paradise Pier. It's also an extension of the park's Pixar Fest, which runs all summer long through September 3.

Pixar Pier is the new home of lots of new yummy desserts and magical concoctions like Dory-themed candy apples.These brand-new treats are (no surprise here) Instagrammable as heck and will leave your wanting to eat everything in site (no shame, though!). If you're a foodie at heart like me and want to eat your way through Pixar Fest, there's even a food bucket list you can follow and check off as you make your way through the park, which includes everything from a pork chop TV dinner to green pesto pasta, so eat up!

Now going back to the churro deliciousness: the spicy Caliente flavor isn't the first of its kind. Disneyland has been known for whipping up some other colorful and flavorful varieties in the past, such as the beloved rose gold themed churro or the Lots-o-Straw-“Beary” one.

Back in the fall, the theme park offered guests delicious pumpkin churros as well as holiday-themed peppermint candy cane churros in December... so this definitely isn't Disneyland's first rodeo at experimenting with new and eccentric churro flavors.

The popular flavors even became an Internet trend, with park-goers lining up at churro stands around the grounds to try the Churro Challenge, whether it's scarfing down a carrot-cake flavored churro or oogling at the genius lightsaber-themed one. Other flavors include lemon, cocoa, and "donut-iced." Once you sample all of the flavors, show off your newest (and TBH most important) life achievement with a signature button on your Mickey Mouse tee shirt.

If you're looking to pair your churro with something more filling, check out more of the newest Disney restaurants and food offerings at the California Adventure Park. Head to Poultry Palace for a box of chicken drumsticks, or Lamplight Lounge for some California-inspired pub cuisine. My current fave is the crispy piggy wings. If you're looking for more spice to go with your spicy churro, stop by The Cozy Cone Hotel for the habanero meatball cone (!) which will leave your mouth watering. But before you go, make your way back to Pixar Pier and wash down your spicy meal with the one and only signature Pixar Pier Parfait made with refreshing lemon soft serve and sweet blue raspberry swirl.

And even if you're still craving churros after all of those other food and snacks, there's even more churro flavors you can try. BRB, petitioning to rename Disneyland the Land of the Churros, STAT.