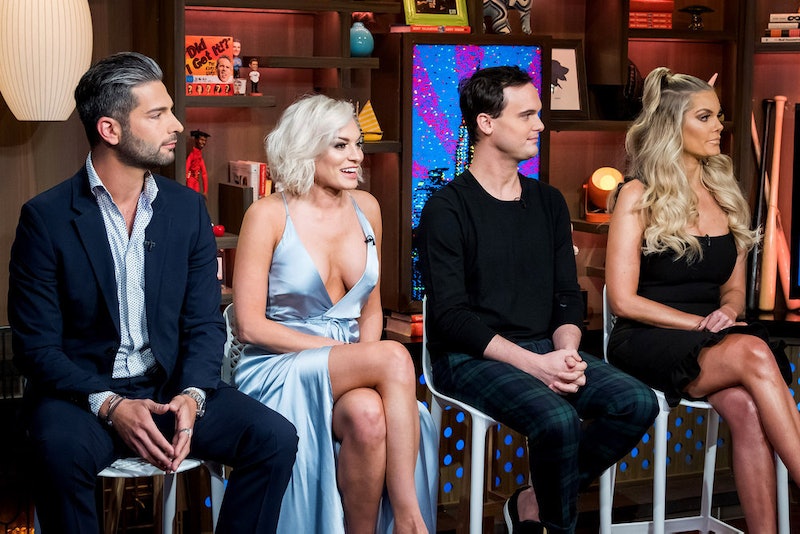 Although Kyle and Amanda have broken the cardinal "no couples in the house" rule on Summer House, the rest of the crew on Bravo's Hamptons reality show is decidedly single — that is, until Lindsay's ex (and former cast member) Everett came back for a little action with his former girlfriend. Let's call it a trip down memory lane! While we've all been there, inquiring minds want to know — are Lindsay and Everett together again after Summer House? Did these two summer lovebirds rekindle that old flame? Well... not exactly.

Lindsay and Everett started as a summer thing back in Season 1, and they fought a lot. Like a lot, a lot. They got it together, though, in time to move in together and film some of Season 2 of Summer House as a couple. Season 3 of Summer House finds Everett back again, even though he's not an official cast member — Lindsay bring him in for a little rest and relaxation, which is totally fine. Everyone has that one ex that they can't shake, and for Lindsay, it seems to be Everett. Hey, love is complicated.

Right now, though, it is not so complicated for Lindsay and Everett — they are definitely not together.

Like, at all. In an interview with Entertainment Tonight, Lindsay explained that their cycle had finally come to an end. She said:

“So Everett and I, we broke up, and then in the fall/winter after last summer, we got back together and it was a bit rocky. And then, just like clockwork, last March/April we broke up again and I thought that was pretty much for good. I mean just like, it's time for me, that this guy is just not ready for the type of relationship that I need and want, and it's time to move on, you know?”

Lindsay went on to say that completing separating your feelings "takes time" and that when she and Everett are both in the Hamptons, it's "comfortable" to be together. Right now, Lindsay said, she's dating a guy named "Johnny" that she won't elaborate much on, but at least she seems happy.

And who really needs a man in the Summer House mansion when you have all these wonderful new cast members? Paige, Jordan, and Hannah are definitely bringing a new flavor to this old friend group, something which Lindsay was hesitant about.

"I was really torn going into the summer with three new people," she told AOL. "Hannah and I have known each other out and about in the city and I didn't know Paige or Jordan. We had a lot of fun this summer, even in the first weekend. You'll really see that this season... the drama is a little bit different. It's more about drama of friendship, as opposed to half of the house separated from the other half of the house and fighting about that."

After the disastrous Season 2 reunion, fans are definitely ready for new drama. Luckily, it won't be between Lindsay and Everett — that ship has sailed.