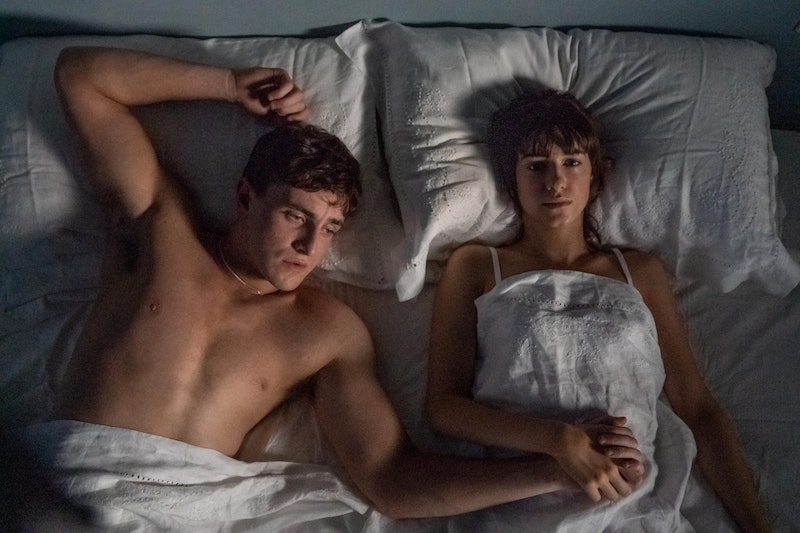 Spoilers ahead for the Season 1 ending of Normal People. The last few pages of Sally Rooney's Normal People are adapted for the new Hulu series with unwavering faith to the original dialogue. Marianne and Connell, who have spent the last four years dipping in and out of each other's lives, are discussing what comes next for their relationship. So far they've seen each other through sixth form and at university in Dublin. Marianne is committed to staying in Ireland, but for Connell, there's the offer of a one-year writing course in New York City. "You should go," Marianne tells him. "I'd miss you too much. I'd be sick," is his pained reply. The conversation is frank and spare, but stripped of Rooney’s narration seems even more open-ended than in the novel. They've been so connected in so many different ways, what does it mean for them to be apart?

"Oh, it's so hard," Daisy Edgar-Jones, who plays Marianne in the Hulu/BBC adaptation, tells Bustle. "[The ending is] a real testament to how in love they really are, that they're able to do the thing that's most painful and part." Marianne doesn't beg Connell to stay with her, but encourages him toward the opportunities his talent has won him. "Marianne feels that she can give that to Connell."

What the show's script can't duplicate is Rooney's description of the pair at the very moment they contemplate separating. "All these years they've been like two little plants sharing the same plot of soil, growing around one another, contorting to make room, taking certain unlikely positions," she writes, and in this analogy there's a kind of promise. There's only so much distance people can put between themselves and their roots. Marianne and Connell are so tightly bound that Paul Mescal, who plays Connell, can't bring himself to question it.

"I can't cope with the idea of them not being together. I'm not entertaining that possibility," he says. "In the back of my head I know there is a world in which they aren't together, but that's not a world in which I want to live. So they are together, they are happily married, and they have like 42 children, all of whom are incredibly bright.”

But the television series, like the novel, respects what Marianne and Connell have already done for each other without much mind to what comes next. They may be talented young people on the cusps of their adult lives, but they've already altered each other's trajectories. "I can imagine they reunite and have loads of children," agrees Edgar-Jones, before backtracking, taking a moment to appreciate the rich history between the two. "But also if they don't, I think what's amazing is that they've given each other the ability to be their best selves. And I think that's beautiful enough."