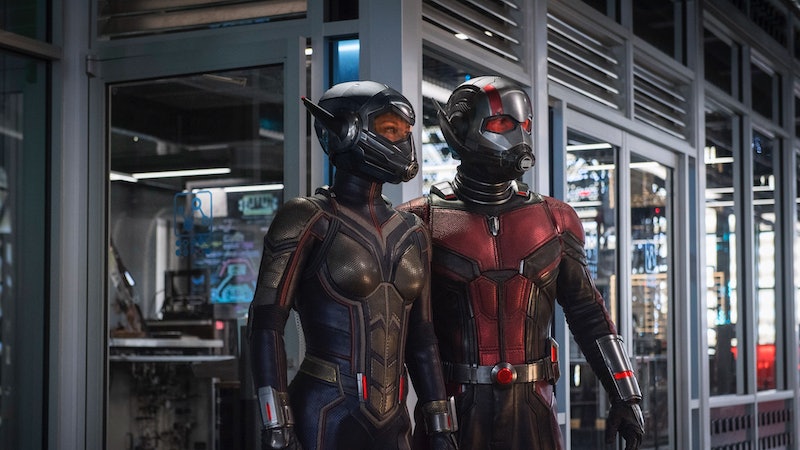 There are 21 movies in the Marvel Cinematic Universe, and Avengers: Endgame, which opens in theaters on April 26, will make it 22. But don't feel bad if you're not all caught up in time; 21 movies is a lot to get through. When it comes to preparing for the Endgame premiere, naturally, there are some preceding films that are more important than others. Obviously Infinity War is essential viewing, and the other Avengers movies that include the whole gang are important, too. But what about the others — especially the more recent? You should, for example, see Ant-Man and the Wasp before Endgame.

Although Ant-Man and the Wasp is one of the more standalone movies in the MCU, what happens in it, and particularly what happens in the closing credits scene, could be key to understanding what might possibly happen in Avengers: Endgame. Both of the Ant-Man movies deal with a space called the Quantum Realm, a sub-atomic level of reality in which time and space no longer follow known rules. And the Quantum Realm might just be the key to defeating Thanos. So, yes, Ant-Man in the Wasp is definitely important, but if you just don't have the time, here's what you absolutely need to know. Spoilers ahead for Ant-Man and the Wasp.

Most of the plot in Ant-Man and the Wasp revolves around rescuing Janet van Dyne (Michelle Pfeiffer) from the Quantum Realm, where she was lost 30 years prior. Janet, who is Hank's (Michael Douglas) wife and Hope's (Evangeline Lily) mother, was sucked into a sub-atomic space and time so small that it was thought impossible to get her out.

But the events of the first Ant-Man movie led to Scott (Paul Rudd) discovering that he could not only escape the Quantum Realm, but they actually use the Quantum Realm in Ant-Man and the Wasp to obtain a new form of energy. It's during the movie's post-credits scene when the team is harvesting that energy when something possibly really important to Endgame takes place.

As the post-credits scene of Ant-Man and the Wasp shows, Scott is inside the Quantum Realm, collecting energy for their new experiments and to keep Ghost alive. Suddenly, Scott's audio cuts out, and the movie cuts back to the roof where Janet, Hank, and Hope were standing. But instead of the three family members, all we see is swirling dust. Thanos's snap from the end of Avengers: Infinity War took all three of them, with Scott stuck in the Quantum Realm and no way to get out.

Now, this isn't the first time that Scott's been stuck in the Quantum Realm, so he knows how to get free. And since he makes a rather humorous appearance in one of the early trailers for Endgame, we know he does get out, but what we don't know is what this means for the events of Endgame.

Ant-Man and his ability to access the Quantum Realm might come in handy for the remaining Avengers who are trying to figure out how exactly they can get their family and friends back. It's not clear if Scott was just one of the 50% of the population that survived the snap, or if the Quantum Realm protected him, somehow. But since the Quantum Realm deals with a time and space where few rules apply, it's probably true that the Avengers are going to utilize the Realm to travel through time, or at least, manipulate it, into undoing Thanos's snap.

The Endgame time travel theory is also supported by the assumption that the movie is going to revisit the Battle of New York from the first Avengers, and the recasting of Scott's daughter Cassie with an older actor, suggesting a jump in time. Black Widow's hair color in the trailers also offers a big hint at a time jump. And then there's the idea that Captain Marvel, who has been known to travel through the Quantum Realm in the comics and also live in space without aging, might offer some additional ideas as to how they can use it to their advantage.

So with the high probability that Endgame is going to utilize the Quantum Realm, Ant-Man and the Wasp should definitely be on your radar as the new movie approaches.