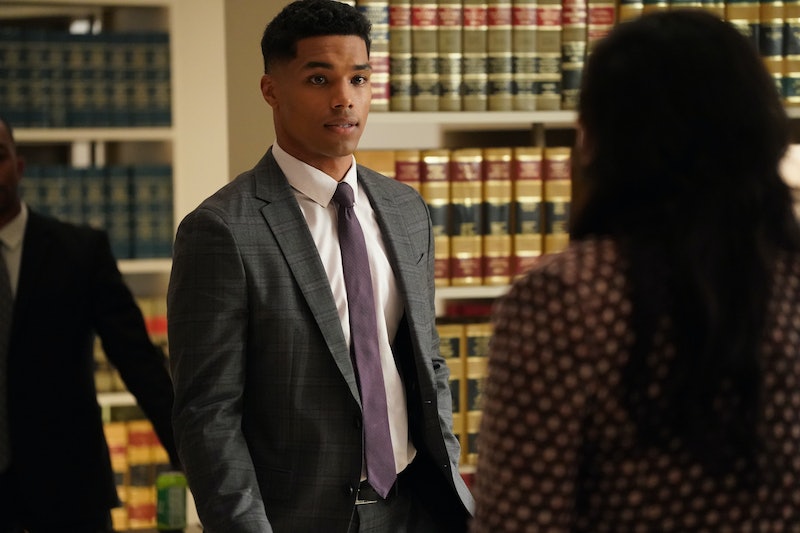 Gabriel came into HTGAWM under suspicious circumstances, given that he’s Sam Keating’s son with Vivian, Sam’s ex-wife. Vivian is now in town, watching the Keating 4, talking to Annalise, and also probably informing on everyone to the FBI — she has drug charges that the FBI is squashing in exchange, it seems, for her testimony. According to the flash-forwards at the end of every episode so far, viewers know that the dead person in question is the FBI informant. Fans also know that just because Annalise’s funeral was shown at the beginning of the season doesn’t mean Annalise actually dies — this show loves a good fake out.

Which is why it's possible that someone else, like Gabriel, dies this season.

It’s not a stretch for Gabriel to want revenge on Annalise and anyone who associates with her. Annalise was the woman who took Gabriel’s father away from him. There’s motive for him to want to punish Annalise — because he could have maybe had a different life if Sam had stuck around. Sam had tapes of his recordings with patients, and because Annalise was a patient of Sam’s, Gabriel has a lot more insight into his father’s courtship with her than he would otherwise. It turns out that Annalise pursued Sam more than vice versa, and thus, Gabriel could point-blank blame Annalise for the demise of his parent’s marriage.

But why would he be trying to take down and inform on the rest of the Keating 4? Michaela, Asher, Connor, Laurel, and the dearly departed Wes all played a part in Sam’s death. They killed him (in self-defense, but still) and then tampered with and disposed of his body. If Gabriel showed up to Middleton wanting to get to know his father and then realized how and why his dad died, he could feel robbed of the chance to know Sam.

For the record, Flynn told TV Guide he would think the Keating 4 would be “intimidated” by Gabriel given their knowledge of the above, and maybe they are. They’re certainly not 100% trusting of him yet. “I think that anyone that’s gonna try to come in and be involved with the Keating 5 or the Keating 4, it’s going to be an issue because they’re really close,” Flynn said in a 2018 interview with Bustle. For all of these reasons, it's possible that Gabriel is talking to the feds, or at least trying to dismantle the bond between Annalise and the Keating 4.

It’s a massive betrayal, and we’ve seen what the Keating 4 and Annalise have done to treasonous friends before. They get murdered. Gabriel is full of himself and hard to pin down, making him hard to root for, but Flynn promises that we’ll see a softer side of Gabriel by the end of Season 6. “We do venture into who he is maybe a little bit more and who his mom is to him a little bit more,” he told TV Guide. “I can't give you too much information on what their relationship is like but he's obviously searching, and he's searching for a reason.”

Unfortunately for Gabriel, that reason is the thing that may get him killed by the finale.