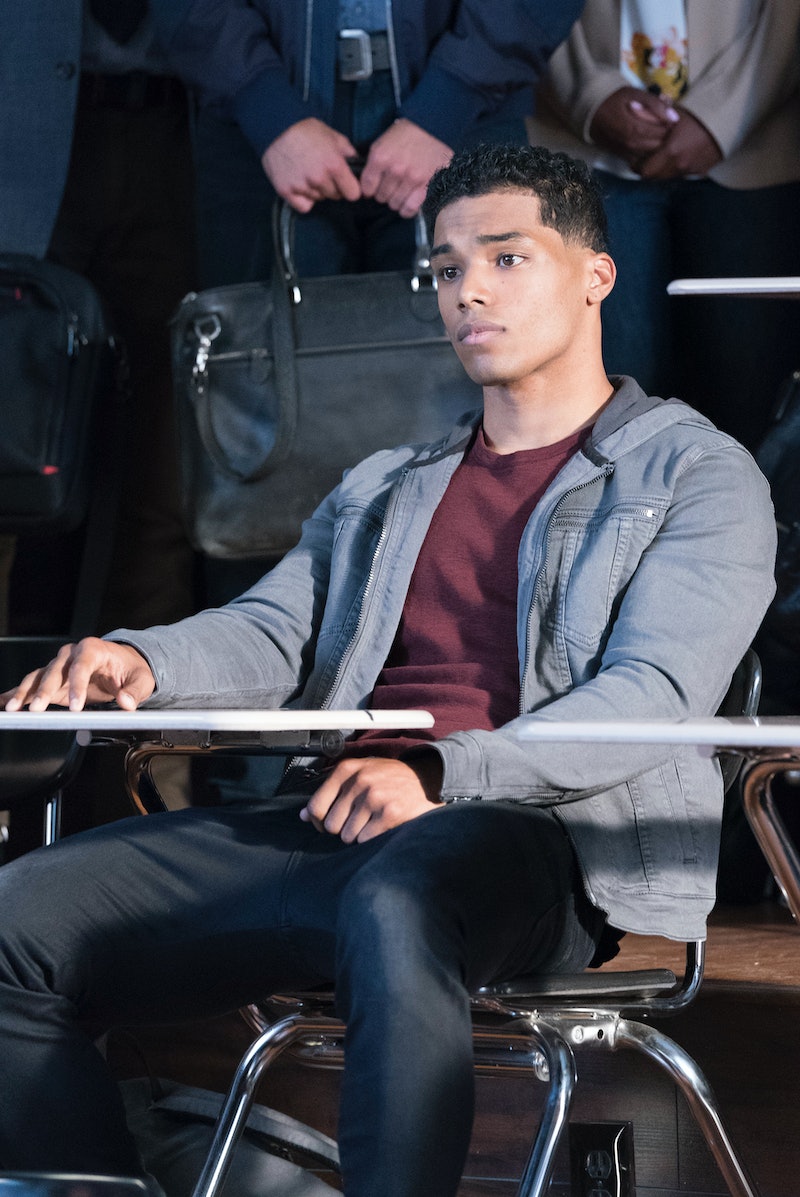 This season’s big murder mystery on How to Get Away with Murder is one step closer to a resolution but it doesn’t feel like it with so much new information. Gov. Birkhead has threatened to tarnish Annalise’s reputation by exposing adoption paperwork, Nate Sr.’s murder was swept under a legal rug, and Gabriel is trying a little too hard to get close to Michaela and score an invite to the Coliver wedding. And, Bonnie’s snowy murder adventures got more complicated when she told a second person to leave with the victim’s body and car. So, is Gabriel is dead on HTGAWM or did another man bite the dust? There's evidence that supports and debunks this theory.

Last episode, Gabriel and Michaela developed a fast friendship as they worked together to assist Annalise with the Nate Sr. murder case. Their efforts were to no avail, but Michaela was clearly getting lost in Gabriel’s dreamy eyes and smile, which made Laurel uncomfortable because she knows about his past.

She’s been watching Gabriel via Frank’s surveillance and discovered that he has been studying Michaela’s photos. This means he’s making a calculated and conscious move to get close to Michaela. Asher has also invited Gabriel to the wedding, which kind of makes sense because he has no friends and they are neighbors. Gabriel seems a little too thrilled to be at the ceremony, which makes him even more suspicious. What are you doing Gabriel?

But Asher probably rescinded that offer after he heard Michaela in Gabriel’s apartment. After making sure Asher was sound asleep, Michaela stopped by to check on Gabriel following the bachelor party. He answered the door with no shirt on and it was no time before they started making out. And, honestly, who can be mad at her for hooking up with Gabriel?

Of course, Laurel and Frank are watching the video feed because they are complete creepers. Laurel demands that Frank tells Annalise about Gabriel or she will spill the beans and, in TV trope fashion, they are interrupted by Bonnie appearing from thin air. How did she get in the apartment? Bonnie looks at the video with a surprised face but the scene cuts before viewers get her full reaction. It looks like Frank will have to explain why he’s stalking Annalise’s student.

As usual, the biggest shocker came in the episode’s closing minutes. Bonnie is seen walking away from a dead body and towards someone else. The point of view switches to the second person who can see Bonnie and the clear outline of a man wearing a suit and a light colored shirt. She gently tells this person to calm down and follow her instructions to take HIS car, the body, and stay calm while she takes care of everything. It’s a pretty explosive way to set up the mid-season finale and narrows down the possible victim.

A post-show preview gives a quick snippet of the wedding ceremony, including the audience. Eagle eyed fans may notice that Nate and Asher are wearing dark suits. Later in the clip, Gabriel is seen standing at the front of the church with a black suit, tie, and white shirt on — just like the murder victim. So, it looks like these three are the strongest possibilities at this time.

Asher was spotted in a previous flash forward having an, um, intimate moment with Connor’s mom during the reception, so it’s probably not him. Plus, he's wearing a dark shirt, which doesn't line up with what was shown in the scene.

Nate is always a solid guess, especially since Bonnie has been angry with him for prying into her past and has his phone for some reason. But this doesn’t rule Gabriel out. He hasn’t been officially spotted at the reception, so his whereabouts are a mystery at this point. If he really is a major threat to the group, it would make sense for Bonnie to kill him with no hesitation.

And, perhaps Oliver or maybe even Nate are the person she is talking to in the snow. What if she took Nate’s phone to prevent GPS tracking? This show will definitely make you a conspiracy theorist.

But, the Gabriel theory also doesn’t make sense for several reasons. First, it would be almost pointless to take him out so quickly. Why would the show reveal his past and murder him in the same episode? The buildup for this character has been going on since the end of Season 4, so it’s likely that he will stick around for some time.

And, he’s also seen in the preview dancing with Michaela inside a wedding tent and talking to Annalise, so he's pretty busy that night. However, the clip also shows glimpses of Nate and Connor, so who knows what can be trusted at this point? Clearly, there are some time differences here to throw fans off and keep them coming back for more.

Find out what happens to Gabriel on Thursday at 10 p.m. ET.