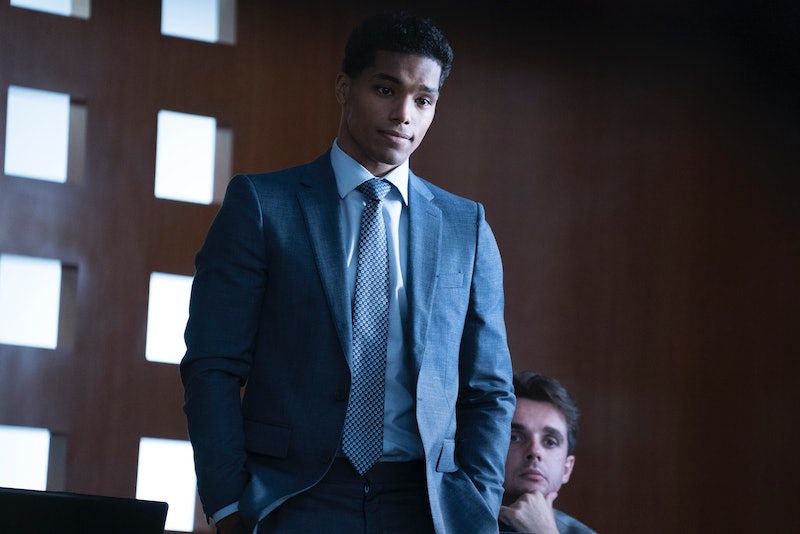 Just when you think things can’t get any messier, How to Get Away with Murder throws more twists into its intricate Season 5 arc. The Keating Four are all thirsting for Gabriel, Annalise and Tegan are becoming besties to Michaela’s dismay, and Nate finally opens up about his Bonnie investigation to Annalise. But, one of the most shocking moments happened when Frank’s ongoing investigation revealed that Gabriel Maddox’s real name is Mark Jackson. The plot surrounding this good-looking (albeit flip-phone carrying) student is getting juicier each week.

In Episode 3, Gabriel is busy studying alongside Annalise’s other clinic students for an exam in front of the ethics board in order to keep assisting in appeal cases. It seems that everyone has a job and purpose besides Frank, who spends his time either watching Gabriel on secret surveillance cameras or awkwardly trying to be his friend. Frank continues his creeper activities when he sneaks into Gabriel’s apartment wearing his murder gloves to dig around for clues.

He goes straight for a mysterious bag hidden in the fireplace (remember, he's been watching Gabriel, so knew where it was) and discovers an Illinois Driver’s License attached to wads of cash. The picture is definitely Gabriel, but the name on the license is Mark Jackson, a Chicago native who was born in 1993. Whoa. Gabriel (or should we say Mark) is really as shifty as he seems. Frank takes a minute to study the license before he slips it back into place. But, before he puts the bag back, he takes a hard drive and quickly heads out the door. Showrunner Pete Nowalk teased up this scene on Twitter and had fans wondering which name is real and which one is an alias.

4362 Nemeck Street doesn’t appear to be a Chicago address in real life, but knowing Frank (and considering all the free time he has on his hands), he will likely make a trip there to find out more information. Meanwhile, Gabriel/Mark is oblivious to Frank’s stalking and strikes up a conversation with Laurel at their study session. He tells her to take it easy on herself as she juggles multiple responsibilities and reveals that he is the product of a single parent household so she has his empathy.

Laurel’s feathers are a bit ruffled by his straightforwardness, but she’s the first out of our core group that Gabriel has interacted with on an individual level. Is he trying to get close to her for a specific reason? This could be a very early hint at the pair being possibly connected in some familial way. Or, perhaps the only connection is a potential love affair, which would be too much. If this is the case though, then Laurel is a certified expert on how to get fine and problematic men to fall in love with you.

Speaking of fine and problematic men, Frank’s hard drive discovery leads to a shady meeting with Otis, an underground IT expert who says the drive has a browser that allows the user to send anonymous emails. Otis says he can do an installation that allows Frank to see everything that Gabriel does on his computer. Frank seems extremely impatient and tells Otis that he has 24 hours to complete the install before briskly walking away.

This encounter brings up so many questions. Why is Frank is such a big hurry? It could be because he simply wants to get the drive back into the bag in a timely fashion. Or, Frank may think that Gabriel is extremely dangerous in some way, which isn't good news because Frank can be pretty scary too.

Is Frank working for someone? He appears to be on his own as Annalise works with Caplan & Gold while Bonnie continues her work at the D.A.’s office, but perhaps he has been hired to keep tabs on Gabriel by the mysterious person on the phone. He’s always up to something sneaky so this would make sense for him. And, why is Gabriel so secretive about everything? He could just be a rare college student who eschews technology, but this is HTGAWM so he has to be a terrible person, right?

Frank switches back to friendly weirdo mode and calls Gabriel to see if he is down for a drink. Gabriel declines because, unlike Frank, he has a life and non-stalkery things to do as a law student. In the end, Frank meets back up with Otis to pick up the drive and puts it back into Gabriel’s apartment. He almost gets caught in the act by a drunk and desperate Michaela on her way to embarrass herself at Asher’s apartment across the hall.

Frank re-directs the conversation and helps Michaela save her dignity but he’s not out of the clear yet. Oliver notices Gabriel talking to his “mom” and recalls a conversation about Frank asking him how to clone a flip phone. This may seem coincidental, but Gabriel is the only twenty-something in America who doesn’t carry a smart phone so it wasn’t hard for Oliver to piece it together.

More like this
The Kenan & Kel Reunion On SNL Took A Dramatic Turn, Thanks To Keke Palmer
By Brad Witter
Keke Palmer Just Announced She's “Going To Be A Mom” On SNL
By Brad Witter
Everything To Know About 'The Peripheral's Potential Season 2
By Brad Witter
This Tiny Clue In 'Wednesday' Foreshadowed That Season Finale Twist
By Grace Wehniainen
Get Even More From Bustle — Sign Up For The Newsletter