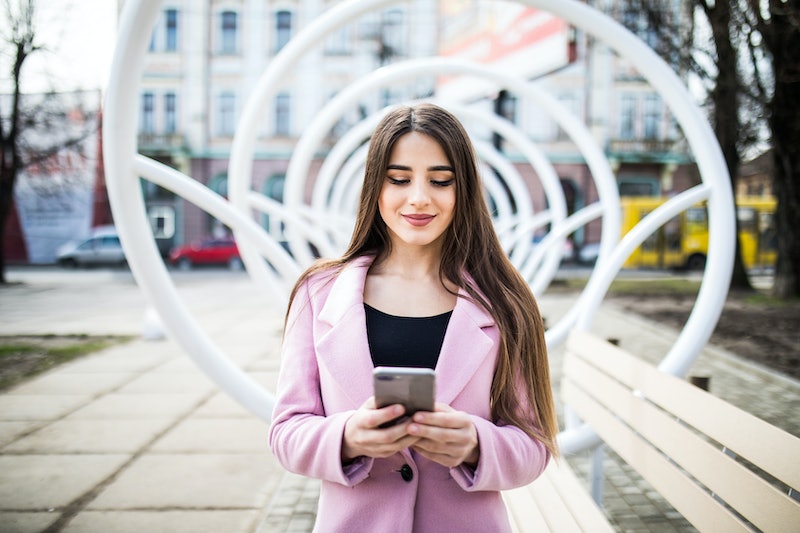 The latest cleverly named trend in the world of dating has literary roots — but what does "Gatsbying" mean? The term was recently made popular in a hilarious Reddit post by user CupcakeWarrior, which reads:

"Posting a Snapchat to your story and then waiting for that one specific person to watch it, is the modern day equivalent of Gatsby throwing elaborate parties seeking Daisy's attention."

There you have it — there's finally a word for a behavior that any social media fanatic is probably all too familiar with. Using social media to flirt is not at all a new phenomenon, and Snapchat in particular is a platform that provides endless opportunities to get your crush's attention. If you've ever posted a ~fire~ selfie and then compulsively checked to see if that one special person has finally viewed it, then you're guilty of Gatsbying. But according to NYC-based dating and life coach Francesca Hogi, that's actually totally normal and nothing to be ashamed of.

"Humans have done this since the beginning of time — it's all part of the mating ritual," Hogi tells Bustle. "In the old days, you put on a cute outfit and casually lingered outside of the classroom your crush happened to be leaving at that exact moment. Or you threw a huge elaborate party you knew your crush would definitely attend! Everyone has done some version of this. Social media is tailor-made for those opportunities to be top of mind for your crush."

But Does It Actually Work?

Even though you might get a thrill from seeing that someone you like has viewed your Snapchat Story (and thus seen you looking cute, having fun, etc.), that doesn't mean it's the most effective flirting tool out there.

"The problem is, back in the day eventually something would happen — you would either finally talk to each other, and go on a date or you'd find out they weren't interested and you'd lick your wounds and move on," Hogi says. "Today, the problem is that Gatsbying can go on indefinitely. A lot of the time it just goes nowhere. There is no substitute for real life, face-to-face communication. That's where the magic happens!"

Let's be honest with ourselves: just because someone views your Snapchat Story, it doesn't necessarily come with a deeper meaning attached. While it can still feel good to know they're looking, Hogi says to beware of the potential that you're getting your hopes up by (perhaps incorrectly) assuming that a particular person is into you, based solely on the fact that they viewed your Snaps.

"It might be giving you a false sense of togetherness or connection, which is no good for you."

"Just because someone sees you online or likes something you post online doesn't mean they actually like you," Hogi says. "It might be giving you a false sense of togetherness or connection, which is no good for you. You deserve to have genuine connections that you don't constantly have to second guess."

In addition to making you feel, perhaps falsely, that you and your crush are ~connecting~ thanks to your Gatsbying ways, there are other potential costs to relying so heavily on one social media platform to do the heavy lifting when it comes to your flirtations.

"Another potential pitfall of Gatsbying is creating a false persona that you (mistakenly) believe is better than the real you," Hogi says. "Always make sure that you're being true to yourself. Look good, but look like yourself. Don't pretend to be someone you aren't or be into something you don't really care about just to try to make someone like you. If you want a grownup relationship, it's essential that you allow yourself to be seen as your authentic self."

Don't get me wrong — you should totally feel free to keep curating your Snapchat Story however you see fit, and if that means looking cute in the hopes your crush checks you out or makes a move, then more power to you. But the important thing to remember is that forming offline connections is crucial, too.

"Since you're already using social media for courtship, why not use it to actually take the communication offline?" Hogi suggests. "If your crush posts a pic of a great dessert, be bold and ask them to take you to the bakery it came from. If you already interact with your crush IRL, capitalize on those opportunities."

Ultimately, Gatsbying is just the newest slang for something humans have been doing forever. There's no wrong or right way to flirt with your crush, but don't get stuck in an online-only loop of dead-end flirting. Feel free to keep posting cute Snapchats, but it's worth considering DM'ing your crush to ask them on a real, live date — what's the worst that could happen?