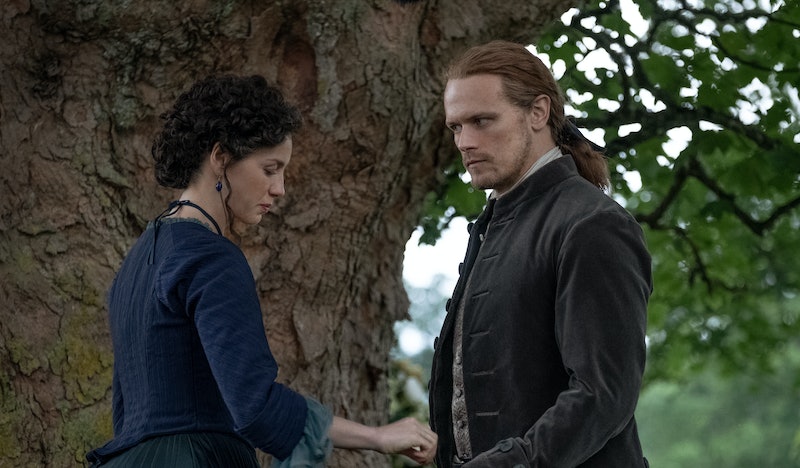 Spoilers ahead for Episode 6 of Outlander Season 5. Though Brianna is aware that Bonnet is alive because she overheard Lord Grey tell Jamie that there'd been sightings of him, Jamie and Claire have yet to tell her they know themselves. That's because Jamie has other plans for Bonnet: he wants to kill him.

In the March 22 episode, he and Claire con Phillip Wylie into securing a business connection with Bonnet under false pretenses, with the hopes of entrapping and killing him. This is slightly different than how things unfold in the book (warning: book spoilers ahead). In The Fiery Cross, Bonnet crashes Aunt Jocasta's wedding to Duncan Innes in order to steal her gold. If he ends up crashing Jocasta's wedding in the show, it will likely be because he just learned Jemmy, who he believes is his son, will inherit River Run. But both circumstances lead to the same outcome, with Jamie dead set on revenge.

However, it's unlikely Jamie will actually kill Bonnet. In the book, Bonnet manages to escape Jamie's wrath at Jocasta's wedding, which only makes Jamie more determined to take him out. Though Bree is furious about the plan, Jamie and Roger ignore her wishes and travel to Wylie's Landing to find Bonnet. Except Bonnet never shows up. Instead, he encounters Claire, Bree, and Jemmy in Wilmington, where he attacks Claire and tries to abduct Jemmy. At this point, Brianna steps in, tells Bonnet that Jemmy will never be his son, and shoots him. Bonnet then flees the scene, leaving it unclear if he survived.

This is an unfortunate storyline, because though Bree was against Jamie's plan from the beginning, she's ultimately the one who's forced to confront her rapist and put an end to a fight she never wanted to be a part of. Jamie and Roger let their own, toxically masculine need for revenge get in the way of the feelings of the only person's who's opinion really matters here. Is Bonnet a bad guy? Unquestionably. But it isn't up to Jamie and Roger to take his fate into their own hands. Hopefully in the show, they'll be able to realize that.

More like this
Netflix Shut Down 'Bridgerton' S3 Rumours About A “Very Dark” Storyline
By Bustle
We’ve Entered The Hot Boy Reader Era
By Samantha Leach
The Plane Crash In 'Dear Edward' Is Based On A 2010 Tragedy
By Grace Wehniainen
'The Last Of Us' Episode 4 Put Twitter Into An Emotional Spiral
By Alyssa Lapid
Get Even More From Bustle — Sign Up For The Newsletter
From hair trends to relationship advice, our daily newsletter has everything you need to sound like a person who’s on TikTok, even if you aren’t.