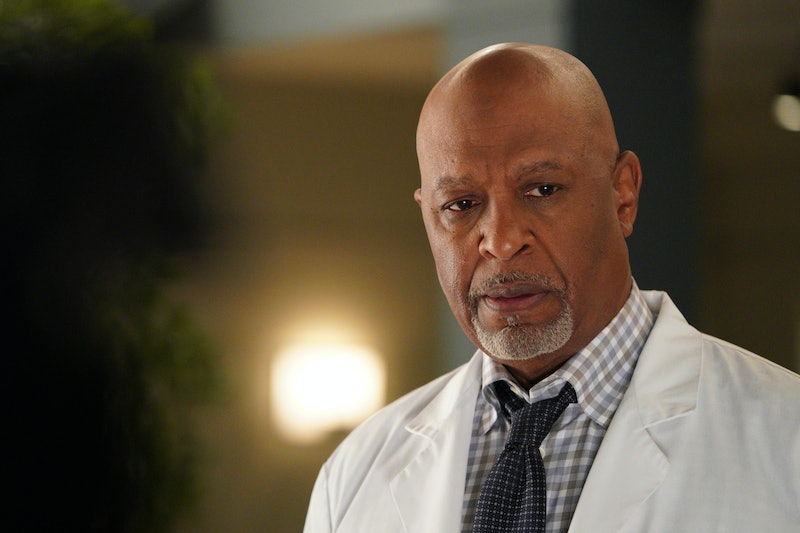 Spoilers ahead for Grey's Anatomy Season 16. With DeLuca's fate (and the final handful of Grey's episodes) hanging in the balance, the ABC medical drama really has no time to waste. Yet that's exactly what seemed to be happening in the March 26 "Love of My Life" episode. With all the action focused on a Surgical Innovation Conference in Los Angeles, fans got some insight into the heartbreaking way Hayes became a McWidow, learned about Teddy's dip in the lady pond, and saw how Maggie got her groove back in real time. All in all, however, it very much felt like a lot of filler. That is, of course, until the very end when exasperated viewers were left wondering: What's wrong with Webber?

With so many other questions lingering back in Seattle, the L.A. field trip was a perfect example of Grey's being Grey's, i.e. heaping more questions onto the pile, instead of answering them. As it turned out, the hour-long time slot was actually riddled with subtle hints about the bomb that was about to drop in the episode's final moments. For starters, upon arriving at the conference for his big PATH pen presentation, Webber mistakenly called daughter Maggie by Meredith's name. "Someone didn't sleep on the plane," she joked.

Then there was an overly contrite Catherine showing up at his hotel room door to "stop the foolishness" of their marital discord. "I regret my behavior," apologized the woman who, just weeks ago, had dropped the mic with her "I'm not sorry about a damn thing" line. Oh, and there was the whole buying an entire hospital to spite her husband thing, too, so, yeah, the apology was slightly out of character. "I'm not sure I believe you're really here," Webber remarked.

Well, as fans later found out, she wasn't. (To be fair, the whole episode had a dream sequence feel, but that could also just be a side effect of social distancing.) After comparing themselves to Anthony and Cleopatra, the couple made up, giving Webber the inspiration he needed to finish the presentation he'd apparently rewritten so many times. "Honey, I think I've cracked it," a pajama-clad Webber gushed as he typed away at a desk covered with crumbled papers — just hours before his big speech.

Whereas Catherine was sitting on the edge of the bed encouraging him in one moment, in the next frame she disappeared, her voice suddenly sounding muffled and distant. Sure, someone with the financial means of Catherine Fox could have easily hopped a private jet back to Seattle, but when she was later shown convened at Grey Sloan to watch a livestream of her husband's presentation, it became clear that Webber had hallucinated their whole interaction.

From there, things went from bad to worse. Despite pouring his blood, sweat, and tears into the PATH pen, Webber announced to a packed audience that he, instead, wanted to discuss how, with his "brilliant wife's help," he'd "figured out how to cure cancer." Cue an imaginary record screech, as his presentation slides included nonsensical doodles of everything from a smiley face to a heart with Catherine's name scratched out in the middle.

"Dear lord, he's drunk," Catherine told Jackson back in Seattle, as Bailey began to look increasingly worried beside them. As a sweaty Webber continued rambling, Maggie (smelling like sex, apparently) told Hayes and Teddy she feared something was wrong and attempted to pull him from the stage. "Who are you?" he asked his daughter. When Hayes stepped in to assist, Webber snapped, "Get your hands off of me!"

Maggie pleaded for someone to call 911. "I think he's having a stroke," she said. As Webber was carted out of the convention on a gurney with an oxygen tube in his nose, he asked, "Maggie, what's happening?" Her reply: "I don't know."

Neither do the rest of us. In previous episodes, fans learned of Webber's hand tremor and saw his dramatic outburst over office furniture. In his hallucination, Catherine also mentioned her foundation board interpreting her behavior as a sign of dementia. Could that be another clue? Still unclear.

In the previews for the April 2 Grey's episode, Bailey is seen briefing the staff on a 65-year-old male suffering from memory lapses and erratic behavior. "He's not the Richard Webber you know and love," she said. "He is our number one patient." It seems all hands will be on deck to make Webber well, and none other than Meredith Grey herself will be at the helm. "Richard, I can fix you because you are the one who taught me everything I know," she tells the one-time chief in the clip. And if anyone can help him, it's Meredith, right?

Following Alex Karev's recent departure, Webber is one of only three OG cast members remaining, and Grey's fans seem to be in agreement that he must be protected at all costs.

More like this
Ellen Pompeo Is Stepping Back From 'Grey Anatomy' For More Than Half Of Season 19
By Brad Witter and Sophia Moore
'The Sandman’s Ending Is A Departure From Neil Gaiman’s Comic Book Series
By Kadin Burnett
Why Did Meatball Leave 'The Bachelorette'? His Second Chance Didn’t Last Too Long
By Grace Wehniainen
Memes & Tweets About Logan Switching From Rachel To Gabby On 'The Bachelorette'
By Grace Wehniainen
Get Even More From Bustle — Sign Up For The Newsletter