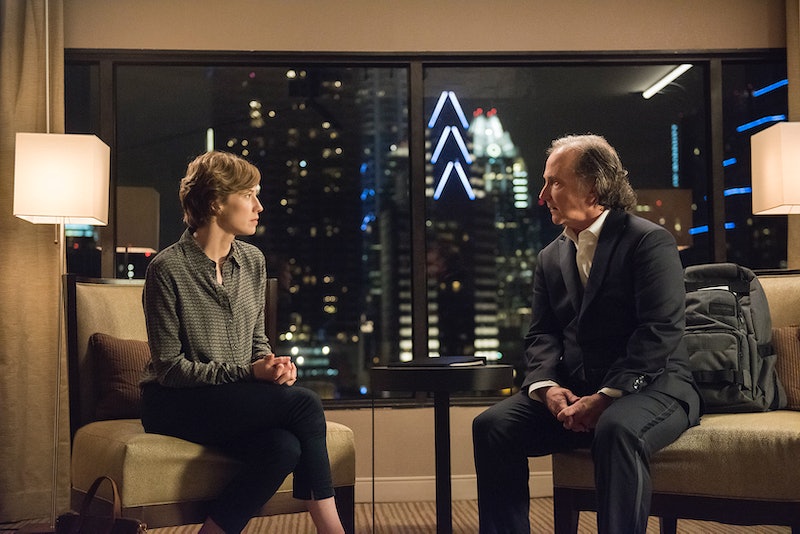 Coming from the man who created Lost, viewers were probably pleasantly surprised when Sunday's episode, "Don't Be Ridiculous" actually answered a ton of the questions raised by the Leftovers Season 3 premiere. But naturally, this being a Damon Lindelof show, a new mystery was raised as well: Does "the device" actually work on The Leftovers? Or is it an elaborate hoax?

Throughout the hour, we learned how Nora broke her arm (she broke it herself to cover up a tattoo she got to cover up another tattoo she got of her children's names); what happened to Lily (her biological mother, Christine, returned for her and Nora gave her up without a fight); and where Erika Murphy is (separated from her husband, living by herself on the other side of the bridge to Miracle). But now all of those mysteries seem insignificant when compared to the possibility of a machine that can transport people to wherever the Departed went.

That's exactly what Perfect Strangers star Mark Linn-Baker promised to Nora Durst when she came to visit him in St. Louis. He alleged to be speaking on behalf of a group of scientists who had invented a device that could reunite leftovers with their loved ones. Supposedly, these scientists discovered trace amounts of radiation left behind on the day of the Sudden Departure — and by blasting a person with massive amounts of this radiation, they claim to be able to essentially recreate the conditions of that mysterious event and send their subjects… beyond.

So does this device actually work? Or, as Nora initially believes, does it simply incinerate its victims? Of course, there's no way to prove what happens to the subjects after they enter the machine, so it makes for the perfect leap of faith. But apparently it's a leap of faith that hundreds of people have already made, as Mark also gave Nora a file full of testimonial videos made by volunteers about to undergo the treatment. And these weren't hapless suckers, either; they were apparently sane and intelligent people — including at least one Nobel Laureate, according to Mark.

Since no one can ever really prove whether the machine works or not, perhaps the more relevant (and pressing) question is: Does Nora believe in it? At first, she seemed to dismiss the idea out of hand. But by the end of the episode, she was accepting instructions over the phone on where to meet the scientists to undergo the treatment — in Australia, natch. Did she agree to go because she hopes to reunite herself with her Departed children? Or is she going on behalf of the Department of Sudden Departures, in order to expose the machine as a fraud?

Only one thing is certain at this point: thanks to the flashforward at the end of the Leftovers Season 3 premiere, we know that Nora won't be vaporized after arriving in Australia. Anything else that happens between now and then, however, is still very much up in the air.