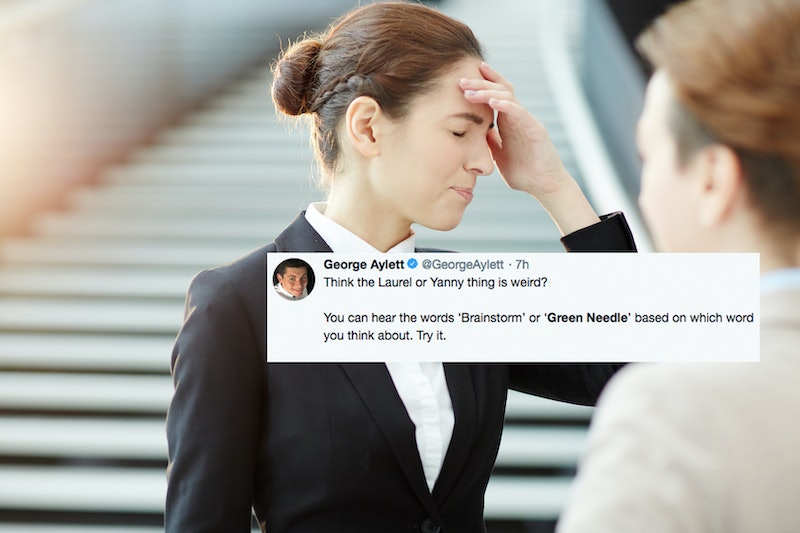 pressmaster/Fotolia
By Jessica Booth
May 17, 2018

Just this week, we were introduced to a video clip that would change everything. It seemed innocent enough: a recording of a robotic voice saying one word several times, playing over the image of a poll question asking "Yanny or Laurel?" After being posted on Reddit, then Twitter, the clip became an internet sensation, with social media users fighting over which word is correct. Relationships were broken up over the debate (maybe). Friendships were ruined (possibly). And even though it's barely been a week since this debate began, we may already have a new "Yanny or Laurel" situation on our hands. A Twitter user recently posted a new video clip where you can supposedly hear two different words depending on what you're thinking about it, and it's got everyone asking one question: Does this audio clip say "brainstorm" or "green needle"?

Twitter user George Aylett posted the video on May 17 with the caption, "Think the Laurel or Yanny thing is weird? You can hear the words ‘Brainstorm’ or ‘Green Needle’ based on which word you think about. Try it." Honestly, another confusing situation like this is literally the last thing we all need, but who can resist a good debate about something like this, am I right? There's a reason The Dress was such a big deal.

Listen to this voice recording for yourself to see what you hear. Now, supposedly, you will hear whichever word you're thinking about, whether it's "brainstorm" or "green needle." Try it out:

I have watched this a few times, and each time, I have been amazed. Here's my personal experience: when I first listened to the video, I thought about the word "brainstorm" as I watched... and lo and behold, I heard "brainstorm." I waited about 30 seconds, then focused on the phrase "green needle" while watching, and heard... brainstorm, and couldn't imagine hearing anything else. I felt frustrated. So, I waited 20 minutes, and then I watched again, this time just focusing on "green needle," and, guys? I heard green needle, clear as day! I gasped out loud and woke up my cat. This is weird. Is my whole life a lie? Do I really hear "Laurel" whenever I watch that other video? Actually, don't answer that. Of course I hear "Laurel."

This video, of course, also comes from Reddit, and was originally posted by user squidjeep. The very first comment simply says "brain needle," so now every time I listen to the video, that is what I hear. It's very interesting!

So what does it all mean? I am sure that there is some sort of long explanation for this, I just don't exactly know what it is. On Reddit, some users tried to figure it out:

According to those users, we are essentially hearing what we want to hear out of a low quality sound. This does make sense, and it also reaffirms the idea that brains and perception are wild! Our bodies are so cool.

Twitter users agree, and everyone seems to be pretty overwhelmed by all of this new information on top of everything else we've been dealing with this week.

However, some users are having trouble hearing both words, no matter what they think of or how many times they play the video: