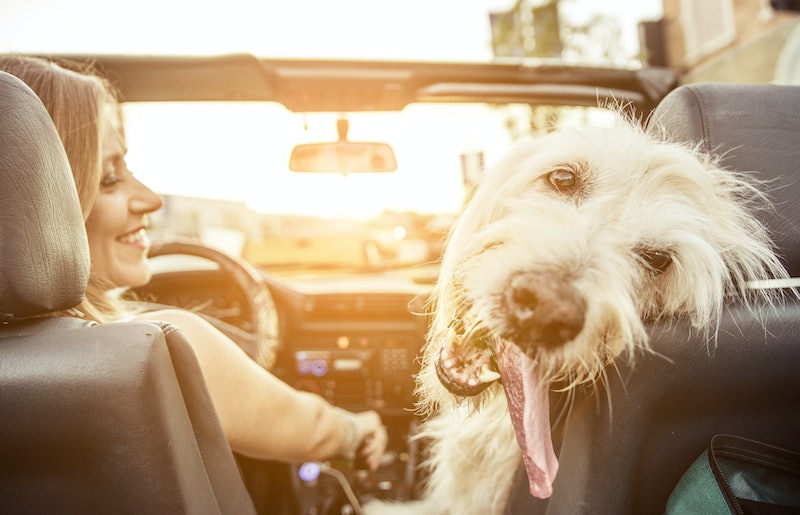 Dogs are sneaky sneaky. That comes as no surprise. They quietly pilfer fallen table scraps and stash them under the couch. They sneak into your bed after you've fallen asleep, even though you specifically told them not to. They try to blame the, *ahem*, "present" in the hallway on somebody else. They might be even sneakier than we originally anticipated, though. The findings of one study suggest dogs know how to lie to get what they want — only in the cutest way ever, though.

The study, published in Animal Cognition, aimed to find whether dogs could knowingly mislead humans to get the treat they wanted. The researchers set up three food box locations: one had the dogs' favorite treat, the second had a treat they didn't like quite as much, and the third was empty. The dogs were then taught to lead two different humans to the treats: a cooperative one and a competitive one. The cooperative human would give them whatever treat was inside, and the competitive one would keep the treat for themselves. Selfish!

Here's where it gets really crazy.

On the first day of the study, the researchers found the dogs would lead the cooperative partner to the box with their favorite treat more than they would with the competitive partner.

By day two, they were leading the competitive partner to their favorite treat less and less, and more to the empty box. In other words, the dogs understood that by misleading the competitive partner and taking them to the least favorite treat box or empty box, they still had a chance to get the treat they wanted. In a very short amount of time, they were able to determine who would help them accomplish their goals and who would get in their way. If that's not brilliant, I don't know what is.

Now, if only humans could consistently do this...

Perhaps it shouldn't be all that surprising just how genius dogs are, though. After all, we already knew dogs are pretty intelligent creatures. Let's not forget the 2016 study published in Science which found dogs process word choice and tone in a similar way humans do, using both sides of the brain to interpret each before coming to one conclusion about what you're saying. This study found dogs respond best to both a positive tone and positive words. Other research from the University of York that we covered in a previous article echoed similar findings, learning it's both the pitch of your voice and the words you use that can determine how much and what kind of impact you have on your dog.

All of this means it doesn't matter how sweet I sound when I say to my dog, "We're going to the vet! You're going to get a shot! They're going to take a fecal sample!" My pup will still know there is a foul plot afoot, and he's going to be really ticked with me on the card ride home.

There's even more science behind the brain capacity of dogs, too. There was another study published that same year in The Royal Society Publishing which demonstrated dogs can indeed sense and interpret emotions in both other dogs and even humans, by processing auditory and visual cues. Furthermore, this ability to categorize emotions occurred without any type of training, suggesting it's something dogs are innately capable of. Have you ever noticed your furry pal was a wee bit more attentive when you were feeling down in the dumps about something? That was no coincidence. Like the best friends they are, they truly (and literally) can sense when we're upset or not feeling well. It's that unconditional love we value so much in our pooches — their refusal to leave your side when you're going through a difficult time.

This study on dogs and their precious treats is further proof dogs know what they're doing — and if you don't give 'em their treats, they'll find someone who will.