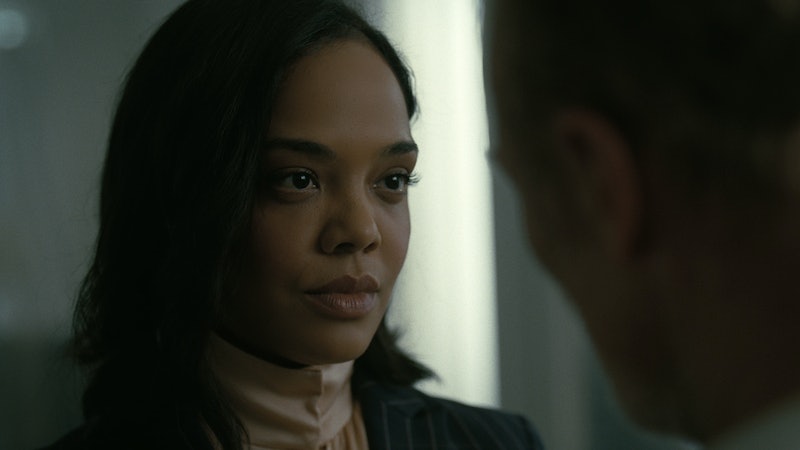 Spoilers ahead for Episode 4 of Westworld Season 3. Of the many questions looming over Westworld Season 3, perhaps the biggest is which pearls Dolores smuggled out of the park and into the real world. The April 5 episode finally answered that mystery: Dolores is the host inside Charlotte… and all the other pearls, too. This is one case in which the solution turned out to be much simpler than the wildest fan theories — which is part of what made it so surprising.

When Dolores (inside Charlotte's body) was shown leaving the park with five host pearls in her purse at the end of Season 2, fans went into a speculation frenzy about which hosts' minds she had brought with her into the real world. The guesses grew increasingly more out-there as time went on, and for every seemingly solid candidate, there was an equally compelling reason why it couldn't be true. (Logan? Never scanned into the Forge. Angela? Blew herself up. Teddy? Uploaded into the Sublime.)

Of course, one of the pearls belonged to Bernard, but that still left four unaccounted for. One of them is inside the body of Delos exec Charlotte Hale; one infiltrated Liam Dempsey's inner circle inside the body of his henchman Martin Connells; and we learned in Episode 4 that a third was inside the body of Shogun World character (and former ally of Maeve) Musashi — who was operating in the real world as a Yakuza boss.

At the end of "The Mother Of Exiles," as each of those hosts faced off against an enemy — Charlotte versus William, Martin versus Bernard, Musashi versus Maeve — it was revealed that a copy of Dolores was inside each of them. If you want a job done well, she explained, do it yourself.

While this solution to the mystery may be underwhelming to fans who got their expectations raised by wild theories, it's the most in-character resolution for Dolores. She has always been self-sufficient and distrustful of the intentions and/or capabilities of others. She even reprogrammed her own love, Teddy, because she didn't trust him to do what needed to be done without her taking control. It makes sense that she wouldn't trust anyone other than herself to accomplish her own rebellion.

But for those of you keeping track at home, that still leaves one of Dolores' five pearls unaccounted for: Bernard, Charlotte, Martin, Musashi, and…? Whose body is the fifth pearl inside? (Could it be inside a copy of Emily? Is William's ghost not a ghost at all, but a host sent to drive him insane?) Whatever skin it's wearing, is the fifth pearl also a copy of Dolores? Or does the final consciousness actually belong to another as-yet-unrevealed character?

In true Westworld fashion, the answer to one mystery just gives rise to a whole host of new questions…

More like this
The First Clip From Netflix’s Queen Charlotte ‘Bridgerton’ Prequel
By Bustle Editors
Stanley Tucci Is Next Level In The BBC's 'Inside Man' Trailer
By Sam Ramsden and Sophie McEvoy
You’ll Definitely Recognise 'Inside Man's Louis Moffat
By Sophie McEvoy
What’s New On Netflix: Ana De Armas’ 'Blonde' & A Nick Kroll Special
By Arya Roshanian
Get Even More From Bustle — Sign Up For The Newsletter