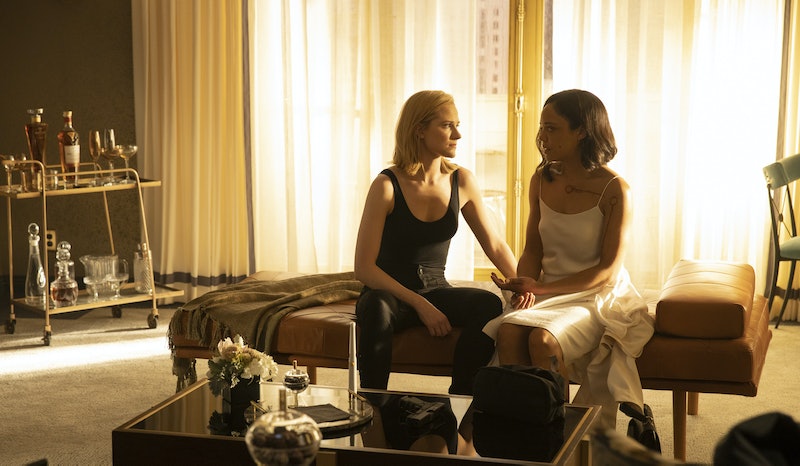 Spoilers ahead for Episode 3 of Westworld Season 3. Because Teddy was Dolores' right-hand man while they were in the park together, it stands to reason that she'd choose his consciousness to put into the new Host Charlotte on Westworld now that she's back in her own body. There are few people (er, robots) that Dolores can trust, and if she's going to take down Rehoboam, she needs to keep her allies close.

The only problem? At the end of Season 2, Dolores put Teddy's consciousness into the Sublime, so him being in Charlotte would mean she then immediately took it back out again, and that doesn't make a whole lot of sense. Does that mean Teddy is absolutely not the host in Charlotte? Not necessarily. Let's assess.

The host in Charlotte is both extremely compassionate and staunchly devoted to Dolores, which were Teddy's defining traits. It's hard to see any host caring about Charlotte's son as much as Teddy would (except for, say, Maeve, but she's obviously out of the question). Plus, the power dynamic between Dolores and Host Charlotte is very similar to Dolores and Teddy's: in Season 2, she manipulated Teddy by programming him into a brutal killer, which could explain why Host Charlotte referred to herself as a "predator."

Perhaps most tellingly, it's clear that Dolores shares a deep connection with whoever is in Charlotte. When Host Charlotte asks, "Why must I be her?" Dolores replies, "Because I trust you." She also tells Host Charlotte that "No one knows you like I do. No one knows me like you," and that "You belong to me." Again, it's hard to see her saying those things to anyone besides Teddy (and when they spoon in bed, it parallels a Season 2 scene of Dolores cradling Teddy's dead body).

As for how the host could be Teddy, the most likely (and only logical) explanation is that the consciousness Dolores placed inside of Charlotte is a replicate, and the original Teddy is still in the Sublime.

When Host Charlotte strangled the pedophile who got too close to her son, she seemed to revel in the violence, sneering that she "remembers who she is" now. Though Teddy became a much crueler version of himself in Season 2, that was only after Dolores tinkered with his programming. At his core, Teddy is not the predator Host Charlotte says she is. He died by suicide in order to avoid continuing to hurt people; it seems unlikely he would now suddenly be onboard with Dolores' plan to destroy humanity.

It's also worth noting that in a trailer for the rest of the season, Maeve asks, "Who did she put inside of you? Is that you in there, Teddy?" It feels improbable that the show would put a huge spoiler in a trailer. Then again, that could be exactly the reason they did: to make us second guess ourselves.