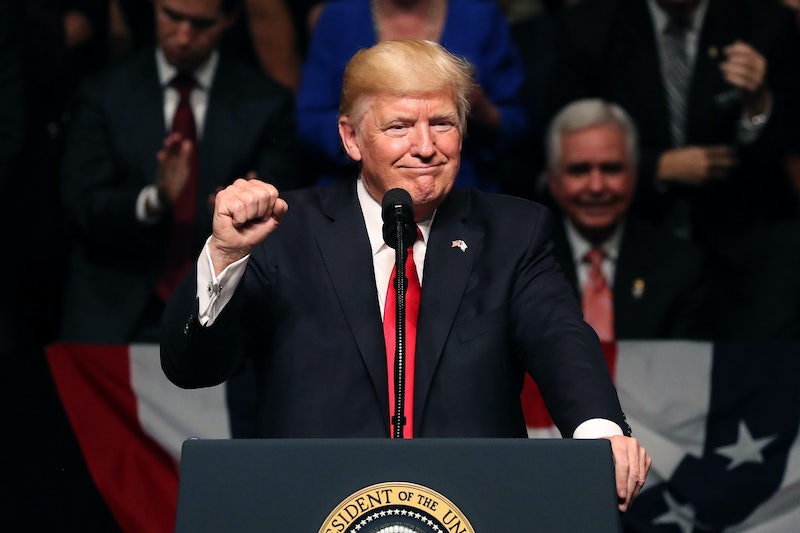 In a country that traces its origins back to an angry letter directed at the king of England, there's been a long tradition of calling the current commander in chief the "Worst President Ever." And, six months into his administration, it looks like Donald Trump has the lowest approval rating of any other president at this time in their presidency. At this point, more people strongly disapprove of his performance than disapproved of any other presidency since pollsters started asking the question.

But the real reason for Trump to be worried about that number is that this is supposed to be the easy part. Most presidents were more popular in the beginning of their term than they were later on. President Barack Obama averaged 62.8 for the first six months, but 47.9 percent for the whole eight years he spent in the Oval Office. And Trump's average Gallup approval already puts him lower than at any point in Obama's presidency.

It's not the only way that comparisons between Trump and Obama in polls don't do the current president any favors. Obama's time as president was colored by a particularly angry opposition — the people who thought he was Worst President Ever were quite loud. But even the moments of highest anger against Obama featured less rage than Trump receives now.

It's not all bad for Trump. It's still possible for a president to have a rocky start and turn things around after they get their footing. Clinton had the previously mentioned low first-six-month approval average, but his eventual 55.1 percent average approval over eight years far outstripped the 44 percent of his first half-year. Clinton managed to turn things around by shaking up his staff and changing his communications strategy, allowing him to govern competently even in the midst of investigations and scandal. On Friday, Trump's communications team was overhauled, with Press Secretary Sean Spicer replaced by Sarah Huckabee Sanders and Anthony Scaramucci coming on as Communications director. If the White House can turn a more effective public messaging strategy into better governing, they may also be able to turn it into more public support.

But even Bush's unpopularity probably doesn't make him actually the Worst President Ever. A 2017 survey of historians by C-SPAN gave that honor to James Buchanan, the president right before the Civil War who utterly failed at preventing the divisions brewing within the United States from getting worse. Just above him were Andrew Johnson, who stymied efforts to integrate blacks into society after the Civil War and was impeached by Congress; Franklin Pierce, who came right before Buchanan and sowed divisions leading to the Civil War through his hatred of the abolitionist movement; and Warren G. Harding, an early 20th-century president who was notoriously corrupt.

No matter what you think of President Trump, it's hard to argue that he's done anything yet on the scale of causing the Civil War. But give him time. He still has a chance to make his approval rating go back to normal, or all the way down into the gutter.