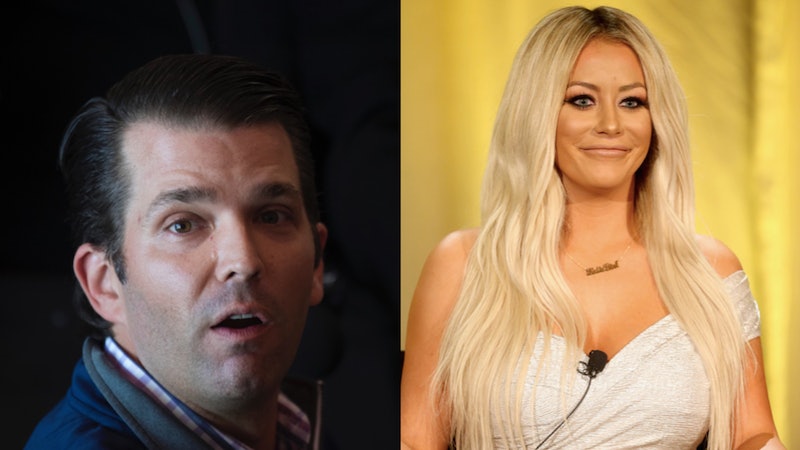 The publisher of the adult entertainment magazine Hustler — who also happens to be a vocal critic of President Donald Trump — has reportedly planned a birthday bash for POTUS' oldest son. According to a Page Six report on Monday, publisher Larry Flynt is throwing a birthday party for Donald Trump Jr., with Aubrey O’Day, Trump Jr.'s alleged former love interest, hosting.

You may have heard of O'Day before. She used to be a member of the pop group Danity Kane and, according to sources that spoke with Us Weekly in March, an alleged love interest of Trump Jr.'s back in the day (though neither of them commented on the report).

The gathering seems to be Flynt's elaborate effort to troll the president and his son on Trump Jr.'s 41st birthday on Dec. 31. David Bryant, Flynt's spokesman, told Page Six, "Larry cannot stand Donald. We literally booked Aubrey just to f*ck with the president." Bustle has reached out to Trump Jr. for comment.

Flynt's promotional poster for the birthday party, which features O'Day on it, stated that the party will be held at Hustler's Club in Las Vegas, which Flynt owns. O'Day is set to perform three songs for the attending crowd, according to the poster.

In April, Page Six reported that O'Day and Trump Jr. had an extramarital affair in 2011. Neither O'Day nor Trump Jr. commented on the report. They met on the set of Celebrity Apprentice during its fifth season. At that time, Trump Jr. was married to Vanessa Trump; the couple filed for divorce in March 2018.

If you're aware of Flynt and his politics, you'll know that he's not particularly excited about Trump. That much is also evident in the birthday invitation Hustler Club's general manager Ralph James sent to the White House, according to Page Six.

Page Six reported that the invitation addressed Trump: "You and your family have done so much for this country that we at the Hustler Organization want to show our appreciation by throwing Donald Trump Jr. a birthday party he will never forget."

In 2017, Flynt vocalized his abundant dislike for Trump in an interview with The Hollywood Reporter. "As for Trump, his whole game is intimidation," he told the publication that year. "That's what he does with his tweeting. That's how he controls people, by intimidating them and making them afraid of him. He does the same thing with women."

In 2017, Flynt also offered $10 million to anyone who could provide substantial information that could lead to Trump's impeachment. The advertisement ran in The Washington Post, where Flynt assured readers: "Make no mistake, I fully intend to pay this entire sum."

"Sure," Flynt added in the ad, "I could use that $10 million to buy luxuries or further my business, but what good would that do me in a world devastated by the most powerful moron in history?"

So, it's no surprise that Flynt is keeping up his criticism of Trump and his family. But the possibility of Trump Jr. showing up for this Las Vegas birthday bash is most likely zero.