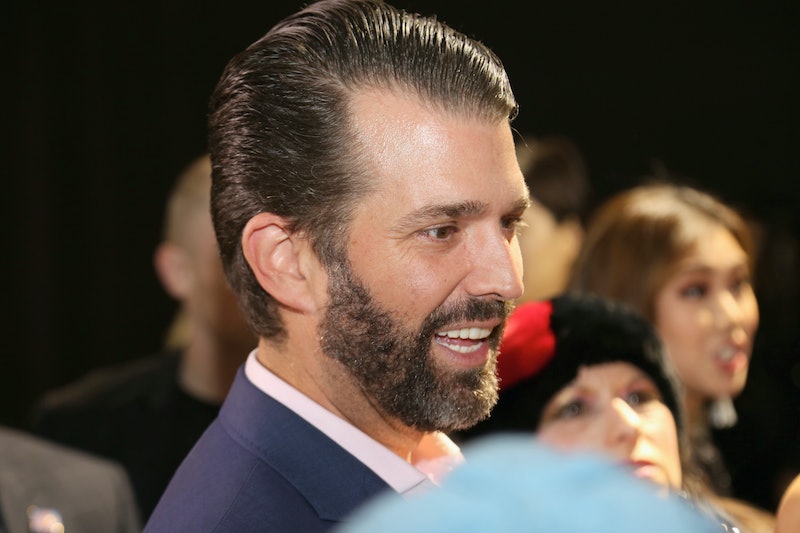 Right-wingers from across the country gathered at the evangelical Liberty University in Virginia this week for the annual Conservative Political Action Conference (CPAC). The event regularly brings together activists, politicians, and other thought leaders in the conservative movement, and this year it has attracted several members of the Trump family. The son of the president is there, and on Friday, Donald Trump Jr. made a #MeToo joke at CPAC that was pretty uncomfortable.

Trump made the remark during a morning panel that also featured Kimberly Guilfoyle (a former Fox contributor and his current girlfriend), Liberty University President Jerry Falwell, and Falwell's wife, Becki. The panelists discussed a range of topics, including gun rights and gender identity. When his wife said that she's raising their child as a girl and "not letting her have a choice," Falwell chimed in to add: "You don't have to raise 'em as a girl, she's got a little baby doll right under her arm every second."

"My boys always had guns in their hands," Falwell added. With a grin, Trump chimed in: "Hashtag me too."

But Trump has expressed some contempt for the #MeToo movement in the past — most notably last fall, when he attempted to discredit Dr. Christine Blasey Ford as she came forward with sexual assault allegations against Brett Kavanaugh (which the judge denied). Trump called Ford's accusations "a political hit job" and mocked her on social media. In an October interview with The Daily Mail, he suggested that he was more worried about his sons being wrongfully accused of sexual assault than he was concerned about his daughters being assaulted.

Trump's initial reaction to the #MeToo movement in 2017 was a fickle one. As The Daily Beast noted, he eagerly drew attention to — and even celebrated — instances when prominent liberals were accused of misconduct. "I would love to be a fly on the wall as the HuffPost has to write these article about their heroes," he tweeted after multiple women claimed that Al Franken had inappropriately touched them. But Trump offered at least one defense of Roy Moore, the GOP Senate candidate who was accused of molesting girls (allegations that Moore denied).

The CPAC panel discussion didn't get less uncomfortable after the first son's joke. At one point during a conversation about guns, Falwell brought up Rep. Alexandria Ocasio-Cortez (D-New York). "I've got 100 cows," Falwell said. "Just let Alexandria [Ocasio-Cortez] show up at my house and try to take my cows away."

Friday was Junior's turn, but the President Trump will speak at CPAC on Saturday. The annual conference is hosted by the American Conservative Union and is taking place from Feb. 27 to March 2.