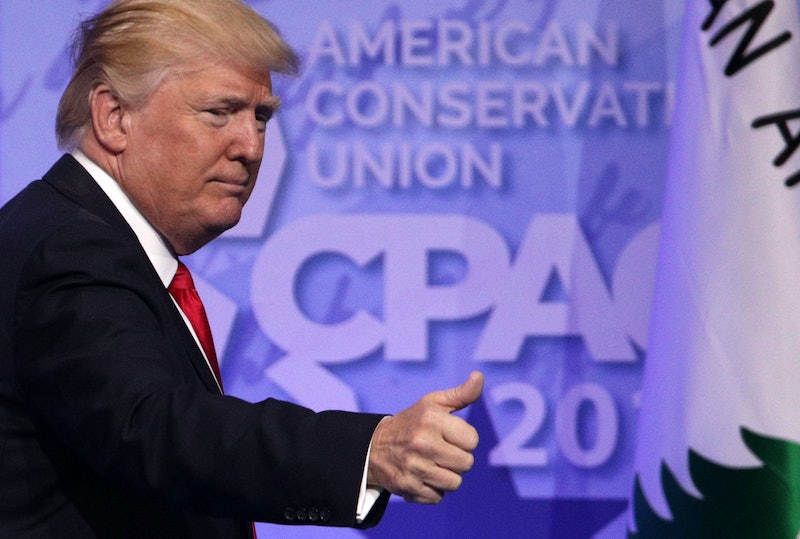 The White House Correspondents' Dinner (WHCD) isn't scheduled to take place until April, but the list of RSVPs for this year's event is already creating buzz. Several media organizations had already announced that they would limit their role in the 2017 correspondents' dinner, but on Saturday, President Trump announced that he won't attend at all. This move isn't just surprising — it's troubling, as Trump may actually need the correspondents' dinner more than anyone.

Let's start from the beginning — or close to it: In January, Full Frontal host Samantha Bee announced that she would host a counter-event on the night of the WHCD, called "Not the White House Correspondents' Dinner." The next month, Bloomberg, Vanity Fair, and The New Yorker announced plans to cancel their respective pre- and after-parties for the main event. In each case, the idea seemed to be an affront to Trump, whose relationship with the media has been downright miserable since taking office.

As of Saturday, Trump himself won't attend the WHCD on April 29. He sent out a tweet saying as much on Saturday, making sure to wish everyone well in the process. He didn't go into detail, so it's impossible to say exactly why the president won't attend, but it's easy to assume that his absence will have something to do with his strained relationship with the media. The correspondents' dinner does, after all, celebrate the media and raise money for journalism scholarships.

Regardless of the specific reason, Trump's refusal to attend the dinner is just the latest development in his ongoing battle with the free press. It's clear from his tweets and the behavior of his spokespeople that Trump doesn't trust the media — but he seems to be missing the point of the correspondents' dinner altogether. Aside from raising money or providing comic relief, the WHCD serves to humanize the administration and remind Americans that the president is just a regular, relatable guy.

Who could forget President Obama joking about old people on Facebook or President George W. Bush poking fun at his vice president at previous correspondents' dinners? On a regular basis, the president's relationship with the media isn't supposed to be chummy. The media is supposed to ask tough questions, keep politicians honest, and hold the administration accountable. Along the way, the White House understandably has to choose its words carefully. But at the WHCD, the everyday rules are gone. There, the media and the administration tend to put aside their differences and any name-calling is done in good fun.

Trump could use some good fun. He probably would never admit to it, but the president boasts the lowest approval rating of any new POTUS in recent history, according to an NBC News/Wall Street Journal poll. The most notable actions from his first month in office have been met with protests across the country — in airports, on city streets, and wherever people gather. In other words, it's not just his relationship with the media that is strained. There's also his relationship with the American people to be worried about.

Although it's still months away, the WHCD could represent the president's best chance at a reputation boost. He could use the evening as an opportunity to level with the American people and the journalists who report on him. Instead, he will likely sit at home and tweet about it.