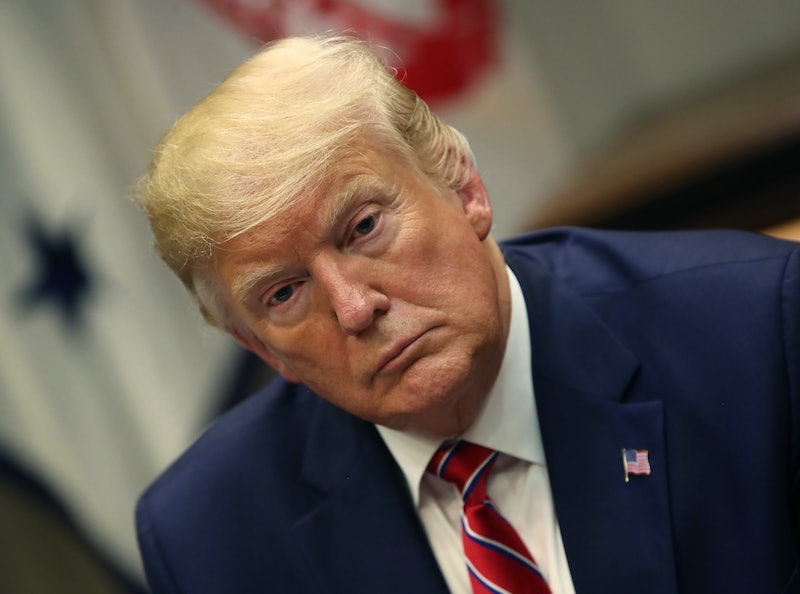 On Wednesday, CNN's Andrew Kaczynski found an interview that just might answer one question you might have about the president: Does Donald Trump read books? On Twitter, the KFile reporter posted a transcript he discovered from a 1980s episode of Crossfire, in which co-hosts Pat Buchanan and Tom Braden asked Trump that age-old question: Who are your favorite authors? Trump's response will make you want to laugh or cry, but I'm going to suggest that you do the former, if only so you don't slip into the latter.

Donald Trump's reading habits — or, perhaps, his lack thereof — have been the subject of scrutiny since his before his election in 2016. The list of books he has plugged in answer to reporters' softball questions is brief. Trump has named Erich Maria Remarque's All Quiet on the Western Front, his ghostwritten The Art of the Deal, "a book on Andrew Jackson," and the Bible — when he can name a book at all. You can now add Tom Wolfe's The Bonfire of the Vanities to that list... sort of.

From the transcript Kaczynski provided, it's unclear what Trump had appeared on Crossfire to discuss in the first place, but the interview could very well be the first time Trump was asked about his reading habits in a public forum. "I think Tom Wolfe is excellent," Trump said, when Buchanan asked about his favorite authors. Buchanan's follow-up question about "Vanity of the Bonfires" — a blooper he quickly corrected — prompted Trump to reply that he had not read the book.

From there, the exchange reads like a masterful satire. Braden asked what book Trump was reading at the time — response: "I'm reading my own book again because I think it's so fantastic." — and Buchanan pressed him to name "the best book you’ve read beside Art of the Deal."

Buchanan: "Bonfire of the Vanities."

Trump: "Yes, and the man has done a very, very good job. And I really can't hear with this earphone, by the way."

Twitter commenters noted that pulling "Tom Wolfe" and "Bonfire of the Vanities" out of thin air would have been easy for Trump in the late 1980s, when the book was first released. Wolfe's treatise on Wall Street's obscene levels of greed and excess has earned the title of "the quintessential novel of the 80s," and, with the novel being set in New York City, it's difficult to imagine many New Yorkers not knowing of its existence around the time of its release.

Trump's lack of literary prowess stands in sharp contrast to the bookish powerhouse that is his predecessor. Barack Obama continues to share his summer reading lists and annual reading recaps with the public, and likely has another book of his own coming out ahead of the 2020 election. That book, which will be the former POTUS's fourth, will fulfill the two-book deal signed by he and wife Michelle Obama. The first book in that deal, Michelle's memoir, Becoming, shattered records to become the best-selling book of 2018.

So we can all take solace in the fact that President Obama is still around, still reading, and still writing. And yet... Well, just re-read the exchange above.

More like this
'Shadow And Bone' Season 2 Pics Show Mal & Alina Starting A New Journey
By Bustle and Bustle UK
‘The Mosquito Coast’ Book Ending Includes A Major Character’s Death
By Brad Witter
The 'Firefly Lane' Book Ending Teases Way More Tears To Come In 2023
By K.W. Colyard
Allie Rowbottom Will Have Her Feminism With A Side of Botox
By Samantha Leach
Get Even More From Bustle — Sign Up For The Newsletter