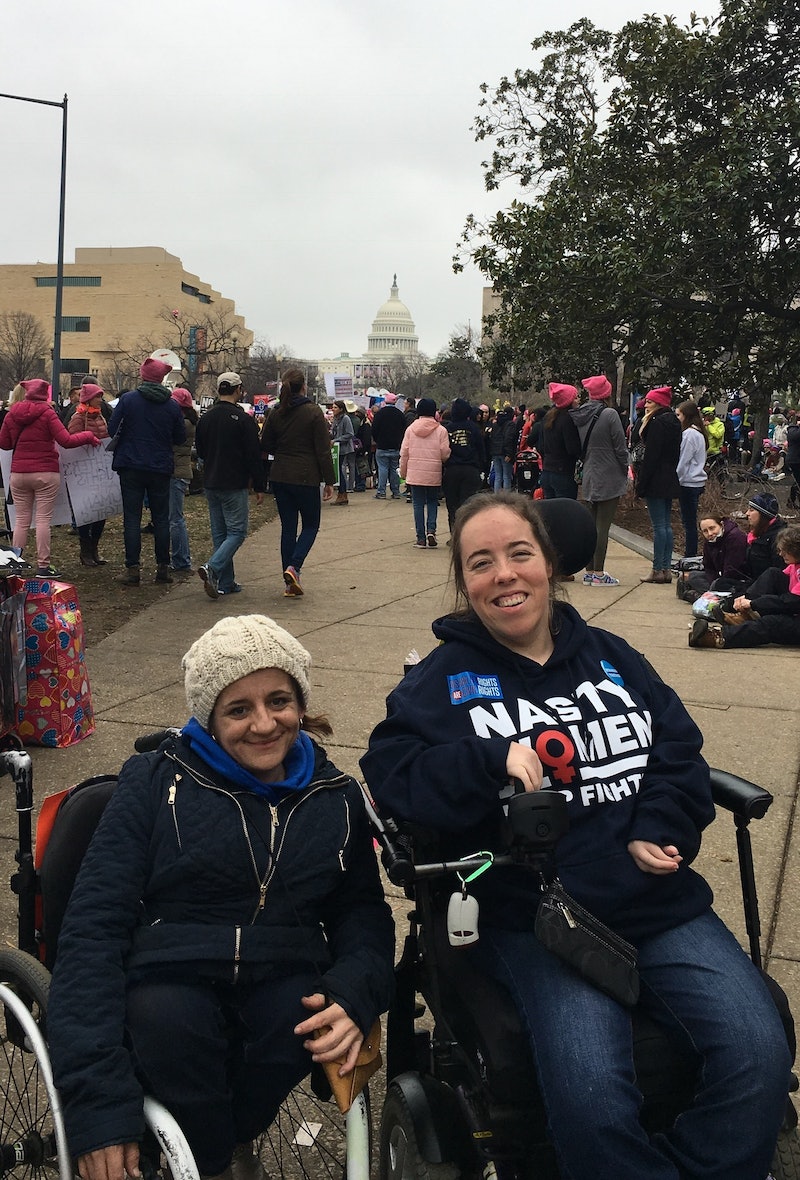 This past weekend, I joined millions of women and men around the globe at the Women’s March. As a wheelchair user, I rolled in support of disability rights, women’s rights, LGBTQ rights, immigrant rights, Muslim rights, and racial justice. I rolled to be part of the resistance to defeat the Trump administration's bigotry and oppression.

While the march was a terrific experience, the belief that disability rights are separate from the women’s rights movement was apparent. On more than one occasion, fellow marchers thanked me and my disabled friends for being there. While I assume this was done with good intentions, I cannot help but wonder what their underlying reasons were.

Why wouldn’t I be at the March? I am both a woman and a disabled person. I am a member of two communities that are at risk under a Trump administration. I am doubly threatened.

I overheard two women in the restroom remark how “brave” it was for people in wheelchairs to be there, unaware I was present and overhearing their conversation.

Many marchers also yelled “wheelchairs coming through” while my friends and I were rolling. We continuously had to explain that we were simply marching, just as they were, and did not need anyone to move for us. While I realize this was done with good intentions, it did show to me just how far removed disabled people continue to be from the movement.

I overheard two women in the restroom remark how “brave” it was for people in wheelchairs to be there, unaware I was present and overhearing their conversation. I know this wasn't mean-spirited, but their comments made it clear that people with disabilities are still seen as child-like and in need of protection.

There were also practical issues. The March planned to provide several accessibility options, such as accessible seating, ASL interpreters, and sighted guides for blind people. Unfortunately, in the end, there were parts of the March that remained inaccessible to some in the disability community. As a wheelchair user, this meant being unable to get to the accessible seating section because there was no clear pathway.

The key to ensuring accessibility is building it into the foundation of the planning, rather than including it as something extra. In many instances, disability accessibility is an afterthought or perceived as an additional burden. This perpetuates the belief that people with disabilities are separate. For instance, instead of having separate tents where the disability community must go to access accommodations such as interpreters or guides, why not simply include these at the main information or guest services tent?

Accessibility must become a part of the normal planning process. Moreover, it is important to include people with disabilities in the planning at the outset, rather than invite us in after much of the event has already been planned. The disability community has taken to Twitter to discuss ways like these to make movements more accessible using the hashtag #AccessibleOrganizingMeans — and I suggest you check it out.

To be truly inclusive, disability rights must be included in the resistance’s platform and, more importantly, in the movement itself. Like other women, I have experienced barriers to adequate and accessible reproductive health care, and discrimination in the workplace. I have also contended with barriers to voting and difficulty obtaining accessible and affordable housing.

To be fair, many at the Women’s March did get that. Indeed, I was absolutely thrilled to see so many posters include disability rights. However, the understanding that we want to be part of the movement continues to be overlooked and not fully understood. Only a handful of the speakers actually mentioned disability rights as an issue at risk under the Trump Administration.

We must truly come together, understand one another’s issues, and fight for all of us. And please remember: one-in-four women in the United States has a disability. We are your mothers, daughters, sisters, partners, friends, and important members of society. We must be included and seen as vital to the movement. So, next time, don’t thank me. Instead, join me in the fight.