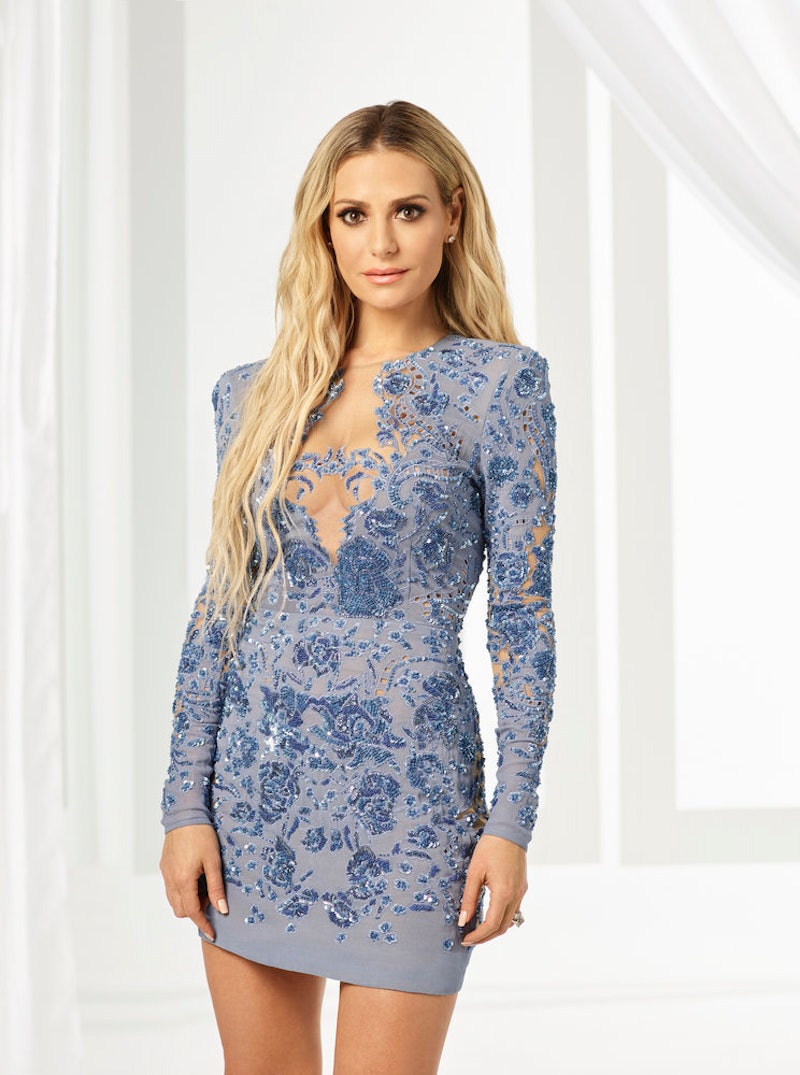 You guys, I was really trying to give new Beverly Hills Real Housewife Dorit Kemsley a chance. I was open to her because she is Lisa Vanderpump's bestie, and I was ready for some newbies to come in and shake things up on Real Housewives Of Beverly Hills. Dorit started off harmlessly enough, but, since last week, she has taken a turn for the bitter that has a lot of fans (including myself) raising an eyebrow. I simply can't support her absurd attack on Erika Girardi about whether or not she should be allowed to go sans underwear. Honestly, Dorit needs to stop talking about Erika's vagina.

The whole thing started last week when Erika, Dorit, her husband P.K., Kyle, LVP and Ken went to a party. Erika was wearing a beautiful, form-fitting dress and, like most of us would have, she went sans underwear so that her dress wouldn't have lines. Apparently, Dorit wasn't psyched that Erika had a human moment of not locking her legs into a vault-like state for the entirety of the evening because she could not stop talking about how "unladylike" Erika was to have skipped her undergarments. Because, you know, it's totally Dorit's business what Erika chooses to do with her own body. *Rolls eyes.*

The really disgusting part of this whole scenario began when Dorit and her husband basically had a private Erika-shaming party the next morning in their kitchen. There were so many unfortunate statements, I don't even know where to begin. Dorit literally said, "He's a man for crying out loud, I completely understand that P.K. could not stop staring at Erika's hooha." I'm sorry, what? Did you really just give your husband a pass for staring at a woman's inadvertently exposed body because "he's a man"? Then Dorit's husband responded by saying, "Maybe Erika's bits are available for the world." So rude.

I figured that was the worst of it, but Tuesday's episode just made things worse. Dorit made it a point to tell Lisa Rinna and Eileen about the whole situation for reasons that are beyond me at this point. She brought out the "If you are a lady, cross your legs" argument that she picked up somewhere in 1950 and Lisa Rinna became my new favorite housewife with a downright genius response.

Rinna also pointed out that this seems to be a case where Erika's bombshell look makes her an easy target for unfair judgement.

Did Dorit stop there? Nope. She went to see Kyle and again, she talked about Erika and her vagina. Like a broken record, she came in with another round of "P.K. couldn't help staring at Erika's vagina." I literally can't.

The whole thing came to a crescendo when Dorit told Erika in front of everyone that her husband couldn't stop staring at her "pretty little p*ssy." Erika was obviously uncomfortable and it was completely inappropriate. Dorit also accused Erika of flashing on purpose in front of the entire group and things got heated. Erika was not having it and said what everyone watching was thinking.

"Why do these b*tches keep talking about my f*cking vagina?"

Did anyone else just slow clap around your living for Queen Erika? She shut that down like a boss and Dorit was (finally) speechless.

Later when it got brought up at dinner, yet again, the ladies all started reasonably questioning why P.K. felt like it was appropriate to discuss some other woman's vagina. Dorit said one of the most disgusting things I have heard on this show. She said, "Sorry, sweetheart but you served it up on a platter, what are you expecting? Of course he's going to stare at it!" Can I echo Rinna's sentiments by saying, "Ew, ew, ewwwwww"?

Honestly, the whole thing gave me a really awful opinion of Dorit and her husband. They were so judgmental, backwards, and crude about Erika's slight wardrobe malfunction. Relentlessly shaming a fellow woman for something like that is so inappropriate. In the end, Erika is a boss and Dorit needs to go.