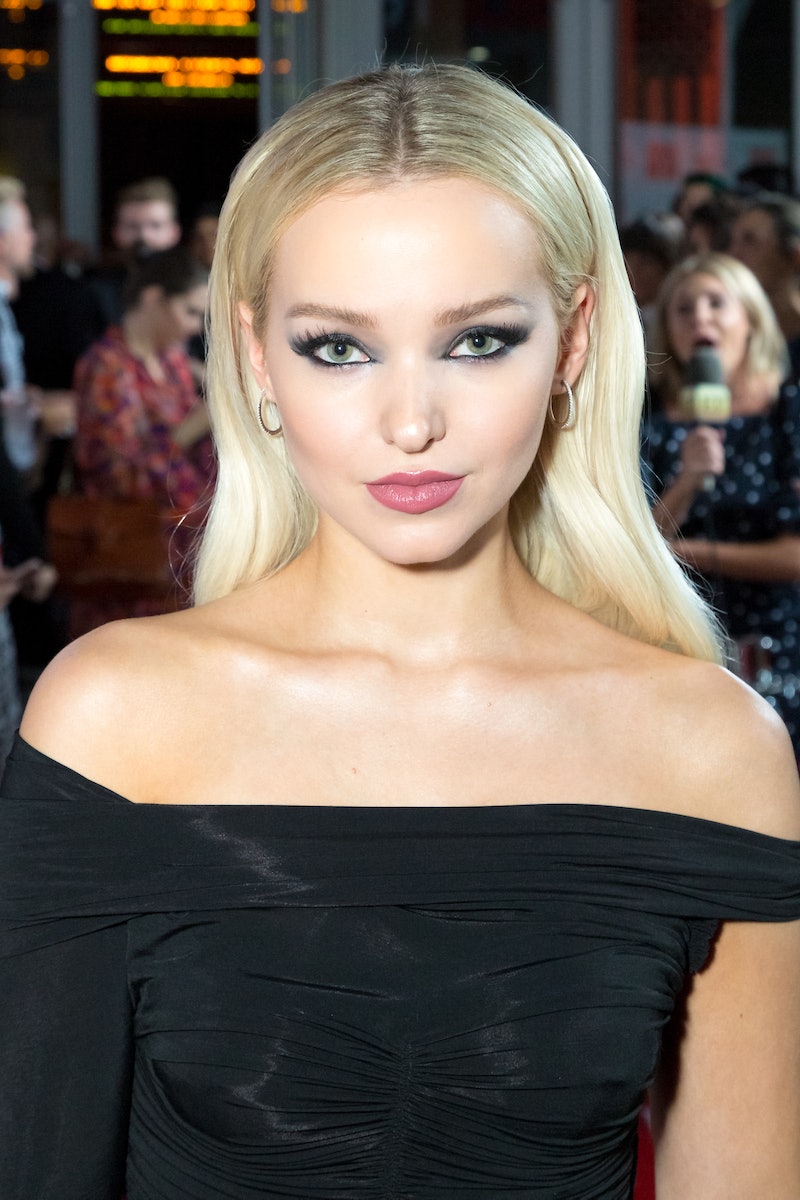 Dove Cameron's golden locks define many of the characters she has portrayed — Liv and Maddie Rooney of Disney Channel's Liv & Maddie, Cher Horowitz in the off-broadway musical version of Clueless, and Bekah in Netflix's Dumplin' all sport blonde crowns. Her role as Mal in The Descendants did give her a magenta mane, but Dove Cameron is now a brunette, which could be a fun change for whoever she plays in the future.

According to an Instagram post she shared revealing the drastic change, she wonders if she should've been a brown-haired girl all along. "Was I wrong to be blonde this whole time," she captioned the post.

She made the reveal with a short clip of her stylist making the finishing touches on the new 'do. It's obvious that she's totally feeling herself as she runs her fingers through the shiny chocolate strands. She ends the video with a cheesy grin and an over-lined kissy face, perfected with a shimmering nude gloss.

She also shared a video of her full outfit after getting her hair done. In it, she's wearing a bright red bodycon dress, and again, she's totally feeling her best. And she has every right, because she looks stunning. "My alter ego made me do this i’m not usually this person," she wrote.

Perhaps this sudden transformation is just that — an effort to channel the alter-ego that is prepared to move past childhood stardom and into the "real world" of celebrity. The darker hue admittedly makes her look older, more mature — but in the best way, of course.

The change comes with the publication of her Cosmopolitan feature in which she talks about feeling separated from the bubbly blonde people made of her on the outside. She was open and honest about her struggles with mental health, and discussed how she has tragically lost multiple important people in her life.

"A lot of people in my family, including myself, deal with some variety of mental health stuff," she told Cosmo. "I need a break. When you see enough, you start to get really freaked out. Like in an animalistic way, where you're like, 'Ah, oh my God, danger everywhere.'"

She just finished filming Descendants 3 and she told the publication she's ready for some time off before moving on to the next project. "This is going to sound silly, but if I've learned anything, in my nearly 23 years being on the planet, I need a little bit of time off, first," she said. "I am my best self, when I have been alone, and quiet."

Cameron also told Cosmo what she could about her upcoming endeavors. Clueless closes on Jan. 13, she's currently working on a "reboot that she can't announce just yet," which she called, "really weird," and next on her list are an unnamed rom-com and a trip to London for the West End production of Light in the Piazza. It's unclear which of those projects will boast her new look (or if any of them will), but it won't be long before the actor's signature blonde hair isn't so signature anymore.