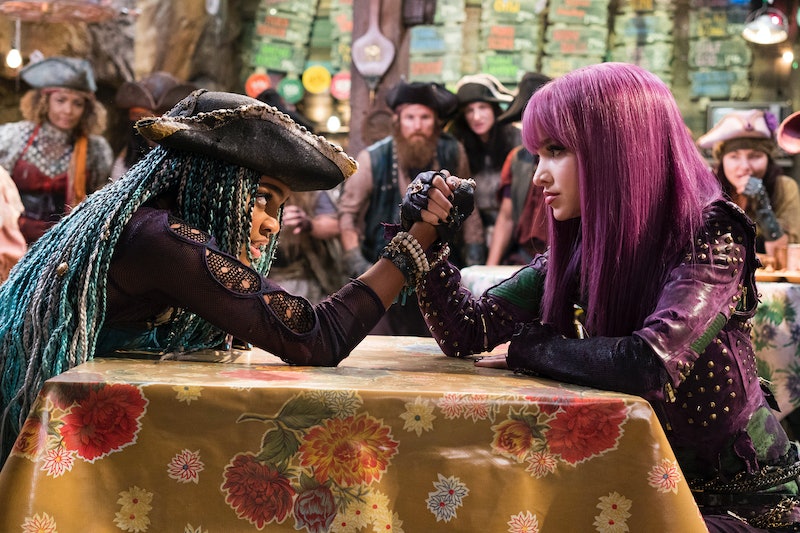 The Disney princess films of old tend to have one central feature in common: the damsel in distress. Sleeping Beauty pricks her finger and falls into a deep slumber, only able to be saved by true love's kiss. Ditto Snow White, though she's felled by a poison apple. Cinderella doesn't escape the clutches of her evil stepmother until Prince Charming finds her and slips on that shoe. But, although the new Disney Channel original film Descendants 2 draws inspiration from these classics, it differs in one significant way — it flips the damsel in distress plot on its head.

The sequel to the popular Disney Channel film Descendants, Descendants 2, which premieres July 21, continues the story of Mal (Dove Cameron), Evie (Sofia Carson), Carlos (Cameron Boyce), and Jay (BooBoo Stewart), the kids of Disney villains Maleficent, the Evil Queen, Cruella de Vil, and Jafar, respectively. After growing up on the Isle of the Lost, the destitute island where villains have been doomed to live in this magical world, the four kids are invited by Prince Ben (Mitchell Hope) to move to Auradon, the idyllic country that all princesses, sidekicks, and their broods inhabit. Descendants focused on whether these villain kids would continue their diabolic plotting at Auradon Prep or become "good". Spoiler alert: They choose good. This is still Disney, after all.

In Descendants 2, we find Mal, dating the now King Ben and struggling to maintain a "good girl" facade in anticipation of her transformation to a Lady of the Court. Overwhelmed by the patriarchal pressure to be ladylike, Mal ditches Ben and returns to the Isle, where she learns that her status as head villain has been threatened by Uma (newcomer China Anne McClain), the daughter of Ursula. When Ben and the rest of Mal's squad arrive to coax Mal back to Auradon, King Ben is quickly captured by Uma, and it's up to the villain kids to save him.

This may sound like the plot of another typical Disney film, but Descendants 2 feels revolutionary in its portrayal of nuanced female characters. For starters, the hero of the story, Mal, is anything but your average Disney princess. Even princesses who broke the mold, such as warrior-princess Mulan, were always characters driven by an innate goodness. Not so for Mal. When we first meet our protagonist, she is quite literally stealing candy from babies. In Descendants 2, Mal realizes that she can't just conform to what it means to be a "good girl", an identity that the residents of Auradon seem to value. The film allows her to occupy a nuanced space in between.

This fits nicely with the recent trend of placing compelling anti-heroes at the center of stories, from Breaking Bad to Mad Men. But in Descendants 2, there's one significant difference — this anti-hero is a woman. And, with some notable exceptions, there are precious few of those to be found. On top of that, this one is taking place in a Disney Channel Original Movie meant for a young audience.

Female anti-heroes are significant due to the challenge they pose to the antiquated notion that women and girls are the keepers of societal morality. Boys will be boys, but girls are responsible for dragging the opposite sex back to the side of the virtuous. After all, isn't it Belle who teaches the Beast how to be a good guy? By creating a protagonist who openly struggles to reconcile her villainous impulses with her newfound moral compass, Disney allows young girls to see that women aren't always perfect, or even always good.

If a woman is to be the complex anti-hero of Descendants 2, then it's only fitting that her adversary be a woman, too. Enter Uma, a villain scorned by her exclusion from the crew of kids chosen for the paradise of Auradon and determined to be a more notorious criminal than Mal ever was. Not only is Uma a fearsome female villain, she's also a woman unequivocally in command of a male-dominated crew. Her two sidekicks (Gil, son of Gaston, and Harry, son of Captain Hook) are oafish and unintelligent, relying on Uma to give the commands and following her orders without question. In one particularly striking scene, Uma and Mal attempt to negotiate the terms of Ben's release through a classic symbol of hyper-masculinity: armwrestling. It's clear that in this Disney world, whether in the realm of good or evil, girls are the ones in charge.

Female villains aren't new for Disney. In fact, a significant portion of the most loathsome fairytale antagonists have been women. But, unlike Maleficent or Ursula, Uma is not a one-dimensional antagonist, a character to despise without reservations. The film reveals that Uma is a villain in the same way that Mal is — both girls were raised by scheming mothers and adapted to the harsh environment of the Isle in order to survive. Yet, unlike Mal, Uma has never been given the opportunity to prove her "goodness" in Auradon. This pain is what drives her evil deeds. You sympathize with Uma's sense of injustice, and this detail removes her from the realm of caricature and grants her humanity.

Mal and Uma drive the plot, and are perpetually at the center of the story. When King Ben is captured by Uma, it is up to Mal to save him from walking the plank. A true love's kiss does make an appearance, but it's bestowed by a girl, not a dashing young prince. At every turn, these young women prove their worth as more than trophies for the saving — more often than not, they're doing the rescuing themselves.

These departures from the classic Disney fairytale plots are particularly salient when you consider that the film is reaching an audience comprised primarily of young girls. The first Descendants drew millions of viewers, kids who were likely influenced by the strong women they saw depicted on screen. Descendants 2 will show young girls that you don't have to be unwaveringly perfect to be the hero of a story. It will teach young boys that women can be in charge. It will prove that viewers can be just as compelled by a complex female villain as they are by a one-dimensional one. And it will demonstrate to young girls that women don't need saving, especially not by men. No damsels here.