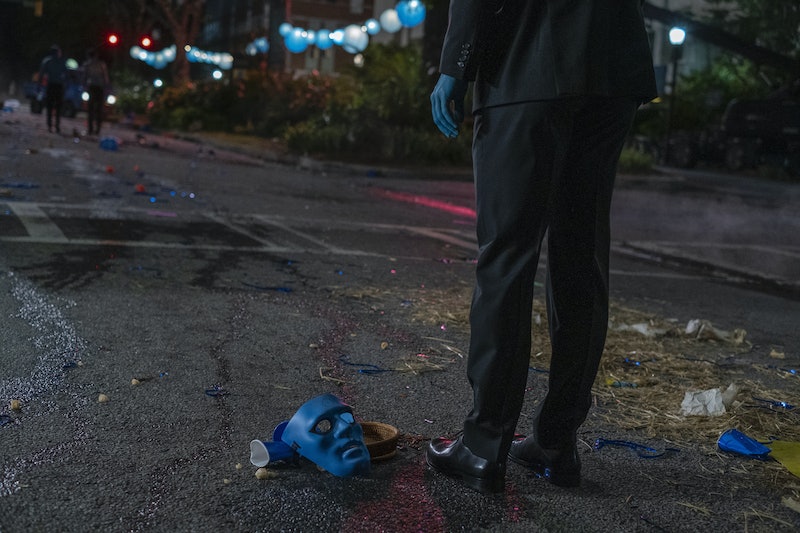 Spoilers ahead for Watchmen. Just one week after audiences learned the man formerly known as Jon Osterman had been masquerading in as Calvin Abar in Tulsa, Oklahoma, of all places, the super-powered godlike Dr. Manhattan might be dead on Watchmen. The cliffhanger of the HBO show's penultimate episode found him seemingly disintegrated by a device wielded by the 7th Kavalry — part of their master plan to create their own Dr. Manhattan (and presumably take over the world). But is Manhattan really dead? Could he have somehow survived that painful-looking zap? Can he even die in the traditional sense of the word?

The emotional hour, cleverly titled "A God Walks Into Abar," told the story of Cal and Angela's romance in non-linear fashion. Similar to the Manhattan-centric chapter of the original graphic novel by Alan Moore and Dave Gibbons, the episode did its best to simulate the way Manhattan himself views time — all at once — by skipping around the chronology of their relationship. Manhattan already knew on the night they met that things between him and Angela would end in tragedy after 10 years; the moment that made him fall in love with Angela didn't come until the very end, even though he'd loved her that whole time.

The tragedy that Jon/Manhattan/Cal knew would come after a decade with Angela was the attack by the 7th Kavalry. He knew that Angela wouldn't be able to save him, but that she would try anyway. He warned her that the terrorists wielded a "tachyonic cannon, which they will use to involuntarily teleport me and then destroy me." And they appeared to do just that in the final moments of the episode, sucking Dr. Manhattan up like blue bubble tea through a straw, transporting him to who knows where.

Given that Cal specifically said the 7th Kavalry would teleport "and then" destroy him, it's unlikely that the beam killed him. His disintegration was presumably just the teleportation, and he's now being held captive by the 7th Kavalry in some prison where they will try to destroy him once and for all. (Perhaps the same place they're holding Laurie Blake captive, the hideout Looking Glass has presumably infiltrated with that pilfered Rorschach mask?)

But even if Cal isn't dead yet, fans should still be worried: the first part of his prophecy came true, so surely the second will as well. But again, notice that he said destroy, not kill. Someone has tried to kill Manhattan before — and while they did succeed in temporarily destroying him, they didn't succeed in killing him.

In the final chapter of the original Watchmen, Ozymandias lured Manhattan into an intrinsic field subtractor and disintegrated him. (An intrinsic field generator is what turned Jon Osterman into Dr. Manhattan in the first place, so Adrian Veidt assumed a subtractor would reverse the process and destroy his nemesis.) However, while Manhattan's corporeal form was briefly disintegrated, he did manage to reassemble himself — just like he did the first time — and made a triumphant return.

Restructuring himself "was the first trick I learned," Manhattan reprimanded Veidt. "It didn't kill Osterman… Did you think it would kill me? I've walked across the sun. I've seen events so tiny and so fast they hardly can be said to have occurred at all. But you… you are a man. And this world's smartest man means no more to me than does its smartest termite."

Manhattan brings up a good point: can a being who can walk across the surface of a star and survive even be killed by a mortal man? And if Veidt, the world's smartest man, couldn't manage it… how could a gang of white supremacist hicks from Tulsa, Oklahoma hope to achieve what Ozymandias himself couldn't?

Then again, it should be taken into account that the 7th Kavalry is clearly being funded by somebody very powerful. They certainly didn't invent and manufacture that teleportation machine and intrinsic field device all on their own. Surely technology that advanced is beyond even the mind and means of their leader, Senator Joe Keene. Could somebody else be manipulating events behind the scenes? Veidt, returned at some point from his captivity on Europa, perhaps? Or Lady Trieu, manipulating the Kavalry with one hand while seeking to oppose them with the other, playing both sides of the conflict like Emperor Palpatine with the Republic and the Federation?

History and Manhattan's godlike abilities are on his side; it will be undeniably difficult to kill a being as powerful and seemingly immortal as him. But it's also possible that somebody has learned from the past, and finally come up with a way to murder a god. At the end of the graphic novel, Manhattan warned Veidt that "nothing ever ends." While the HBO show has confirmed how true that sentiment is, the finale may bring a sad and final end to at least one thing: Dr. Manhattan himself.