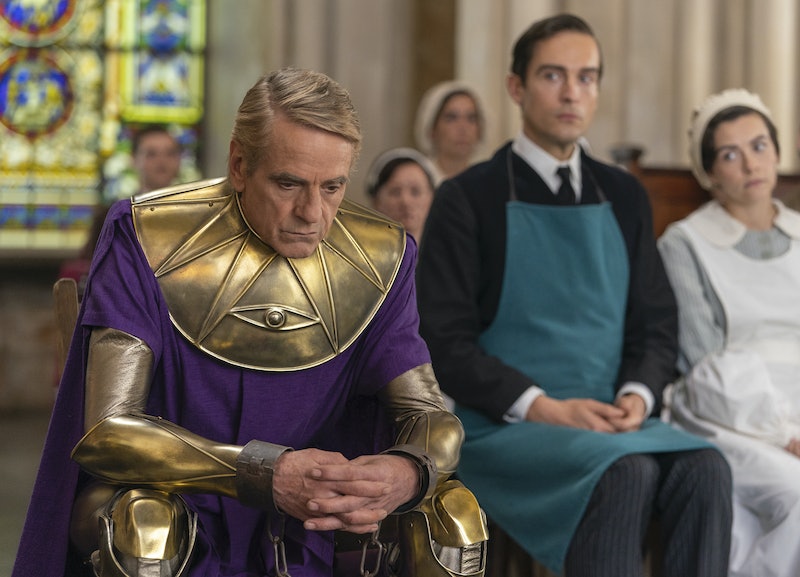 Spoilers ahead for HBO's Watchmen. Where in the worlds is Dr. Manhattan? That's been one of the questions that's been lingering over Damon Lindelof's "re-mix" of Alan Moore and Dave Gibbons' seminal 1987 graphic novel. The most powerful man in the universe has been nowhere to be seen… until now. The reveal that Cal is Dr. Manhattan on Watchmen likely came out of nowhere for many viewers, and will leave fans — both those well-versed in the source material and those new to the world — scrambling to make sense of this massive, game-changing twist.

Of course, the internet hive mind being what it is, this latest revelation didn't come out of nowhere for everyone; it's basically impossible these days to plan a plot twist without someone somewhere figuring it out, as Reddit user ksendor did based on little more than the pattern of wrinkles on the knuckles of actor Yahya Abdul-Mateen II. But it goes without saying that, unless you're in deep on Watchmen Reddit, you were likely blindsided by this bombshell.

But how is it even possible that Cal is Dr. Manhattan? Does that fit with what's known about the character, his abilities, and his timeline from the source material? In the graphic novel, Dr. Manhattan — or Jon Osterman, as he's known before his transformation — fled Germany in 1939 with his clockmaker father and his Jewish mother when he was a young boy. After being disintegrated by an intrinsic field generator and then reassembling himself as a glowing blue omnipotent godlike superbeing, he was recruited by the U.S. government to act as a one of their officially sanctioned costumed adventurers (along with The Comedian), and was given the name Dr. Manhattan to evoke connotations with the Manhattan Project.

Throughout his tenure, Manhattan defeated villains like Moloch and even won the Vietnam War. When Adrian Veidt (aka Ozymandias) came up with his plan to save the world by staging a fake alien attack, he knew he had to get the omniscient Manhattan out of the way; so he infected those closest to the superbeing — like Moloch and Jon's former girlfriend Janey — with cancer and blamed it on Manhattan. The ensuing public outcry led Manhattan to abandon Earth for Mars. Although Laurie Juspeczyk (aka Silk Spectre, now known as Agent Laurie Blake) managed to convince Manhattan to return to Earth to stop Veidt's plan, they arrived too late. The squid had already dropped and 3 million people were already dead.

In the wake of 11/2 and his own failure to prevent it, Manhattan abandoned Earth again, seemingly for good this time. He informed Veidt that he was going to attempt to create life of his own somewhere in the galaxy. When Veidt asked the omniscient being if his plan was going to work out in the end, Manhattan left his enemy with one ominous final warning: "Nothing ever ends."

The events of the Watchmen TV series show how true that statement is. Over three decades later, the events of the graphic novel are still having massive repercussions on the world… but where has Manhattan been during those intervening years and what's he been up to?

We know that Angela Abar was born in Saigon, Vietnam, in 1976, which means she would have been nine when the Extra-Dimensional Incursion event killed millions of people in New York and traumatized an entire generation. We know that Angela and Cal met while they were both living in Vietnam, although we don't know how old they were when they met or what year it was. We also know that they were living in Tulsa, Oklahoma, by Christmas Eve 2016, when the White Night took place.

That means that, at some point during the 31 years between 11/2 and the White Night, Manhattan arrived in Vietnam and disguised himself as Calvin Abar. In the interim, he also visited Mars, where he built and destroyed a castle, and he presumably built the prison on Europa where Adrian Veidt is being held. That's plenty of time for Manhattan to have abandoned his extraterrestrial activities and returned to Earth, met Angela, and fallen in love. (Or maybe he didn't even abandon his extraterrestrial activities: Dr. Manhattan can literally be in two places at once, after all.)

But is it even possible for Manhattan to have disguised himself as a regular man? It's been stated multiple times on the show that Manhattan can't pass himself off as a human… but why can't he? This is a being who can be in two places at once, grow and shrink in size, move things with his mind, view all of time at once, and explode things with a flick of his fingers. Why wouldn't he be able to look like a human if he wanted to?

The only "proof" we have that he's incapable of this is the word of two people: Angela, who said as much to Will when he claimed to be Dr. Manhattan during their first meeting, and Cal himself, who echoed the assertion when Angela repeated Will's claim to her husband. Now that we know Cal is Dr. Manhattan, it's clear that those assertions came from unreliable sources who had plenty to hide, and a vested interest in convincing people Manhattan couldn't possibly make himself look human.

Perhaps most important of all is the question of why Dr. Manhattan would want to disguise himself as a normal human, marry a Vietnamese police officer, and move to Tulsa. Given that Manhattan can observe all of time simultaneously, he must know what's going to happen and why Angela is important and why he needed to be in Oklahoma at this moment in time. But does he even remember?

While Angela clearly knew the secret identity of her hubby — taking a hammer to his head to literally crack open his skull and reveal the glowing blue man underneath — Cal seemed confused by her actions. Did Cal's "accident" that Angela referred to result in Manhattan losing his memories? Wiping out all knowledge of his past and his powers would certainly be one way to neutralize the threat of Manhattan for anyone planning a massive world-saving or world-ending event. Is Veidt or Lady Trieu or the Seventh Kavalry somehow responsible for his amnesia?

Given that the next (and penultimate) episode of Watchmen is titled "A God Walks Into Abar," it's likely that viewers are about to get a whole lot of answers to a whole lot of questions.

More like this
Everything To Know About 'And Just Like That...' Season 2
By Jack Irvin and Grace Wehniainen
These Brooke Davis Quotes From 'One Tree Hill' Will Never Get Old
By Sabienna Bowman and Jack Irvin
These Clues Suggest 'Velma' Season 2 May Be On The Way
By Grace Wehniainen
'The Last Of Us' Episode Schedule Competes With The Super Bowl & Oscars
By Brad Witter
Get Even More From Bustle — Sign Up For The Newsletter
From hair trends to relationship advice, our daily newsletter has everything you need to sound like a person who’s on TikTok, even if you aren’t.