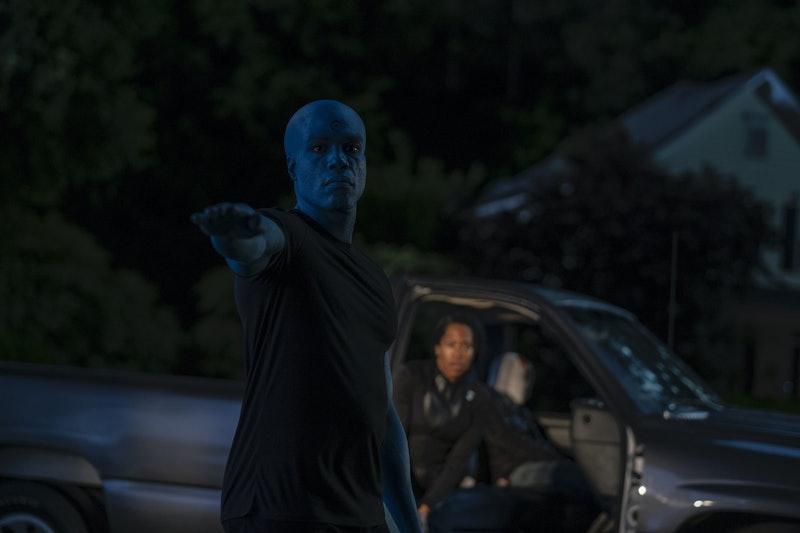 Spoilers for Watchmen Episode 8. Religious symbolism is an integral part to Doctor Manhattan's story and this is demonstrated most clearly in Watchmen's "A God Walks Into Abar" episode. Literally and metaphorically, Doctor Manhattan is a god, and Episode 8 explores how that's both a blessing and a curse for the great blue superman.

Doctor Manhattan's life is like one long religious reference to Christianity and the other monotheistic religions. A victim of a freak scientific accident, Jon Osterman dies and remakes himself into an omniscient and all-powerful being, who's capable of destroying and creating life, and who can see the past, present, and future all at once. He explains to Angela at the bar that after the events of the Watchmen comic in 1985, he abandoned humanity and built a new world on Europa, Jupiter's moon. He created a "verdant utopia" in just 90 seconds, and even grew "Adam and Eve," two humans made in the likeness of an English couple he met as a boy. They naturally adore him, but like a fickle god, he tires of their devotion, and so leaves them and returns to his own world.

This is an allegory to Christianity, but it can also be viewed as a criticism of any religion that believes in one true god, an idea that Watchmen writer Alan Moore was critical of. Though Moore admittedly has a pretty strange set of beliefs — he's a "magician" who worships Glycon, an ancient snake god — he's also deeply invested in the importance of individual spirituality. In The Mindscape of Alan Moore, Moore describes monotheism as a terrible simplification of that concept. He sees paganism, which preceded all monotheistic religions, as an "alphabet" and a "language," and that all their gods are "letters in that language" that "express nuance and shades of meaning." Moore believes that monotheism, in contrast, is "just one vowel," a primitive monkey sound. "With all this richness of spiritual concepts that are available, why reduce it to one plaintive, single note?" Moore explains.

Like any man, he's prone to spells of boredom, fickleness, regret, poor communication, and even lust. (Yes, we regret to report that Doctor Manhattan is a compendium of all our worst exes.)

Though Jon is likened to Christianity's god in both storytelling and imagery, the reality is he's more like a pagan god in practice. Lady Trieu tells Angela that people go into her phone booths to ask Doctor Manhattan for literally anything and everything, and he ignores all their prayers. It's not that he's uncaring — it's just that he's all too human, and though he has the powers of a god, he's not meant to be worshipped or reliably called upon for aid. Like any man, he's prone to spells of boredom, fickleness, regret, poor communication, and even lust. (Yes, we regret to report that Doctor Manhattan is a compendium of all our worst exes.) Angela asking Jon if he's like Zeus disguising himself as a goose to get laid is a more apt description of Doctor Manhattan than the famously selfless Jesus Christ is.

This could be read as a further criticism of monotheistic gods: Doctor Manhattan created life and then left his creations to survive, or not, on their own. He's present yet removed, and cries for help even in the face of catastrophe — like a world war, or a giant engineered squid — go unanswered. Why worship just one figure who pays you no mind, and who may not even be listening?

But Jon's portrayal can also read as a call for a more nuanced, humanized view of god and spirituality, too. Jon tells Angela that because he experiences time all at once, he's always terrified, sad, in love, and heartbroken. He's made mistakes — like his actions during the Vietnam War, and his attraction to a 16-year-old Silk Spectre — and done things in the name of a selfish, but understandable, desire for human connection. These are what make Jon so human.

Though he's tragically, laughably bad as an omniscient being that people want to worship, he's the perfect image of a pagan god, who's just as messy and lost as the rest of the humans. Jon gets bored of his creations worshipping him because he doesn't want to be unquestionably loved: he desires a real relationship, with fights, and heartbreak, fiery passion, and a deeper, more tangible love.

The writing of Jon in "A God Walks Into Abar" both breaks Jon down and builds him up, and the result is a more sympathetic and relatable portrayal of the meta-human. Doctor Manhattan may functionally be a god, but he's human in all the ways that matter.