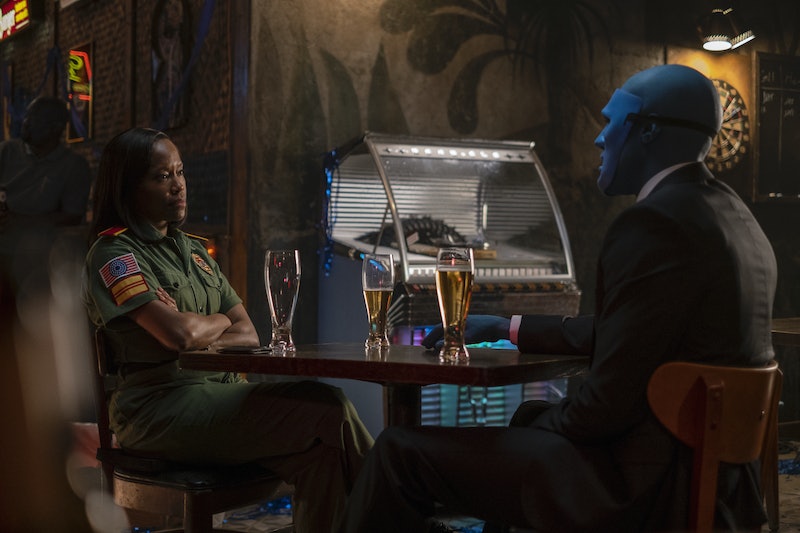 Spoilers for Watchmen Episode 8. They say that love is one of the most powerful forces in the universe, and that holds true even for gods. In Watchmen's "A God Walks Into Abar," we learn that the metahuman Doctor Manhattan (aka Jon Osterman) has been living on Earth for the past ten years, disguised as Angela Abar's (Regina King) mild-mannered husband Cal (Yahya Abdul-Mateen II). Doctor Manhattan and Angela's love story bookends the entire episode — and really, the entire series — but as Jon himself predicts, it's a tender romance doomed from the start.

At the end of Episode 8, the 7th Kavalry shows up at Angela's house, and despite her best efforts, succeed in destroying (or at least teleporting) Doctor Manhattan. It's a devastating end to their relationship, and it's not yet clear if this is the last we'll ever see of Doctor Manhattan.

Bustle talked to Yahya Abdul-Mateen II, the man who brought Doctor Manhattan to life, to discuss his Watchmen role further, "birthday suit", as he puts it, and all.

So is this the last time we'll see you? Is Doctor Manhattan really gone?

But the blue guy we have to say goodbye to?!

A-M: [laughs] I think that's tiptoeing it too far into spoiler territory. I'm so sorry I don't have a better answer for you.

Understood! Can you talk about the challenges of being Doctor Manhattan and filming this episode, in terms of the makeup, CGI, and what he wears, or more often, doesn't wear?

A-M: First, it's an overall acting challenge: the character, the voice, the personality. Jon has a limited, very specific emotional range. His modes of communication all present challenges on their own.

In terms of the physical, the birthday suit part of it was the most liberating part about playing Doctor Manhattan. I got to get in shape, play in a different space. That's where I got to investigate the idea of him being a person who's above notions of shame and identity. It was a really, really liberating process.

In terms of the makeup, it took about three hours in the beginning to get ready, spraying me with white egg shell paint and then covering that in layers and layers of blue, and then the bald cap and things like that. Regina joked that I smelled like apple — the paint smells like apple. It was definitely a complicated process, but one that I think was the most rewarding in the end.

In the episode, the camera purposely avoids showing Jon's face, and his voice is totally different from Cal's. How did you come up with that voice, and then his affectations, like when he taps the table when he talks?

A-M: I wanted him to be a character who was hyper-intelligent, and who sounded different from myself. I looked up Christopher Reeves first actually, just to hear someone who's played Superman, but that didn't really work so well with me. When I tried to live in that space, it sounded too much like my own self. So I looked for guys with higher-pitched tones, and I landed on Steve Jobs, the Dean of the Yale School of Drama, James Bundy, and also Damon Lindelof — who doesn't really have a higher-pitched tone, but these were people who I thought were hyper-intelligent, and who spoke in a very specific way. Then I sort of blended their voices and ended up with the character we presented at the bar.

Those bar scenes were fun, but they also required a lot of patience. We shot it in a very technical way because we couldn't show my face in those moments, and so I had to be very specific in my movements, in my hand articulation, and with my vocal articulation to make sure that it wasn't just a scene of Regina at the bar, but a two character scene.

I know that Lindelof did this interview with The Hollywood Reporter about how Angela is the sun that all the characters orbit around. What does it mean for you that you play this almighty being who can do anything, but at the end of the day he chooses to be the heroine's love interest?

A-M: We learn so much about Angela's history, and it's very traumatic. She has trauma that's been passed down from generation to generation and it all lands in her lap. They're sort of perfect for each other in the moment that they find each other, because he is a god that is longing to feel human again, and to feel human touch again after isolating himself from humanity. I believe that he comes back in order to feel what it's like to be human again.

And she's a person who history has told her that it's not safe to feel and experience love. And so their relationship is one that begins with that negotiation: with someone who wants to feel human and another person who feels it's too dangerous to experience love. So I think that they complement one another well because they bring those unmet needs out of each other.

I was very happy that with all of the historical drama, the narrative about white supremacy, about identity and masked vigilantes, that Watchmen is ultimately a story about love, once we really follow Angela's journey. It's refreshing and surprising.

It's hard not to think of Laurie here, because viewers see that she still pines for Jon. Do you think that this is Jon making up for the mistakes he made in his last relationship, or does he not think of Laurie at all?

A-M: I can see how people would say that Doctor Manhattan is cold, because I think he would say, "It just is what it is." His experience with Laurie happened, but it's what he's still experiencing right now. He would likely say that he's still experiencing the love, the pain, the anguish, the hurt, and the highs and lows of that relationship. He's always experiencing that. So he has not gotten over Laurie, because he's going through it right now. I think that's how he would understand that.

I don't think that this [relationship with Angela] is an apology, or was influenced by his past [mistakes]. I think he's a guy who does what he has to do because it's inevitable.

Did you feel nervous about portraying such an iconic character, knowing that the reveal would shock, and maybe even upset, some old school fans?

A-M: [laughs] Nah, not at all. I read something the other day online that was like, well if you're upset about Watchmen, Doctor Manhattan, Hooded Justice, Angela Abar...if our protagonists in this story upset you, then who are you in our story? The answer is you're probably like our antagonists. So, I'm not worried about people who identify with the antagonists in our story.

I think that, more than that, I'm really excited to bring this narrative and this identity of a black Doctor Manhattan, or rather Doctor Manhattan manifested in the body of a black man. I'm excited about bringing that imagery to the people who can accept it, and who are inspired by seeing that imagery on TV and by that part of the narrative. There's a whole lot of people out there who are really gravitating to our story and celebrating it and I'm really happy that we can offer that to them.

More like this
ITV's 'Maternal' Was Inspired By A Very Simple – & Unanswerable – Question
By Maxine Harrison
'The Queen’s Gambit' Season 2 Tweet Wasn’t From Anya Taylor-Joy
By Mary Kate McGrath, Jack Irvin and Grace Wehniainen
Linda Ronstadt’s “Long Long Time” Plays A Pivotal Role In The Last Of Us
By Brad Witter
Michael B. Jordan Tackled His "Public Breakup" With Lori Harvey On 'SNL'
By Brad Witter
Get Even More From Bustle — Sign Up For The Newsletter
From hair trends to relationship advice, our daily newsletter has everything you need to sound like a person who’s on TikTok, even if you aren’t.