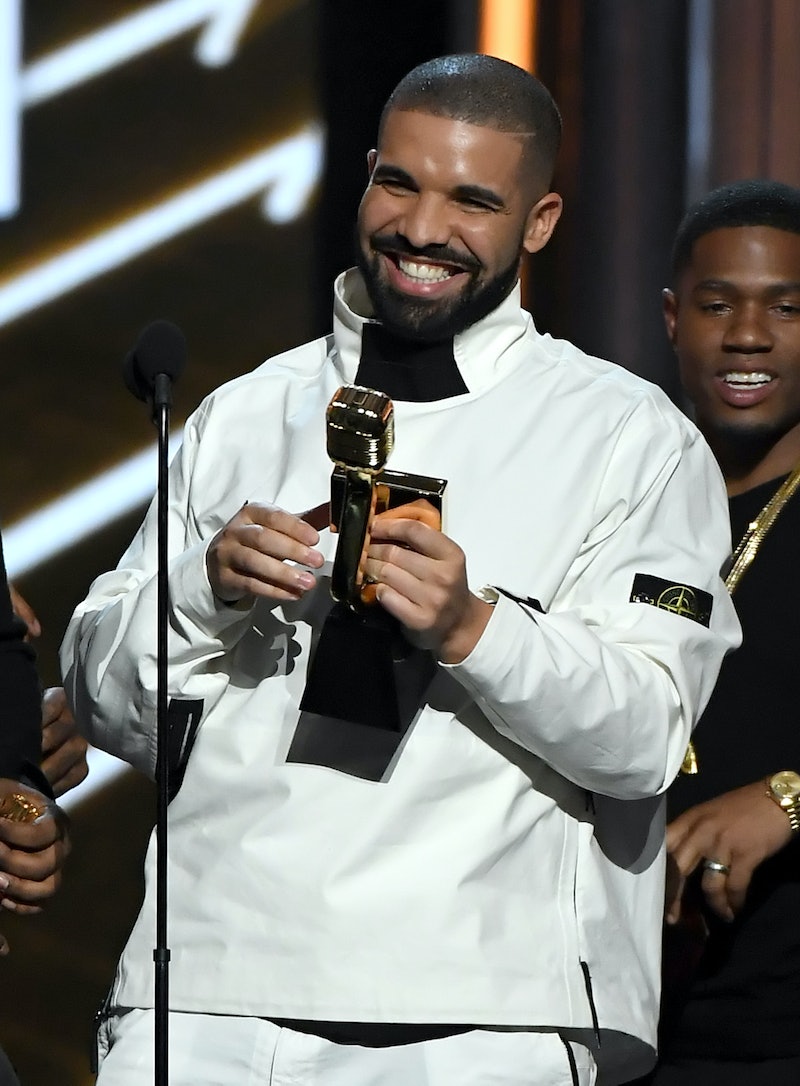 A blast from Drake's past may shed a new light on one of the most talked about tracks off of his album Scorpion. On one song, "Don't Matter To Me," the rapper actually features the late King of Pop. Interestingly enough, Drake channeled Michael Jackson on Degrassi back when he was just making a name for himself on the Canadian teen drama. And you need to see his fun turn as the icon.

During its heyday, Degrassi was all about being entertaining while dealing with some of the issues affecting teens everywhere. In the 2002 episode titled "Girls Just Wanna Have Fun," Drake, who portrayed the character Jimmy, dressed as the singer during an '80s-themed dance at Degrassi High in full "Thriller" flair. He pulled out all the stops in this get-up in order to win a dance competition (as he was competing against his friend Spinner).

While he had Jackson's moves down, since this is Degrassi here, things don't exactly go smoothly throughout his turn as the pop star. When he bent down during his performance, he experienced a rather embarrassing wardrobe malfunction: He ripped his pants! Like high schoolers are bound to do, all of the onlookers broke into hysterics which caused Drake, er, Jimmy to leave the scene. Before the awkward moment went down though, the "Nice For What" singer really put on his very best Jackson impression. It's especially fun to look back on the episode now considering that Drake has his own sort of collaboration with the late singer on his album.

Shortly before Drake even released Scorpion, he surprised his fans with a preview of the album's tracklist. And, it's safe to say that one song in particular got a lot of people talking. His song, "Don't Matter To Me" actually features Jackson on it — literally.

While the "Billie Jean" singer passed away in 2009, Drake still, surprisingly, managed to collab with him on one of his unreleased tracks, as TMZ noted. The song samples some vocals from one of said tracks as a hook for "Don't Matter To Me." So, yes, technically Drake is collaborating with the late singer. If that wasn't wild enough, thanks to his appearance on Degrassi, this isn't even the first time that the rapper has had a fun connection to the King of Pop.

Before Drake became one of the biggest figures in music, he got his start on the Canadian drama back in 2001. According to his IMDb page, he was on the show for 145 episodes from 2001 to 2009. Shortly after he left the series, he released his first studio album, Thank Me Later, in 2010, per Billboard. Ever since he transitioned into the music industry, he's been a dominant force, earning over 35 Grammy nominations (with three wins) and earning five #1 hits on the Billboard Hot 100 chart.

His Degrassi roots were on full display in a music video for another one of his Scorpion tracks, "I'm Upset." Drake basically broke the internet with his surprise music video, which featured a Degrassi reunion with almost every member of his cast. The music video, which was released on June 13, caused fans everywhere to go wild. Wouldn't you if all of your old faves were back together courtesy of an amazing Drake track?

Thanks to a couple of tracks, with their ties back to the singer's Degrassi roots, Scorpion seems as though its off to a roaring success. Now, all Drake needs to do, if he wanted to make a "Don't Matter To Me" music video, is to include some of his greatest "Thriller" dance moves to make things truly come full circle.