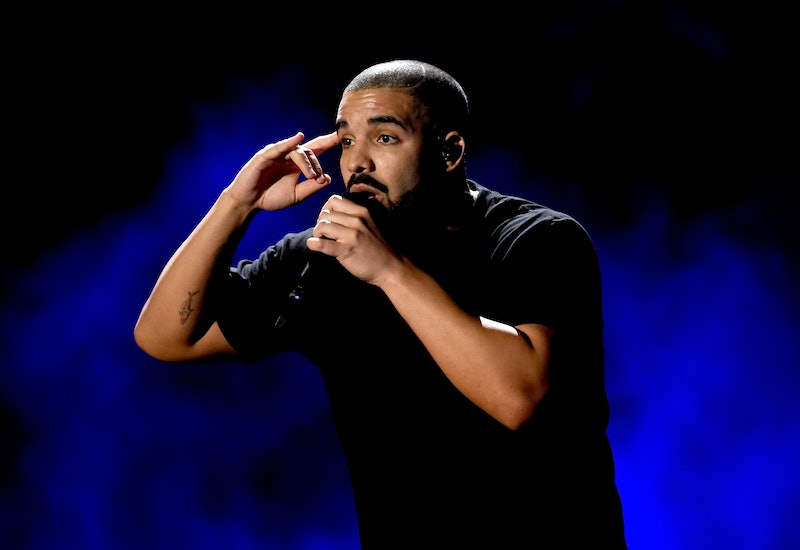 When your dad is one of the biggest rappers right now, what on earth do you get him for Christmas? Some stylish clothes? Nah, he's got plenty. A fancy new watch? Nope, he's got a few of those, too. Well, Drake's Christmas gift from his son Adonis was a priceless piece of original artwork, according to a photo the rapper recently posted to Instagram, and the artist's identity will probably surprise you.

So, who is this soon-to-be well-known artist, you ask? None other than little Adonis himself. Yes, you read that correctly. Drake's 1-year-old son produced a masterpiece of epic proportions, and it seems as if he's inherited a good deal of creativity from his dad.

Adonis opted to dip his hands in various colors of paint for his latest piece, which could very well end up being his signature style from here on out. The prints of his hands were primarily done in blue, with splattering of prints in green, red, and yellow as well. The whole thing set against a simple white background, and included a coordinating simple white frame.

"Adonis > Picasso don’t @ me," the rapper captioned the photo of his son's gift, followed by a blue heart and Christmas tree emoji. Don't worry, Drake. No "@"-ing needed. Adonis clearly has talent for miles.

Back in May 2017, rumors started to surface that Drake had fathered a child with a woman named Sophie Brussaux. "If it is Drake's child, which he doesn't believe it is," a rep for the rapper told E! News at the time, "then he would do the right thing by the child."

Flash-forward almost two months later, and Drake decidedly changed his tune. In response to Pusha-T's late-May diss track, "The Story of Adidon" — which suggested that the paternity allegations against the former Degrassi star were, in fact, true — Drake confirmed the rumors himself on his new album, Scorpion.

There were several tracks that made reference to his son, but the lyrics in "Emotionless" seemingly confronted the rumors head-on. "I wasn't hiding my kid from the world, I was hiding the world from my kid," he rapped.

Since then, Drake has occasionally opened up about his son to the press. During an episode of HBO's The Shop back in October 2017 (as reported by People), the 32-year-old confessed that he was "excited" about being a father, and was looking forward to teaching his son "all of the things I’ve learned from and through my father and the incredible things I’ve learned through my mother about patience, about unconditional love."

Drake also took that opportunity to tout the tot's good looks and athleticism. "[He has] crazy blue eyes — baby blue eyes," he said on the show, according to People. "He’s already in the pool shooting the basketball."

So, you're telling us that — at barely over the age of 1 — Adonis is handsome, sporty, *and* an artist of Picasso-esque proportions? Sounds like he's probably going to be a heartbreaker like his famous dad, too.