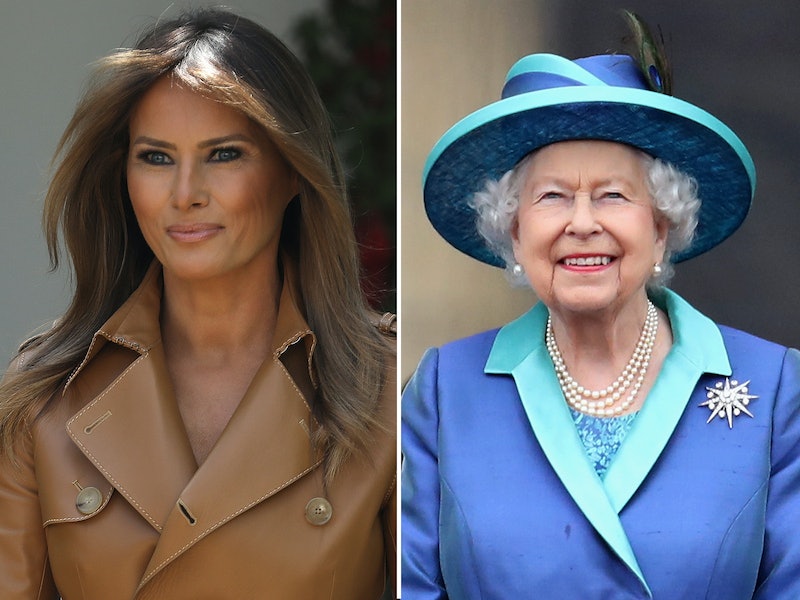 The president and first lady's trip to the United Kingdom later this month will include a visit with the longest-reigning British monarch. While there's no official dress code for Melania Trump's meeting with Queen Elizabeth, anyone meeting a member of the royal family is expected to wear an outfit that fits the occasion. The rule of thumb: a first lady should never upstage the queen.

The Trumps will arrive in the U.K. on Thursday, and then are scheduled to meet the queen for tea at Windsor Castle on Friday. Robert Wood Johnson, U.S. Ambassador to the U.K., told Sky News that the president "has to see the head of state. Putting his foot on the ground of British soil, it's job one — very, very important, very symbolic."

As for what the first lady will wear, it'll likely be pretty formal. Former First Lady Michelle Obama was criticized for wearing a sweater to lunch with Queen Elizabeth in 2009. "You don't go to Buckingham Palace in a sweater," Oscar de la Renta told WWD, referencing the J. Crew sweater Obama wore in the presence of her royal highness.

Obama's other outfits were more refined, though she didn't always wear a formal gown. The main focus is typically on the designer a first lady chooses to wear when meeting a foreign leader — specifically, which American designer they wear. Trump would break with tradition if she met the queen while wearing a foreign label.

If the heads of state were meeting over lunch, like Obama's 2009 visit, Trump could wear a more business casual dress that falls below the knee. If it were an evening event, she'd be likely to wear a full-length gown, like the one former First Lady Nancy Reagan wore during Queen Elizabeth's first trip to the United States' West Coast in 1983. Given that they're meeting over tea this time around, the first lady's outfit will probably be more on the business casual dress side of that spectrum.

But with no exact dress code in place, the main objective is to show respect to the monarch — which includes not overshadowing her outfit. When Obama wore a white Tom Ford gown in 2011, fashion insiders noted that it didn't distract from the queen's white gown.

"The thing that's cool about Mrs. Obama's white, which the queen tends to wear at events like this, is that she doesn't compete... It's a form-fitting gown but there's no decollete, it's very respectful and tasteful, yet it's very striking," InStyle fashion director Hal Rubenstein told the Associated Press.

There are far more rules dictating how to act around the queen than how to dress. It's customary for women to give a small curtsy and address the queen as "Your Majesty" upon first greeting. From that point forward, everyone is supposed to call her "Ma'am," pronounced like "jam," never referring to the queen by her first name.

Obama actually made another small blunder when greeting the queen in 2009. The former first lady gave her royal highness a hug, despite the fact that no is supposed to touch the queen and only shake her hand when she offers it. Although Queen Elizabeth simply breezed past the snafu and hugged Obama back, the British media pointed out that it wasn't typical royal behavior. "The move is a departure from what is considered appropriate protocol when meeting the Queen," The Telegraph wrote at the time.

So how the first lady acts around the British monarch will be much more important than whatever sartorial choices she makes. Nevertheless, the world will be watching to see how Trump dresses throughout her visit to the U.K., as what she wears is often interpreted as a political statement in itself.