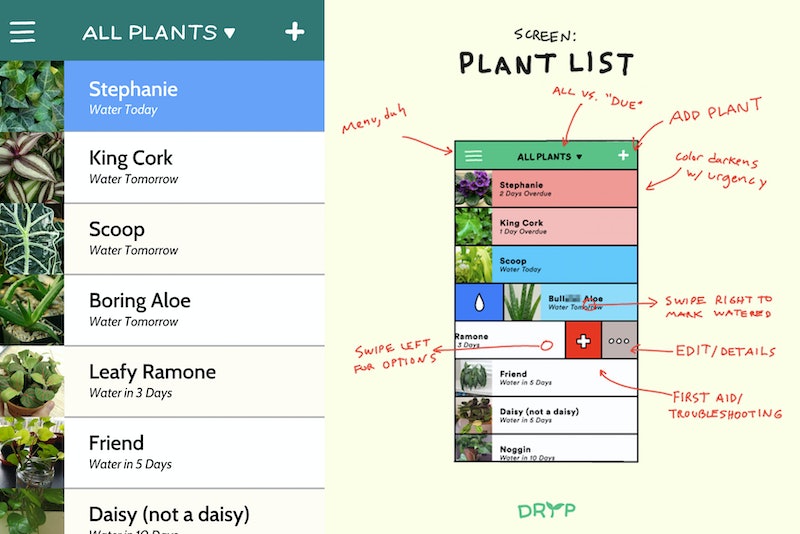 I have a confession to make: I have killed every plant I have ever brought into my apartment. In fact, I'm such a bad plant parent that I've given up on plants altogether. Same? Then this DRYP plant watering app is the Kickstarter campaign you're going to want to support. When it's launched, it will take the guess work out of keeping plants alive, and may even help you nurse sick plants back to life.

"It’s sad to me when people give up on themselves as plant caretakers," DRYP creator Ben Kling tells Bustle. "You buy a little plant aspirationally [sic], thinking 'I’m gonna be the kind of person who has plants!' and then it rejects your love, so you feel like it’s just not in the cards for you."

If you can relate, this app that keeps plants healthy and happy is totally going to be your jam: It will send you notifications when each species of plant in your home needs water, sun, etc. Mind blown. Kling, who says he is the proud parent of around 70 plants, says the the most common question other plant parents ask him is how much they should be watering their plants babies. "The truth is it’s really hard to tell sometimes," he says. "If you overwater and your roots rot, the plant won’t actually absorb any moisture and show symptoms of dehydration. Sometimes you just need to stick a finger in the soil and see if it smells like basement."

Like an Italian grandmother who wants to feed you every time she sees you even though you've just eaten, Kling admits to giving some of his plants more water than they need. "I’m high-effort high-attention with my plants; I check in all the time. So I’ve learned that I just can’t have succulents, for example, because I’ll just be like 'are you suuuuuuure you’re good?' every day for four days and then just cave and water them, even though I know I shouldn’t," Kling says. "In order for me to stop that I have to literally forget I own them, and then they desiccate into little raisins."

With the benefits of living with plants well documented, DRYP will allow former plant killers to reap the benefits of tending to a plant. "As of now, the plant care info is all buried inside paragraphs of filler text on sites called home-garden-answers-info-magazine.net," says Kling, pointing to the need for a simple, user-friendly plant care resource. The app will address common problems like root rot, under-watering, sunburn, mealybugs, and spider mites as well as issues newbie plant parents are less likely to know about like nitrogen deficiencies and salt buildup.

If you're thinking of ordering some plants from the Amazon Plant Store right freakin' now, slow your roll because the first iteration of the app (for iOS) won't be available until December, Kling says. However, this means you can get yourself some plants for the holidays to get you through those dark winter months, and the feeling of accomplishment you'll glean from your new plant babies will definitely give you all the warm-and-fuzzy feels.

"There’s so much beautiful Pinterest-y plant photography but it’s all paired with completely unattainable interiors and absolute oceans of natural light," Kling says. "I want people to know that you can have vines tumbling around in your normal-person home!" So, if you're a normal person who has long shunned plants because they don't seem to return your feelings, you can now begin repairing your relationship with plants.

You can contribute to DRYP on Kickstarter until Sept. 29. Seriously, let's band together to make this a reality because this app is total plant-parent goals. Not only will it get rid of plant FOMO once and for all, it also makes a good case for Kling secretly being Santa Claus because this just-in-time-for-the holidays plant app is the best gift you'll give yourself all year.