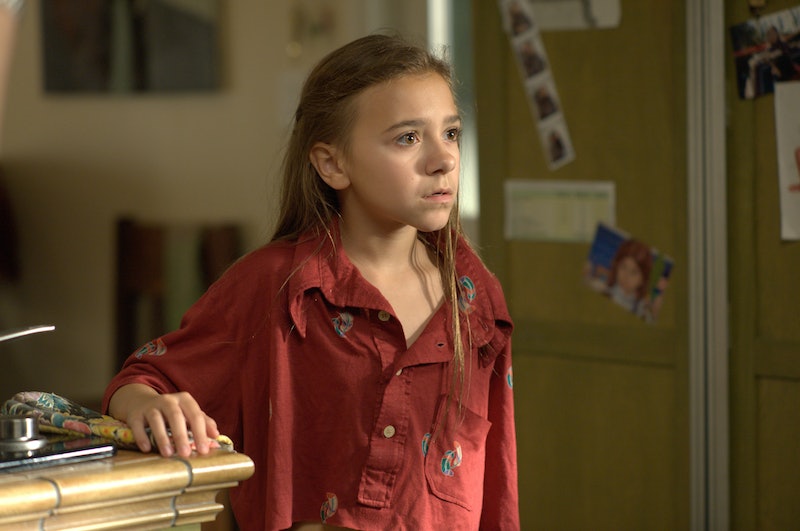 Spoilers ahead for Better Things Season 3, Episode 10. This week on Better Things, Duke (Olivia Edward) silently makes a PB&J, sprinkles her grandpa's ashes onto the sandwich, and eats it. It's disgusting and bizarre, yes, but it's also sweet and signals an attempt to connect with her deceased grandfather. Duke learned about death on Better Things and is now trying to process what it all means. And even though she does so in an incredibly literal way, it comes from a sincere place.

While no one is close to the grave at the moment, death still loomed over May 2's "Show Me the Magic." Sam is nearly the age her father was when he died, and she and her friends let loose at the beginning of the episode, swapping menopause tips and complaining that they've become invisible.

Duke hasn't really conceptualized death until this episode. She's seen visions of her grandpa, Sam's father, before, but this time it feels much more real. When she races downstairs to tell Sam and Frankie that she saw her grandpa, she insists that they come up and see for themselves. "Grandpa was sitting right there in a brown suit, and he asked me what was up with my friend Django's mom." Frankie responds, saying, "Dude, that's a big butt print. Duke couldn't have made that."

Sam also sees her father, Murray Fox (Adam Kulbersh), which she receives with a mixture of acceptance and annoyance. It should be noted that he's always wearing a brown suit when audiences see him, so it's likely that Duke is telling the truth. However, later we realize that she doesn't really understand what happened to her grandpa.

Sam pulls out some of her dad's comics to show Duke, and they have a conversation about who Murray Fox was. Her daughter responds, "Did your dad leave you when you were little, too?" Sam answers that her dad died of a heart attack, reminding Duke that they've talked about this before. However, it's clear that it hasn't really sunk in Sam's youngest. And while it's been a long time since Murray died, Sam tells Duke that she still misses him sometimes — "I miss him today," she says. Later, Duke learns that Phil keeps her husband's ashes at the foot of her bed.

Death has been a fairly constant theme in Better Things. For one, it's clear that Phil's mental health is deteriorating. Back in Season 2, she threw herself into a manhole after getting caught shoplifting from the museum she worked at, and in Season 3, she was forced to surrender her car keys after hitting Duke with her car. This also calls to mind Sam's wake from Season 2, where both she and Duke lay side-by-side, pretending to be dead, while everyone said nice things about them. While Sam didn't want to die, per se, she wanted to reap all of the benefits.

Then there's Sam herself, who — especially this season — has been struggling with the aging process and all that that entails. And while she's been going to therapy (kind of), she likely isn't talking about anything deep with Dr. Miller, who she's now sleeping with. But that she's nearly the age her father was when he died is certainly having a psychological impact on her.

And while Duke is at Phil's, literally eating her grandfather, Sam is devastated to discover that Duke's pet rodent, Mandie Patinkin, has kicked the bucket. She sobs hysterically over the little creature before flushing it down her powerful new toilet. And although we don't get to see how Duke responds to Mandie's death, it's likely going to be another difficult conversation.