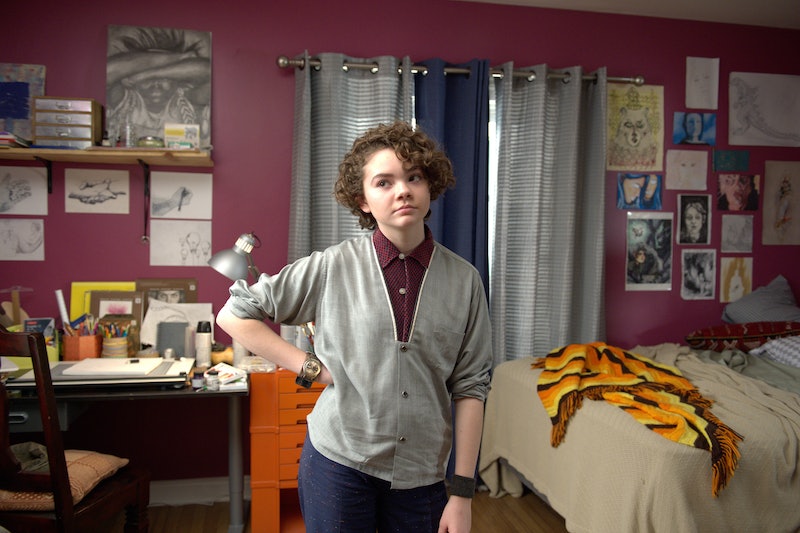 Spoilers ahead for Better Things Season 3, Episode 7, "Toilet." If there's anything worse than prepping for a colonoscopy, it's likely prepping for a colonoscopy on Mother's Day, while your middle daughter is being a brat. On the April 11 episode of Better Things, Frankie (Hannah Alligood) is in a mood and takes it out on Sam. This behavior is contrasted against Sam's other daughters, Duke and Max, who each want something different from her.

The opening scene is a familiar one to any parent — Frankie completely ignores Sam's questions upon entering the kitchen, freaks out about everyone's recycling habits, leaves the room, then brazenly asks for spending money. Sam demands an apology, to which Frankie slams the bedroom door, which becomes stuck in its frame. Even after Fox calls the fire department to free her daughter, Frankie neither apologies nor says thank you. Teenagers!

If that weren't enough for Sam to deal with, she has to prep for her colonoscopy, and the prescribed laxative keeps her glued to the toilet with a torrential flood of "caca," as she calls it. Fortunately, Duke hasn't quite gotten to that irritable age (although she's certainly getting there) and is deeply concerned by her mom's sudden and prolonged trips to the bathroom. She sweetly inquires after her mom from outside the door, leaving her extra toilet paper just in case it's needed.

Duke is likely too young to know what a colonoscopy is (and it doesn't seem like Sam explained the unpleasant procedure to her), but that she still likes spending time with her mom and wants to take care of her is a very sweet and telling sign of where she's at, developmentally. However, audiences may recall that Duke just got her period in the last episode, so puberty isn't far away for her, either. This, contrasted against Frankie's blow-up earlier that day, reveals that although Sam's youngest dotes on her mom now, a similar, hormonal irritability is in her near future.

Then there's Sam's oldest, Max, who sends her mom a barrage of texts about an apartment in Hollywood while she's in the middle of her procedure. It's unclear whether Max doesn't know about Sam's colonoscopy or doesn't care, but her urgent texts demand a deposit STAT. It's interesting to see all three daughters' behaviors, compared side-by-side. So while Max demands money, Duke wants attention, and Frankie just wants to be left the hell alone. And so it goes.

The relationship between mothers and daughters are complicated, to say the least — just look at Sam and Phil. And while Fox's children are headstrong (a trait that she's likely proud of), that also means there's bound to be conflict when they don't see eye-to-eye. "Sometimes I think that having a 12-year-old daughter is a bit like holding a hand grenade with the pin half-out," columnist Barbara Ellen wrote in the Guardian back in 2004. "Most mothers with a daughter on the cusp of teenage would recognise [sic] this feeling — the little tickle of dread at the explosions to come during the Peak Teen period of 13 to 17. In psychological circles, it's a well-documented fact there are more fights between mothers and teenage daughters than any other group." And since Frankie is just starting out those emotional teenage years, Sam's relationship with her daughter has become even more complicated as a result.

In 2015, author Deborah Tannen — who wrote the book You're Wearing That? Understanding Mothers and Daughters in Conversation — told Vox that women are now closer with their mothers, with some even going so far as to say they're best friends. And while that could be seen as a positive thing, that also means there's bound to be more conflict than ever before. "Because they talk to each other more, and talk to each other about more personal things, there are more opportunities to say the wrong thing," Tannen told the site. "Because you're so close, there's more opportunity to get on one another's nerves."

Just like every other family, Sam and her daughters certainly get on each others nerves, but they also have an extremely casual relationship — Frankie calls her both "dude" and "Sam," while Max tells her mom the intricacies of her sex life. Only Duke is still openly affectionate with Sam, and that's happening less and less as she matures.

But Frankie has been particularly irritable recently. In fact, the two had an exceptionally heated confrontation in Season 2, Episode 8, where Sam was forced to listen to Frankie's abusive tirade at Push's bar mitzvah. Neither party really apologized, and the episode ended with Frankie locking Sam out of the house — a clear metaphor that she's being shut out of her 13-year-old's life.

While they certainly have their affectionate moments, this failure to connect is unfortunately par for the course and is to be expected when raising daughters. So although no one wished Sam a happy Mother's Day and she never got that apology from Frankie, oftentimes things go left unsaid. That, too, is part of being a mom.

More like this
Martin Hancock’s Wife Played A Key Part In His Return To 'Coronation Street'
By Catharina Cheung
Why Sadie Sink Is Hopeful Max Will Return In Stranger Things Season 5
By Brad Witter
6 Mind-Blowing Fan Theories About How Stranger Things Will End
By Kadin Burnett
What Working At Marvel Is Really Like, According To A 'Ms. Marvel' Co-Creator
By Gretchen Smail
Get Even More From Bustle — Sign Up For The Newsletter