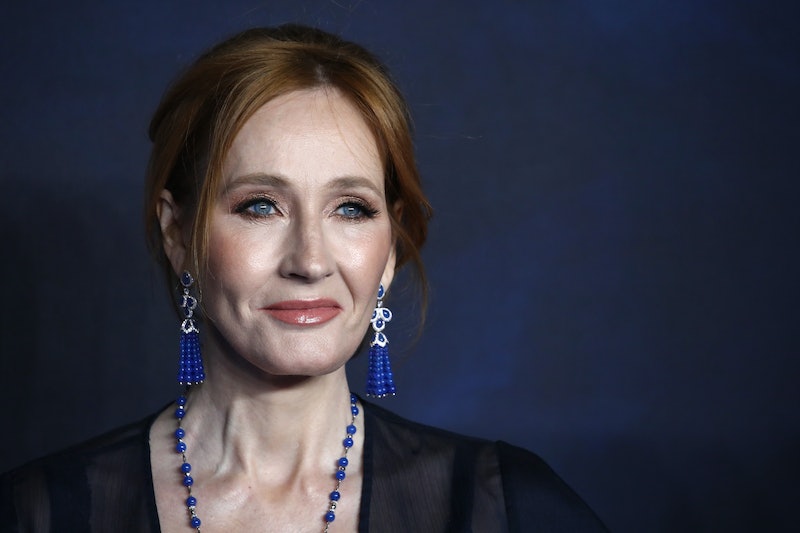 In situations involving great romance, it's always best to pull a line from a Richard Curtis film. So, to quote Hugh Grant: "Love actually is all around". And, y'all, when it comes to JK Rowling's books, love isn't just around, it's also super inclusive. Rowling has long dropped exciting hints about the relationship between Hogwarts' main man Dumbledore and the magic world's pre Voldemort baddie, Grindelwald — but not she's just dropped a serious bombshell. Yes, giving fans the truth as ever, JK Rowling has confirmed that Dumbledore and Grindelwald had a sexual relationship. Yes! Get it, Dumbledore.

Back in 2007, the Guardian reports, JK was speaking at an event when someone asked: "Did Dumbledore, who believed in the prevailing power of love, ever fall in love himself?" In response, the author said:

"My truthful answer to you ... I always thought of Dumbledore as gay. Dumbledore fell in love with Grindelwald [a bad wizard he defeated long ago], and that added to his horror when Grindelwald showed himself to be what he was. To an extent, do we say it excused Dumbledore a little more because falling in love can blind us to an extent, but he met someone as brilliant as he was and, rather like Bellatrix, he was very drawn to this brilliant person and horribly, terribly let down by him."

However, while we've known that Dumbledore was gay for some time, and that he had feelings for Grindelwald, the Hogwarts headmaster remained a kind of desexualised, avuncular character. That is, until the extras on the Blu-ray disk for Fantastic Beasts: The Crimes of Grindelwald came out, and JK dropped this amazing nugget of info, as Pink News reports:

"Their relationship was incredibly intense. It was passionate, and it was a love relationship. But as happens in any relationship, gay or straight or whatever label we want to put on it, one never knows really what the other person is feeling. You can’t know, you can believe you know. So I’m less interested in the sexual side — though I believe there is a sexual dimension to this relationship — than I am in the sense of the emotions they felt for each other, which ultimately is the most fascinating thing about all human relationships".

When the Fantastic Beasts franchise was announced and it was revealed that Dumbledore would be starring in them along with Grindelwald, there was much speculation as to the storyline and how the two would interact.

Fans were shocked when, in January 2018, the Fantastic Beasts' director David Yates told Entertainment Weekly that Dumbledore's sexuality would "not explicitly" be addressed in the film.

However, later that year, Yates spoke to Empire, feeling he had to clear up any suspicions that they were going to ignore Grindelwald and Dumbledore's closeness. The director said:

"In that earlier interview, I didn’t say Dumbledore’s not gay. He is. This part of this huge narrative that Jo is creating doesn’t focus on his sexuality, but we’re not airbrushing or hiding it."

So how was the relationship shown in the film in the end? It was clear through various visions and a lot of wistful looks that the pair had a deeper connection. However, like lots of same sex characters on screen in the past, the couple's relationship wasn't given a name nor were they allowed to kiss. Many fans felt angered by the straight-washing of their relationship in the film, and some even believed that the studio bosses wanted their relationship to remain vague for the sake of international sales, according to Forbes.

However, there is hope. There are three more films left in the Fantastic Beasts franchise, so perhaps that means we will see more of the romantic and sexual dynamic between Dumbledore and Grindelwald. I mean, can you imagine how great that would be?